An Abundance of Change 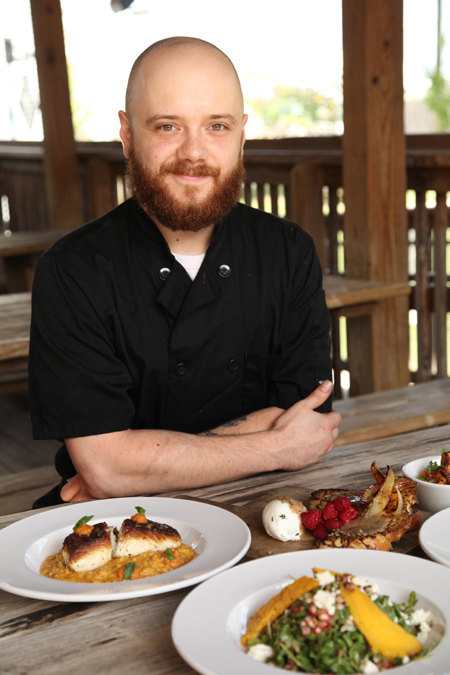 River Rat Brewery is stepping up its fare game with a new chef serving dishes you would not expect from a brewery. Chef Jonathan Cooper, formally with Tazza Kitchen, joined River Rat Brewery earlier this year and is making his mark on the fall and winter menu.

Raised in a culinary family, Cooper’s interest in food started at a very young age. Helping out with the family restaurant taught him the different aspects of running a restaurant and sparked his desire for a life-long career in the fast-paced and intense restaurant world. Setting out on his own at 17, he was managing a kitchen by age 19. The self-taught chef then went on to work in well-known restaurants throughout Columbia, reading as much as he could about running a kitchen and cooking, and striving to be the best. “When you become manager it’s a lot less cooking and it’s more about managing attitudes and stress and providing a good environment that people want to work in,” says Cooper – and he is doing it right.

Inspired from a variety of cuisines and chefs, the dishes on the fall menu are not what you would typically see on the menu at a brewery or bar. Cooper demonstrates his creativity and drive for perfection with a menu that includes farm-to-table and unique ingredients, such as a variety of local grits, tortillas made from scratch daily, local produce and bread made with grain from the brew kettles.

Items popping up on the new menu will include candied sweet potatoes and candied bacon, cubed and roasted in the oven with a Romesco sauce made with pecan, pepper, tomato, parsley, oil and fresh lemon juice, topped with fresh basil.

There also is a light and comforting arugula salad making a debut on the menu, complete with pomegranate maple dressing comprised of freshly crushed pomegranate juice, maple syrup, fresh lemon juice and oil. It is topped with acorn squash roasted in maple syrup, butter, salt and pepper, feta, pecans and fresh pomegranate kernels.

Pumpkin pie fans will love Cooper’s favorite seasonal entree of pumpkin spice risotto made with fresh puree from pie pumpkins, cream and pie spices. The risotto also has the unique River Rat flare by being prepared with a lager instead of the traditional white wine. Topping off the pumpkin risotto is a pan-seared tilefish or halibut lightly seasoned with butter and thyme making it the perfect dish on a crisp fall day.

It would not be fall without apples, so Cooper created a dessert incorporating honey crisp apples and pears with all spice, clove, brown butter and cinnamon. It’s plated with made-from-scratch whipped cream, a ginger snap and fresh herbs.

If fall flavors are not your thing, you can still find menu staples such as the mouth-watering brisket mac n’ cheese, burgers, sandwiches, barbeque and more. They are not permanent fixtures on the menu for nothing and are always the crowd pleasers.

There is more promising change going on at River Rat Brewery than just a new, seasonal menu. With football season in full swing and the holidays right around the corner, “there is an abundance of change happening that we are excited about,” says Cooper. River Rat Brewery created a unique and fun-filled environment for tailgating and watching home or away games. You can sit outside in beautiful weather while still catching all the games or sit in the comfort of the taproom without missing a play. University of South Carolina home game Saturdays will feature a limited menu to ensure each dish comes out quickly and as delectable as Cooper intended. 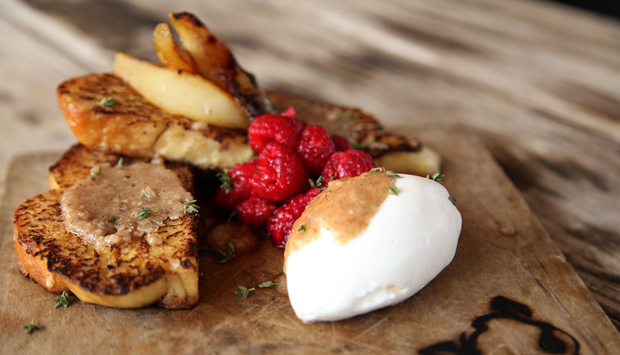 Catering is also in full swing at River Rat Brewery. The brewery holds its own special events such as their famous oyster roasts, and also rents out spaces such as the garden, patio and silo for your special occasions. The catering menu offers different options than the regular menu and is customizable to each client’s taste and budget.

Cooper is proud to have brought scratch and farm-to-table cooking to River Rat Brewery and also credits his staff for making it all possible. The staff prepares as much food as they can during the week to ensure the hectic weekends go as smoothly as possible. They are always trying to get better and improve the experience for the customers. You can always find positive change happening out front and behind the scenes at River Rat Brewery.