Springing forward isn’t just about Daylight Savings Time. This year, consider springing to one of these six destinations, where new cultural attractions, lodging options and other diversions have popped up just in time for spring. 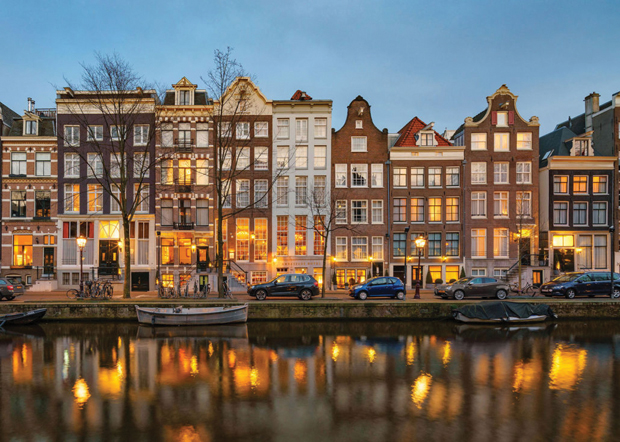 If all you’ve seen of the Dutch capital is the inside of Schiphol airport as you dash to your next flight, you’re missing out on one of Europe’s most underrated destinations. That’s because tiny Amsterdam is packed with enough history, culture, culinary surprises and funky fun to satisfy even the most curious traveler.

Get a sense of it all with a boat tour of the city’s half-moon canals, which wind past 17th-century canal houses and houseboats, under graceful bridges and into the surprisingly modern harbor. Next, step into history at one of Amsterdam’s 92 museums, which showcase everything from priceless works by Rembrandt (Rijksmuseum) and Jasper Johns (Stedelijk Museum) to pocketbooks from the 16thcentury (The Museum of Bags and Purses), stories of the Dutch Resistance (Verzetsmuseum) and ancient Bibles (Biblical Museum). Springtime means tulips; Vondelpark blossoms with 30,000 bulbs planted last fall by local schoolchildren. For an even bigger spectacle, cycle over to the town of Keukenhof, which comes alive each year with a collection of themed garden “paintings” crafted from seven million live blooms.

Amsterdam is a city of neighborhoods and each has its own personality. Jordaan is a former working-class district that’s been transformed into a hip shopper’s paradise, filled with shops, galleries, cafes and outdoor markets. Just east of city center, leafy and elegant De Plantage is home to Hermitage Amsterdam, which is the Dutch outpost of the famous Russian museum, as well as Waterlooplein, a massive outdoor flea market and the city’s botanical garden.

Refueling is easy with traditional Dutch snacks like Bitterballen (fried meatballs) and Pataat Speciaal (fries topped with curried ketchup, onions and mayo) and, of course, Gouda cheese. But there’s more exotic fare as well, most notably Rijstaffel, a Dutch-Indonesian mashup of spicy-sweet Indonesian dishes, each served in small dishes and eaten with rice.

Amsterdam’s atmospheric canal house hotels combine several structures into one hotel, that rambles its way down the block. Each of the 56 rooms at the Ambassade is individually decorated with details like beamed ceilings, large bathrooms and sitting areas.

There’s a moment that strikes soon after you arrive on Ambergris Cay in Belize, when you realize that something is missing. It’s not pretty beaches—this 25-mile long spit of sand is dusted on both sides with white sand that gives way to clear, calm water. Nor is it a lack of atmosphere. Instead of taxis, visitors and locals hop aboard speedy skiffs, which zip through the sea at all hours. In the funky town of San Pedro, waterfront bars like Fido’s hum with energy and, after about 10 p.m., the line for fish tacos begins to form at the food cart on the lively town square. That’s when you realize that this modern but mellow destination is actually delightfully lost in a time warp. It doesn’t have high-rise hotels, fancy restaurants or casinos. Instead, low-key resorts speckle the island and evenings are spent nibbling lobster pizza from a hammock as you wait your turn for the beachfront pool table at Rojo Lounge.

But Ambergris doesn’t suffer from a lack of things to do. For snorkelers, a visit to Hol Chan National Marine Reserve is a chance to see beyond clouds of bright tropical fish to A-listers like manatees, tiger, black tip and lemon sharks, loggerhead, hawksbill and green turtles, dolphin, spotted Eagle Rays and silky green Moray eels. Bonus: it takes just 10 minutes by boat to get there. Or head to the jungle. Tropic Air’s fleet of nimble planes have you on the mainland in a matter of minutes, where you can kayak or tube through caves filled with ancient Mayan artifacts, Zipline over deep crevasses, climb to the top of a centuries-old citadel or hike through the rainforest in search of elusive jaguars and ocelots.

If this were high school, Santa Fe might be voted best all-around.  Dramatic big-sky landscapes draw artists and dreamers, mountains at its doorstep lure outdoor enthusiasts and history buffs can explore centuries of Native American, Mexican and Spanish culture. Constructed in 1610 as a fort, Santa Fe’s sun-splashed Plaza remains the epicenter of the city. Outside, under the shady portico, up to 118 Native American artisans gather each morning at 8 a.m. to sell traditional jewelry, pottery, metalwork and other craft works. The Portal Native American Artisans Program was founded in the 1930’s and is highly regulated: artisans must create the work themselves using traditional materials.

Adjacent to the Palace is the New Mexico History Museum, which tells the story of Santa Fe and New Mexico through period photographs, artifacts from archaeological sites, artwork and oral histories.  Located about two miles from the Plaza and accessible via free shuttle, Museum Hill’s five museums make it easy to delve even further into Santa Fe’s varied culture. Most offer free docent-led tours, sell one-of-a-kind works in their gift shops and offer interesting, hands-on activities for kids.

Sporty types will want to explore Santa Fe’s Dale Ball Trail System, which offers everything from a shady meander to a high-altitude romp all the way to Santa Fe Ski Basin 16 miles away.  Plenty of trailheads less than two miles from the Plaza lead to well-marked paths; the Picacho Peak trail runs through forests of pinon and Ponderosa Pine on its way to stunning views of Mt. Taylor, which was sacred to the Navajos, and Santa Fe itself.

Local art and ornate tile mosaics fill the atmospheric rooms at the Inn of the Five Graces, which are also outfitted with kiva fireplaces and oversized bathrooms with deep soaking tubs.

The city of Oscar Wilde, J.R.R. Tolkien, C.S. Lewis, the University of Oxford and, through the magic of movies, Harry Potter, may be best known for inspiring intellectuals.  But the merely curious will find happiness in the city’s charismatic pubs, side streets and alleyways as well.

Walking is the best way to get lost in the warren of streets that comprise the downtown and lead past buildings from the 11th century to the present. Some, like the circa 1749 Radcliffe Camera, a circular library, are open only to students. Others, such as the emerald-green quad at Lincoln College (which is surrounded by 15th-century buildings) and the circa 1040 Saxon Tower (which you can climb), can be enjoyed by anyone.

Many museums are equally welcoming, charging no fee to see their remarkable collections. The Ashmolean Museum, which opened in 1683 and is considered England’s oldest, is home to the Alfred Jewel, which crowned King Alfred the Great’s scepter during his 9th-century reign; drawings by Michelangelo and Raphael (which require an appointment to view), paintings by Pissarro and other treasures. The Pitt Rivers Museum is unique in that its vast collection of archaeological objects is arranged by type—weapons, musical instruments, tools—instead of by date or geographic area, allowing visitors to compare how different cultures dealt with similar issues.

Don’t miss the guided tour of Christ Church College, where you can lay eyes on the staircase made famous by Harry Potter; the locked garden door that inspired scenes that Charles Dodgson—aka Lewis Carroll—included in Alice in Wonderland and the colossal Grand Quadrangle as you hear more than 500 years’ worth of stories and legends.

The three stone buildings that comprise the Old Bank hotel served as shops, a hospital and an apothecary before they were converted to a bank, and, finally, a 42-room hotel. Today, modern art from the owner’s private collection fills the sleek rooms.

Boston welcomes visitors with an abundance of big-city diversions like its stunning public garden, historic seaport and Faneuil Hall. But think about taking in a few local traditions as well. One is the Gardner Museum. Visit on a Sunday and you can spend the morning exploring this treasure trove of art collected over a lifetime by Isabella Stewart Gardner and the afternoon at a concert series that began in 1927. Look for the empty frames hanging on the walls: they’re a reminder of the 13 priceless works by Rembrandt, Vermeer and others that were stolen from the museum in 1990. It’s the biggest unsolved art theft in history.

Baseball mania kicks off on April 5 with the Red Sox home opener at Fenway Park, one of just two old-school Major League ballparks remaining in the U.S. If you’re more into the lore than the score, take the hour-long guided history tour, which is offered each day or, on game days, the pre-game tour, which includes a chance to dangle your legs over the Green Monster. A more sedate local custom is afternoon tea within the arcaded gallery that surrounds the Boston Public Library’s stunning Italianate courtyard. Afterwards, stroll through the magnificent building and take in its exquisite architectural details and art collection.

Jim Koch has been making beer in Boston since 1984 when he brewed up the first batch of Sam Adams Boston Lager in his kitchen. Today, Sam Adams is brewed in a state-of-the-art facility that offers an expanded menu of experiences like a beer and cheese pairing, a barrel room tour and a tasting of experimental beers.

Set amid the Back Bay neighborhood’s galleries and boutiques, the Mandarin Oriental makes it easy to explore the city. Crisp rooms in pale neutrals have sitting areas and marble bathrooms.

There’s a reason why Pebble Beach is synonymous with golf. Not only is this coastal enclave carpeted with seven golf courses, but those courses have been home to some of the most prestigious golf tournaments in the world, including the U.S. Opens, a PGA Championship and AT&T Pebble Beach Pro-Am, which has been played every February since 1947. Still, it’s visitor friendly. Six of those courses are public and while you’ll spend more than $500 to hit the tees at the Pebble Beach Golf Links, greens fees at the 9-hole Peter Hay are just $30. There’s also a lot more to do besides play golf.

Within Pebble Beach, iconic 17-Mile Drive meanders around the peninsula and into the fragrant Del Monte Forest. Along the way, you’ll pass wide sandy beaches, sea lions lounging on craggy rock formations, glorious vistas and the Lone Cypress, which sits on a craggy bluff that juts into the sea. If the weather’s pretty, consider cycling the route instead of driving or taking a trail ride on one of the resort’s particularly well cared-for horses.

Just south of Pebble Beach, Carmel-by-the-Sea sits at the edge of the ocean and is filled with galleries, shops, restaurants and tasting rooms where you can try wines from some of the region’s celebrated wineries. In Monterey, more than 35,000 fish and other sea creaturesâ€•including Pacific octopus, sharks and sea turtlesâ€•birds and plants live within Monterey Bay Aquarium’s massive watery habitats.

Pebble Beach Resort has four separate lodging options: The original Lodge and Fairway One overlook Stillwater Cove and offer the easiest access to the spa and other amenities. Six miles away, the Inn at Spanish Bay sits on the edge of the Pacific; each night, a bagpiper welcomes the sunset as he or she walks along the coast. Casa Palmero is a boutique hotel set amid a blooming garden. No matter which you choose, you’ll have free access to 17-Mile Drive, the resort’s 25 miles of trails and two hours’ use of a Lexus.