A Craftsman and His 3-String Guitars

One-of-a-kind instruments that integrate painting, woodworking and an artist’s refined eye for detail 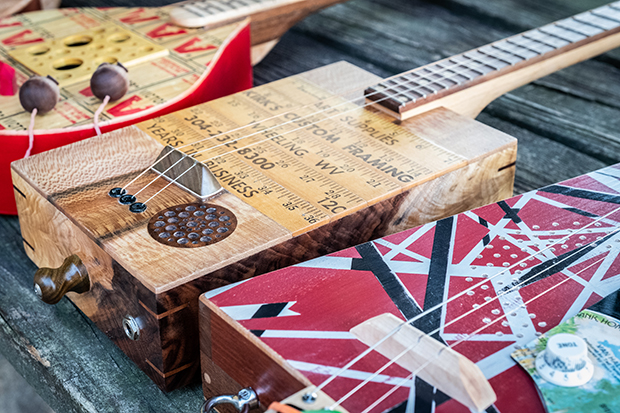 Kirk Fry came to guitar making through the backdoor, being a lifelong artist, turned craftsman. After a friend asked him to take his woodworking class to fill up the seats, Fry discovered a passion for woodworking that has carried him forward.

His creations may seem a strange thing: a 3-string guitar, an instrument of 19th century Cuban origin first used by Afro-Cuban musicians. But like all guitars, each string can sound all 12 notes in a musical octave.

What’s different about Fry’s instruments are their remarkable designs, incorporating household objects such as yardsticks and mouse traps, with semi-exotic and locally harvested woods, with themed pieces like his “Frankenstrat” guitar, crafted as a tribute to guitarist Eddie Van Halen.

According to Fry: “I probably made three guitars and was going to take a big break, then Van Halen died. I remembered a guitar he created and named for the Frankenstein character. He cobbled this thing together, painting it by masking with electrical tape. It had so many interesting features, it was just too hard to resist, so I did a little acoustic-electric version.”

Other guitars have come about by reimagining ordinary objects. “The first one I made was out of a yardstick I’ve had for 20 years,” he recalls. “I build it into the body of this guitar and that was the first conceptual one I made, so that was fun. Some are just ‘mountaineer’ or folky. I’ve also made a snake-theme and a skull-theme guitar.”

“I was looking for something in a drawer and there was a mousetrap.” he continues. “I decided to make a guitar that had mousetraps with a Swiss cheese sound hole. The sound hole is a very important graphic feature – it’s like the heart of these guitars. The volume knob and tone knobs are mice that are carved out of walnuts – that’s how a lot of the ideas for these things come together.” 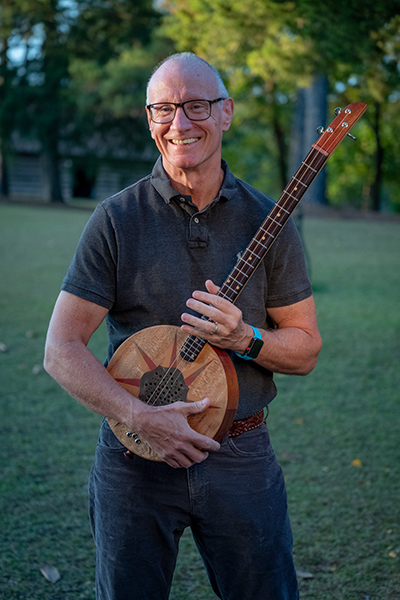 Ever mindful of good craftsmanship, Fry gets satisfaction out of putting something together that works, so that when you stand back and look at it, the design is balanced with the quality high enough to where it’s visually appealing and feels right.

“I like to refine things,” he acknowledges. “There’s probably way more time in these guitars than I’d like to admit. If you turn them over on the back and the sides, there’s fine woodworking. They’ve got a nice, comfortable carved neck, which is a little step up from what’s typical. And like with anything I make, there’s a lot of research involved.”

His instruments have acoustic pickups, devices that convert string vibrations into electrical signals for use with an amplifier. “You can hear them without an amp,” he explains. “Some are louder than others, of course the smaller bodies don’t have as much volume.”

As technically correct as his instruments are, Fry has never considered himself to be a luthier, the proper name for a maker of guitars. “I’m more of a woodworker and I learn as I go,” he admits. “I usually have an idea then go on YouTube to figure out the technique.”

A graphic designer originally from Wheeling, West Virginia, Fry moved to Winston-Salem in 1989. “I started drawing when I was three years old,” he says. “I went to the Art Institute of Pittsburgh back in the 1970s. My first job was art director at TV station, and I moved on to agency work from there.”

Always a lover of music, Fry played violin in school, then in his late 30s, he picked up a mandolin and started playing. But he came to the realization that he wasn’t cut out to be a musician – he was just more dedicated to visual arts.

“My creative value was coming up with ideas at the start of projects,” he says. “I now run a graphic design company called the Mill Creative Manufacturing. I’m kind of a one-man show with my wife helping me with the business and account services side.”

“I have the drive for making things with my hands. If I don’t have a project in the shop, I lay in bed thinking about what I’m going to do next. With guitars, I’m able to combine so many things I’ve done over the years, integrating painting and carving in the construction. That’s how I ended up getting hooked on making them.”

Fry’s been in a couple of shows in Winston-Salem, exhibiting at Sawtooth Center for Visual Art last summer, and at the Southeastern Center for Contemporary Art (SECCA) in a sideshow of work inspired by Freeman Vines, a North Carolina-based artist, guitar maker, and one-time blues musician who makes sculpture out of old wood.

This craftsman has certainly found a niche, and no one’s doing exactly what he’s doing which really makes his work stand out. “I try to come up with something new and then there’s the overall aesthetic of it,” he says. “Once I get there, you can’t help but have something that’s different from what other people have done.”

“I’m just looking for people to play them. I’ve had a few musicians pick them up and play them pretty easily. They’re tuned in the G chord, which is pretty common. At first, they wonder what it is and are kind of surprised by the instrument. In any case, they seem to have fun.”

His next piece is going to be a four-string tenor guitar, tuned like a mandolin, the theme based on Winston-Salem. “I’m still trying to work out the details,” he says. “The metal work around the sound hole will have ‘WS,’ centered almost like a basket weave. It’s just a graphic that I’ve had for a while.”

“So far, that’s really the only Winston-Salem part of it, but that could change. Right now, the design is kind of old-timey looking and it’s going to be mahogany and white oak, which will be a nice contrast for the woods. I may age this one.”

“My pieces might be around for a long, long time,” he reflects. “That’s the thing about creating something built to last. Years from now, people will still talk about them and maybe I’ll be remembered for some of the objects I’ve made.”