Lee Snelgrove, executive director of One Columbia, has been at the forefront of the effort to increase the visibility of Columbia’s creative talent since 2012. Now, One Columbia will be able to expand its contributions by its designation as local arts agency by Columbia City Council.

Crossing Columbia these days, whether walking down Main Street, traveling by bus, or driving along an avenue, people are wonderfully struck by vibrant murals, sidewalk art, and bus poetry, all works of dynamic local artists, yet thanks largely to the leadership of one individual -- Lee Snelgrove, local mover and shaker in the capital city’s art scene.

Snelgrove, executive director of One Columbia, is a creative force of his own, now achieving new momentum through the backing of Columbia City Council, ensuring even more energy and synergy with the organization’s designation as “local arts agency.”

Nationally, there are 4,500 local arts agencies that promote, support, and develop the arts at the local level, ensuring a vital presence for such programs in communities and making them more widely available to all residents.

One Columbia for Arts and Culture has been at the forefront of the effort to increase the visibility of Columbia’s creative talent. Of Snelgrove’s contributions, Columbia City Council Member Howard E. Duvall, Jr., says, “He has done a wonderful job with One Columbia coordinating many of the public art projects around the city. I sometimes think One Columbia should be called One Snelgrove. Lee has had very little staff to help with building the arts and culture in the Midlands.”

Now, One Columbia will be able to expand its contributions by its designation as “local arts agency” by Columbia City Council. In doing so, Duvall says City Council is following up on a recommendation from a comprehensive city-wide arts plan called Amplify, launched in 2018 with wide civic and corporate support. “We will follow up this first step with a resolution,” he explained. “In addition, the city will look for increased funding for One Columbia to allow for the staffing required by the new responsibilities.” The designation will allow One Columbia to seek additional funding from public and private sources like the National Endowment for the Arts. These funds will be regranted to local organizations.

In the study’s report, Mayor Steve Benjamin noted, “The arts play a huge role in attracting visitors to our city and are also essential to the health and well-being of our citizens. Our incredible museums, historic sites, theatres, libraries, dance, and music organizations help make Columbia one of the best places to live. Arts and culture are a vital part of the economic growth, vibrancy, and livability of Columbia.”

Since 2012, One Columbia, under Snelgrove’s leadership, has been a dynamic force in making the work of local artists more visible and accessible. As a result, Columbia residents and visitors have enjoyed more outdoor festivals and events and have seen a dramatic rise in new public art projects. They have also benefited from innovative collaborations between the public and private sectors to bring more art to more people. 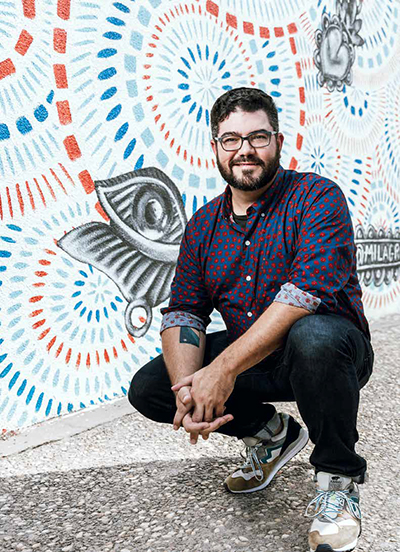 A congenial and persuasive dynamo, Snelgrove brought a sense of civic responsibility when deciding to make the capital city his home. The son of a civil engineer, Snelgrove initially considered a technical career at an out-of-state institution, but he chafed at the limitations of the prescribed curriculum there and instead chose USC’s prestigious Honors College, allowing allow him to chart a different course. Becoming a permanent resident, he made a personal commitment to do his part on behalf of the community. That he has done as a one-man show in his own right as a city advocate. As part of his DNA, Snelgrove brings both left-brain and right-brain aptitudes to any task with an analytical and methodical approach to promotion and a creative appreciation for artistic expression.

“It has been a privilege to work with so many artists and arts administrators to increase the prominence of this city’s cultural community,” Snelgrove said. “Columbia has a wealth of talent. I’m so happy to have been a part of recognizing and celebrating the people that make this city great.”

USC English Professor and Columbia’s Poet Laureate Ed Madden says Snelgrove is not only a leader with vision, he is also someone who does the work, gets his hands dirty with chalk and paint, delivers the sound equipment, and sets up the tables. “He is an incredible collaborator and believes deeply that everyone should have access to the arts,” he said.

Through One Columbia, sponsored visible art was a huge mood booster during the pandemic. Now that COVID-19 is being contained, Snelgrove is looking forward to renewed vigor across the arts spectrum from events to exhibits through the city’s designation of the organization as local arts agency,

Current Position: Executive Director, One Columbia for Arts and Culture

Favorite Quote: “My life amounts to no more than one drop in a limitless ocean. Yet what is any ocean, but a multitude of drops?”