A Grand Design for Living

This is one amazing home, with Italian influences and plenty of space for everyone’s interests. 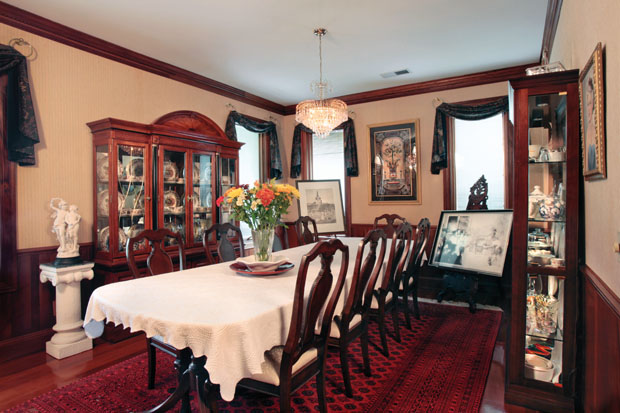 One look at the house at 2555 Rainbow Drive in Springdale and you know you’re in for an adventure. Two larger-than-life personalities have created a unique showcase for art, theater performance, and their zest for living. They’re willing to share it with recitals, club meetings, fund-raisers, and even weddings, so walk through the carved mahogany doors with expectations and an open mind. You’re likely to be dazzled.

Roland and Ilsa Young have been participating in, and contributing to, the Midlands’ cultural life for many years. While he earned a living as a long-time State Farm agent in West Columbia, he was indulging his interest in building design, with an eye to frequent entertainment events for groups both large and small. It was actually the U.S. Navy which stirred his creative juices, by sending him to Naples, Italy for a year in the 1950s. He was “blown away” by the architecture surrounding him, and soon started making notes: arches, turrets, carved moldings, handsome marble and mahogany, all designed to endure through the ages. The American sailor was fantasizing about Michelangelo.

Fast-forward to the 1980s. The Navy veteran, born in New York, had migrated to Savannah, and later to Columbia. As his business and his family grew, he bought 10 acres in Springdale for his future home. Plenty of space for gardening, landscape design, even possible to have horses on the property.

Pretty quickly, it became evident to Roland Young that his dream castle was going to require some serious planning. He talked with architects, only to find that they usually wanted to impose some other elements in his structure. He found the means to get it done his way, by enrolling at Midlands Tech and taking architecture and design courses, fleshing out the pipe dream that had been born in Italy. 2555 Rainbow stands today as he envisioned it, spacious and impressive and absolutely unique. Hundreds of art aficionados in the Midlands can testify to experiencing this monument to creativity offered by the Youngs, completed in 1987 and a community landmark ever since.

Part of the property has been sold off, and the estate is now five acres, protected by security fencing and electronic access. A circular drive marks ample parking and easy access to the European-style (what else?) double doors. Centerpiece of the structure: a 25-foot “performance room,” featuring a mirrored wall, a grand piano, large Italian and French posters and art, and space for 60 or more chairs facing the entertainers. Talk about GRAND Opera! It could have been invented for this space.

For daily life, this room accommodates large comfortable furniture facing a massive stone fireplace wall. Roland Young did a lot of scavenging for these stones, all transported to this site from nearby river and quarry loci. Backed up to this installation is the wall of the master bedroom, featuring a similar floor-to-ceiling structure made of marble brought from Italy. The free-form coffee table is made of marble from Pompeii; resting atop it, a marble sculpture picked up on a trip to Alaska.

River rocks serve underfoot as the flooring of the sunroom which overlooks the large rear garden featuring a swimming pool and massive stones brought in from other areas of our state. This, along with the adjacent patio area, is where weddings and outdoor entertainment take place.

The homeowner made sure to include a workshop in these grandiose plans. There, he put his carpentry skills to work fashioning crown molding and cornices throughout the house, using what he described as two miles of board feet of mahogany imported from Peru. Pocket doors are seen these days mostly in old houses; Roland made them for his new home, saving space and adding style.

He made the bookshelf-wall which houses part of their eclectic collection of art works. I.E.: brilliantly-painted pieces done by “The Picasso of Cuba,” a fellow named Fusqua. One disc turns out to be done on the back of a 78-rpm vinyl record; another is a painted vodka bottle. (Canvas and art paper were scarce commodities in 20th-century Cuba.) On another shelf, a collection of South Carolina glassware, bottles gleaned from the site of the Confederate Printing Plant on Gervais Street in Columbia in the late 20th century before the construction of the condo building there. History is where you find it.

The most important event ever held at their fairy-tale garden dates back to 10-and-a-half years ago, when Lisa Kahn and Roland Young were married there. Second marriage for both, they invited 400 friends for the occasion. Actually 500 showed up. They’ve been celebrating ever since.

A mutual love of theater drew this couple together. Lisa, long active in Workshop Theater and Columbia Opera Guild, has sung and acted in about 70 shows over the years. Man of La Mancha, Singin’ in The Rain, Annie, Fiddler on the Roof, Sweeney Todd … the list goes on. Roland was in the cast of Fiddler and of Sweeney Todd; the attraction was immediate. They do not perform any more in public, but attendance and support for Columbia’s theater offerings continues. They are regulars at the twice-monthly meetings at Villa Tronco, one for Opera, one for Broadway. Lisa serves as treasurer of the Columbia Opera Guild.

Ilsa and Roland’s blended family includes a son, two daughters, four grands, and two great-grands. Now that they have put their performance careers behind them, they are ready to downsize. 2555 Rainbow Drive is up for sale, waiting for the next adventurers who can visualize a life of joy and community service in the house that imagination built.