A Taste of the Continent

The transformation was profound. The results? Perfection! 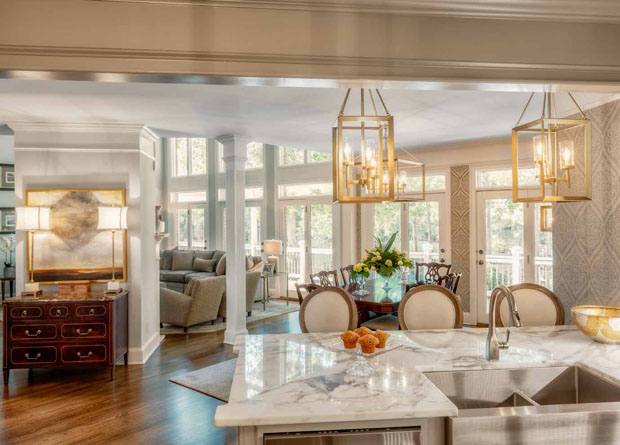 After 44 years of marriage, Myron and Janice Jennings have fallen in love for the first time.  Not with each other, mind you.  They’ve been in love since they were teens. But this is different.  This is a house.  And they couldn’t be happier.

Walk up the beautiful brick steps of this charming red brick home on Lake Murray and you expect a lovely interior.  Once inside, however, you feel as if you’ve stepped inside a fine European resort, and that’s by design.

“Myron and Janice are passionate about Italy and enjoy spending time in Paris as well, so it prompted me to give them a bit of those surroundings in their everyday lives as well,” said Joe Stuart, their designer.  “Although we worked to source locally whenever possible, much of the marble and tile work was quarried in Italy and there’s a definite European feel.” He frequently sources his marble and tile from ProSource, and accessories from Meeting Street Interiors.

When Joe, the principal designer with Privé Design Group, was asked to work with the Jennings (via mutual friends), he expected a fairly typical renovation and refreshment.  Instead, the couple decided to get rid of clutter and really start fresh.  “We got rid of a lot of stuff,” Myron shared.  A few family heirlooms remain, but they’ve been blended seamlessly with antiques and new pieces that have helped transform the spaces.

“We kept the footprint of the house, which was built by the Jennings in 1992,” said Joe. “We kept the rooms intact for the most part, but we eliminated doors, enlarged doorways and made the house much more open and accessible.”

Most downstairs rooms are painted Olympus White with complementary accent colors, providing a soothing and serene atmosphere after the workday is done. Carpeting was removed, as were the older marble floors in the master bedroom and foyer. New hardwood floors were installed in those areas, and then all of the floors were conjoined, sanded and covered with Jacobean and then satin finishes.  Custom rugs were designed to match the angles of the rooms.

The foyer sets the stage, with doors and passageways on an angle – a design element repeated throughout the house.  Joe found the marble-topped chest which holds a cherished wedding gift.

The stairs curl around to the second floor, transformed from dark to light, with a lovely light fixture in the center. Its striking mixture of metal and glass is echoed throughout the home, often accompanied by mirrors with European-inspired metal framing.

To the left is the couple’s master bedroom, holding an expansive rug to add warmth and comfort. Large windows open onto Lake Murray, through a new pergola which can be accessed from the bedroom.  Two paintings that Joe purchased in Italy set the tone for the space, a combination of soothing brown, beige and gray.

Their master bath is Myron’s favorite, with silver strand Italian marble tile, and silk wallpaper covering the walls which looks like damask fabric.  New millwork enhances the facing sinks, surrounded by quartzite in “Fantasy Brown.” The Italian marble floor tiles complement the stone and wood finishes in the room.  A large glass shower has a luxury feel, but the show stopper is a huge soaking tub.  “That tub is actually my favorite element in the house,” says Myron, noting that it’s big enough for relaxing at the end of the day.

Back across the foyer, one opening leads into the dining room with an extensive table adorned by two massive blue temple jars Joe sourced from an estate sale in Palm Beach.  A painting anchors one wall, and a custom hutch fits one of those room angles and showcases china and crystal. The angled rug design is echoed in the mirror and upholstery on the chairs.  Polished, tasteful, appealing.

Around the corner, a short wall helps define the living room, and holds a perfect marble top chest.  Not too big, not too small, but just right.  Paintings are soothing and modern, with hints and shimmers of the water just outside.

With an overlook from the stairs and tall ceilings, the living room feels much larger than it is. A giant mirror covers one wall.  Two custom sofas, one oversized to accommodate the room, are matched with three more chairs, creating seating for at least ten or more.  The focal point is the fireplace, rebuilt and elegant. The chest belonged to Myron’s mother.  It holds accessories that sparkle and delight.  There are no window treatments.

“I am really someone who favors gorgeous window treatments, but here, the lake view is the thing and these windows have beautiful molding and stand on their own,” explained Joe.  That wall of windows leads to a breakfast area.  The wallpaper here is printed linen.  In the public spaces, everywhere you turn are light fixtures that perfectly fit each space, and frequently, mirrors that add more sparkle.

On another angle, what was once a dark kitchen is now a pale gray chef-style work space.  Very rare Calcutta marble can be found in both the kitchen and the living room.  Cabinets which blocked the view between those two rooms were removed, and the marble-topped island seating invites conversation with the cook, while sharing a glass of Italian red wine.  Ample storage is tucked away underneath, more than making up for the now-gone cabinets that impeded conversation rather than encouraging it. The kitchen backsplash is warm brown reverse painted glass tile, which, when lit from above, reveals a dancing liquid effect.  “Now this is my favorite room in the house,” said Janice, adding, “even though Myron does much of the cooking.”

French mirrors front one cabinet, keeping the glass design intact, but providing a space for items to be tucked away. The laundry room and guest half bath are just off the kitchen.  A large painting dominates the bath and originally belonged to a mutual friend.

Back in the breakfast area, a door leads to a guest bedroom with private bath. It completes the back length of the home where every room enjoys waterfront views.

With their daughter grown and married with three young ones, it’s the grandchildren who’re being catered to now.  Upstairs holds their daughter’s bedroom with a bath, accessible from the bedroom or the hall.  Window seating used to be covered with everything a teen would ever want to display.  “It was like a second floor master and our daughter loved it when she was younger,” shared Janice.  There’s also another room, which Janice calls the ‘antique bedroom’ because it holds old collectibles from their lives.

Around the corner, a door leads to a playroom for the children.  Like much of the downstairs, Joe had it painted Olympus White, a Sherwin Williams color favored by Jackie Kennedy when she was redecorating the White House. Black and white portraits add a nice touch. Someday, it may turn into an adult room again, but now it’s a place for toys, games and children’s laughter.

Back downstairs, the wine is poured and Myron, Janice and Joe reflect a bit on the process.  “We’ve been in this house for 27 years, and although we always liked it, this is the first time we’ve both been in love with our home,” said Janice.  Myron agreed, adding that it’s a relaxing and peaceful retreat after work each evening.

As for Joe, he has loved overseeing the creative transformation.  “It’s a designer’s dream to start with a blank slate,” he said.  “To be able to provide a fresh look that evokes their love of travel as well as their need for tranquility was a privilege. We’ve created a home they enjoy, and one that’s a perfect entertainment environment and in the process, built a beautiful friendship.”