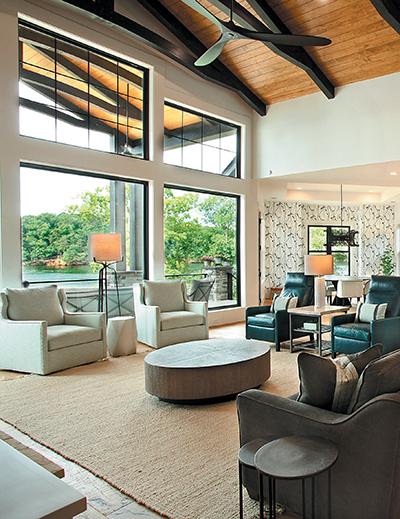 Steve and Peggy Norman aren’t planning to give up their Naples, Florida winter house, or their family home in Parkersburg, West Virginia. In the spring and fall however, when Lake Murray is at its most inviting, they’ll be vacationing and enjoying their new home on the lake.

Their newest place to perch is this beauty, artfully crafted by Eric Degn and Occidental Construction. After spending time in the area visiting Peggy’s close friend, JoAnn, who’d left West Virginia to be close to her family, Peggy and Steve fell in love with the lake and the “friendliest people we’ve ever met.” It’s an easy drive from Parkersburg, so children and grandchildren can frequently visit. And they want to visit, with the fishing, golf, boating and wave runners, along with plenty of play room for the family dogs.

“We made several trips here but couldn’t find the house we wanted, and so we decided to build,” Peggy shared. Her friend, JoAnn, along with JoAnn’s son, Steve, helped her get the project rolling and kept an eye on the progress.

Long distance building can be a challenge, but JoAnn and Steve had both used Occidental Construction for their own homes and were very happy with the results, so working with Eric again was an easy decision. Designer Crystal Galloway understood Peggy’s wish list and was able to take advantage of the plan’s open concept, plenty of bedrooms, and room for grandchildren. Her design provides a light and bright environment with a bit of West Virginia thrown in, and livability for the Normans and their three big dogs, Titan, Samson, and Cooper.

“We wanted a stone fireplace, wooden beams and high ceilings, as well as wood flooring that stood up to our dogs” Peggy said. “And since the views sold us on this particular property, there had to be lots of windows, porches and access to the water.”

The couple’s two children run the day-to-day operations of Smoker Friendly, the family business with stores in West Virginia, Ohio, and Maryland. “Steve keeps in touch by phone and computer,” she said.

And, building during a pandemic was much easier with the help of Eric, Crystal, and their friends. With two other houses, moving furniture wasn’t an option, so everything was new, chosen specifically for this house. “We’d never built a house before, always buying and renovating, so it was a very different experience, but we drew from what we’d seen, liked and lived in and received great advice from the experts,” Peggy said, adding that it was lots of fun to start fresh, with a clean slate.

The results are cohesive, with fun touches amidst the appealing sightlines.

It begins at the end of the driveway, where a custom-designed mailbox sets the tone. Odds are you won’t see another one like it. The stone driveway welcomes you to the entry and into the foyer. Just inside, the stairs descend to the lake level and the plans were adjusted by Eric to make that descent more aesthetically pleasing. First, the couple’s primary living area beckons.

You can see the lake from the front door, but in between there’s much to behold. To the right is a compact office, where on the day of my visit, Steve and the pups were enjoying golf and snacks. The paint color is ‘Passive.’ Most of the rest of the house is painted ‘Snowbound’ and the black doors and bar cabinets are ‘Tricorn’ black – all by Sherwin Williams.

Just beyond is the foyer bathroom, with its modern sink placed on a large piece of floating wood. Rustic and elegant, simultaneously. The foyer features a Chris McDaniel painting of Steve and Peggy’s grandchildren and dogs. It’s the first piece Peggy would save in an emergency

The area opens seamlessly into the great room with its large stone fireplace and wood mantel. Look closely and there’s a small fossil shell embedded in the rock. Peggy loves it!

The great room is their favorite room in the house and it’s a showstopper! Floor to ceiling windows reveal those spectacular views and the upstairs porch with its dark beams and comfortable furniture. They often spend evenings out there watching the lake with all its activity. Look up and you’ll find the same timbered beams supporting a high wooden ceiling. Below, an area rug defines the seating space over expansive wooden floors designed for easy maintenance, especially with three large dogs scampering about.

To the right is the kitchen area with quartzite countertops (white Macaubus on the island, and leathered absolute black around the perimeter). Behind the kitchen and away from the lake is the laundry room and guest suite. 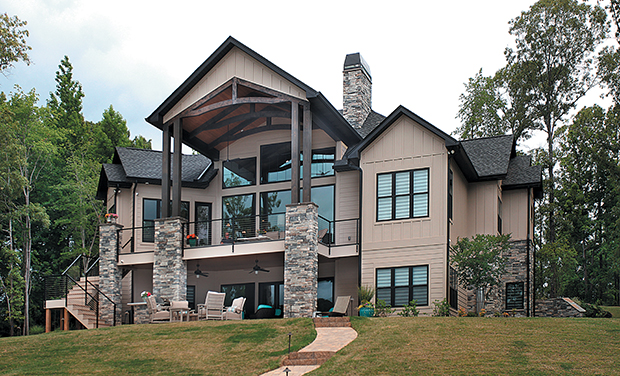 The kitchen nook features whimsical lighting (Peggy says it looks like an ostrich hat) and a fun wallpaper design that helps define the space. The kitchen table, chairs and lighting were purchased from Saleeby Jean Interiors, designer Chrystal’s business, along with much of the other lighting throughout the home.

To the left of the great room and opposite the kitchen is the master bedroom with its closets and bath.  The coffered ceiling there is another Norman family favorite. An exterior door provides easy access to the upstairs porch. The bathroom features custom tilework along with a large soaker tub with a chandelier overhead. “It’s something I knew I wanted, and I love the way it turned out,” Peggy said.  Steve wanted a rain shower head in their expansive shower, so both of them got exactly what they wanted.

Downstairs are three bedrooms and two bathrooms, each decorated beautifully for visiting family. Their son and daughter have picked out their favorites. “My son and daughter wanted the rooms facing the lake,” she said. The third downstairs room has two double beds, perfect for the grandkids.

A large, unfinished room on the lower level is already being used for storage. Another great room and kitchen area are perfect for family and a large open space is awaiting the arrival of a shuffleboard table.  The two downstairs bathrooms and the downstairs great room share the same tile. The doors open to lake level covered porch with amazing stacked stone columns. Just beyond, there’s a fire pit and walkway down to the dock. A pontoon boat bought and shipped from Florida to Captain’s Choice was taken care of by Chance Taylor, general manager, and was waiting for them before the house was finished. Two wave runners are poised for fun.

Facing the back of the home, you can see the black gutters – which turn a utilitarian feature into a design element. The view is stunning, and Peggy says that boaters often stop and enjoy the view of their home.

Finally, because they know about deer from their West Virginia home (they feed a small herd every night when they are there), deer resistant plants were a necessity. “Clean Air Lawn Care has done a great job for us,” Peggy said. “We like that they use electric solar-powered equipment and organic, pet and kid safe fertilization programs.”

There’s a lot to love about the whole package and the dog water bowls found throughout show that the pups can always get a cool drink while playing and enjoying their own time on the lake.