In one of the most heavily flood-damaged areas in Columbia, this family has rebuilt and continues working to assist other flood victims. 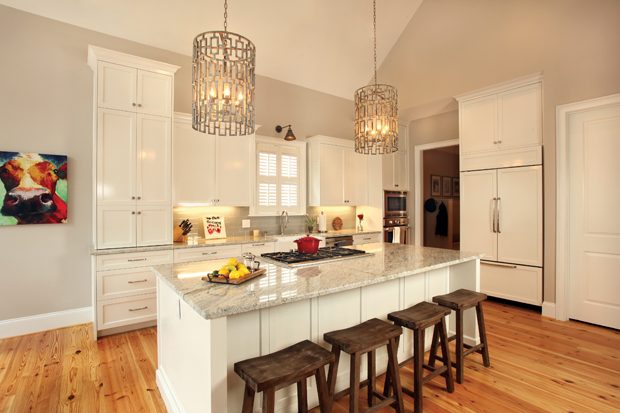 Hope. Without it, life is hard journey. When the thousand-year flood ravaged central South Carolina in October 2015, people from all walks of life lost homes, personal belongings, vehicles, and tangible mementos that can never be recovered. What sets apart this group is the reaction to the terrible aftermath: a community-wide feeling of hope, evidenced by neighbor helping neighbor.

Jones Andrews is a flood survivor. The home he enjoyed with his children near Lake Katherine in downtown Columbia was heavily damaged and ultimately demolished.

“I feel fortunate that the Lake Katherine dam didn’t break. I was here with my twins and a friend of mine on Burwell was worried about the creek rising from all the rain and my son was staying over there,” Jones begins. “We spoke at midnight and at four thirty in the morning, I got a call from him saying he had four feet of water in his house. He was bringing my son Will and told me to get a couple of valuables and get out.”

It was still dark, so he couldn’t see what was going on through all of the rain. “My daughter had her bag packed and my son had his backpack. I grabbed my toiletries and we left with the clothes on our back,” Jones said. “Trying to get out of danger was tough and we almost didn’t get out. First, we tried to go towards Gills Creek. Then, we turned around and went towards Brennan. I was trying to get the children to their mother on Shady Lane, but I had no idea what was really happening.”

The water was already flowing across Trenholm Road, but Jones and his children went through the raging river in his pickup truck. He went to Susanne Smith’s house, his significant other, for refuge. “Eventually, we got the children with their mother when everything settled down,” he said. Jones stayed on Susanne’s couch for a week, moving next to an apartment for a month and then to a condominium off Veterans Road. “Everything I had was something that had been given to me,” he explained.

Later in the afternoon of the flooding, Jones went to check on his house. “I came back and found a river instead of a street. I walked through the water, up to waist high, just to look at the house. All my furniture was floating,” he said.

Susanne recalls the horror, as well. “It was all floating at one end of the house. The refrigerator was flipped over, floating. It was just nasty,” she said.

The smell of raw sewage was overpowering. There was so much water that his children could catch fish in the back yard. Jones and Susanne took as many photos as possible to help with the impending insurance claim. “The insurance company was calling to ask, ‘where is the stuff we can look at?’ and I had to tell them everything was in the trash heap,” Jones said, when discussing the challenges of filing a claim.

As one of the lucky homeowners in that area to have flood insurance, his policy was at the federal limits of coverage. Even so, he wasn’t able to recover the full amount of his coverage. “They said my house didn’t need to be torn down and could’ve been fixed,” Jones said. “Insurance paid a portion of the structure’s coverage and gave me a portion of the worth of the contents. They depreciate everything and you have to get appraisals on what you’ve lost. But, how do you do that when it doesn’t exist anymore?”

The struggle was time consuming and costly. “It was a lot of work. I had to inventory everything I lost and put a price tag next to it and it’s just not something you prepare for,” he continued. “You have a natural disaster, people are struggling and nobody’s asking to be made rich, we just want to be made whole again.”

“We had a big red construction dumpster and had all kinds of people over here, helping us,” Susanne added. “It was amazing. The way the community came together, I’ve never witnessed anything like it. People were everywhere helping, in yards taking pictures out of frames, laying out clothes and shoes to dry. Random people were just bringing food and gloves and all kinds of supplies.”

An attorney by trade, Jones is actively working to help others in his neighborhood find help. “I’d like people to know there are many people out there still hurting,” he said. “So many still need help. FEMA hasn’t offered what’s needed, so I’m working with my firm to help folks who need an advocate. We’re going up against Fort Jackson for the dam breakage there, which should’ve never happened. That break put over two hundred million gallons of water into Gills Creek, which is why we had the quick rise.”

For several months, Jones and Susanne were busy working on the plan for the new house. Along with the physical structure, they’d have to replace all of the furnishings and over eighty percent of his clothing. “We got started early in the process and made the decision we weren’t going to live in a house that had five or six feet of water in it,” he said. “We had an engineer look at things, and the footings and piers had moved. The foundation was shaken. Along with all of that water, you’re going to have mold issues down the road. The decision was to tear it down and start over.”

Craig Hensley became their builder. “We chose him because he could get it done in four or five months. That’s a really short turn. We started at the end of May and we were done in October,” Jones explained. Susanne noted that other homes on their street are much farther behind in the construction phase.

Susanne worked with the architect more than Jones did, but his input was vital. They created an open plan with ten-foot ceilings downstairs and nine-foot ceilings in the upstairs rooms. The doors are tall and you feel an enormity of space in a fairly compact house.

The differences in this new home and the one that once stood on this lot are stark. It was a 1954 ranch style with virtually no storage and tiny closets, but it had been upgraded and renovated. Yet, it remained a basic plan from that era, with three small bedrooms. “This house is like night and day from the last one,” Jones said.

The master bedroom is a restful space with a cool hue and Heart of Pine floors. “We wanted a bigger room and originally planned to do bookshelves, but chose to cut back,” Susanne mentioned. Heavy molding is a nice detail, found throughout the home. This room is painted in the color Sea Salt from Sherwin Williams. It’s soft, relaxing and has a Southern Charlestonian feel.  “It’s my favorite color,” she said.

His and hers closets round out the space in the master bath area. A double sized shower and soaking tub highlighted by a chandelier give you a modern, elegant vibe. “If you’re here taking a bath and dim the lights, it’s pretty relaxing,” Jones said.

The bedrooms for the twins are coordinated to their pre-teen tastes. Beautiful sparkly granite countertops make the girl’s bath feel very feminine and Will’s bathroom has a great curvature in the countertop. The shower has an accent in the back with a blue and grey tile detail.

The furniture throughout the home was chosen by Bridget Kneece at MACK.Home and the architectural details were selected by Susanne and Jones. There’s a great open area upstairs that can be used as a homework cubby and can evolve as the family’s needs change.

A collection of family photos were salvaged and will be placed once they’re restored.

The room over the garage is a great place for the kids to hang out and is furnished as a television-focused space for entertaining. A second set of stairs comes off the back side and ends up at the mud room area where there’s a purposed drop zone for backpacks and anything that needs a place to be collected and not cluttered.

The powder room has Susanne’s favorite vessel sink that has a rustic feeling. The half bath is larger than the usual size layout given in spec homes, so you don’t feel crowded.

A light fixture is hanging just outside the powder room that survived the flood. It wasn’t hanging in the old house, but was found floating in the dining room. It had been on the floor and was waiting to be installed. We used it and it looks fantastic, and it wasn’t meant to be in a mudroom, but it works.

An atypical laundry room, it’s lit by a chandelier. Bridgett thought it was needed here and gives you a neat space to do fluff and fold under the bright lights.

In the kitchen area, there is a leathered granite finish that Jones selected and simply loves. It’s anchoring a bar with a smoked reflective tile backsplash.

The main kitchen is replete with high end granite finishes and an icemaker that gives you the crunchy ice so many people love. There’s not a formal dining room, as the family didn’t want to have a wasted space and decided to instead make the kitchen into an eat-in area. The pantry is huge, with a totally unique light fixture with wooden spindles. The builder’s wife found this fixture and, along with the builder and his spouse, there were a number of professional people who helped bring this house to fruition in just a few short months.

“This is my favorite part of the house, right here,” Jones said as he showed off the rear porch. He has a Coyote Grill and a wood-burning fireplace with a gas lighter. “I can sit out here and watch ballgames,” he said.  “My dad played baseball at Carolina in the 1940s, my older brother played three years of Carolina football and I played from 1984-1987, so we’re big Carolina fans,” he said.

“We were able to save his jersey from his Carolina Football career. It was in a nice frame, but we’re having it cleaned and redone,” Susanne said. “It was the 1987 Gator Bowl jersey that he wore in the game. His mother’s Bible survived and the prayer from his mom’s kitchen both made it through the flood. They were all blessed.”

They also didn’t have a pool previously. Jack Oliver created the new pool and deck area, making a 16 x 32 water feature. A cute shed was constructed around the pool equipment so it wouldn’t be an eyesore.  The family has plans to add additional landscaping as they go forward.

The couple had a party to celebrate surviving the flood with close to sixty people. They’re still adding personal touches here and there, but this house now truly looks like their home. “After the flood, I realized that life is fleeting,” Jones said. “It might be a lot to bite off, but I’m going to do it. I always find a way to make things work and life’s going by quickly so I wanted to build this home and continue to be part of this community.”

Jack Oliver Pool, Spa and Patio: created the pool, which was a new feature.

Casual Living: donated pool accessories and furniture for this feature.