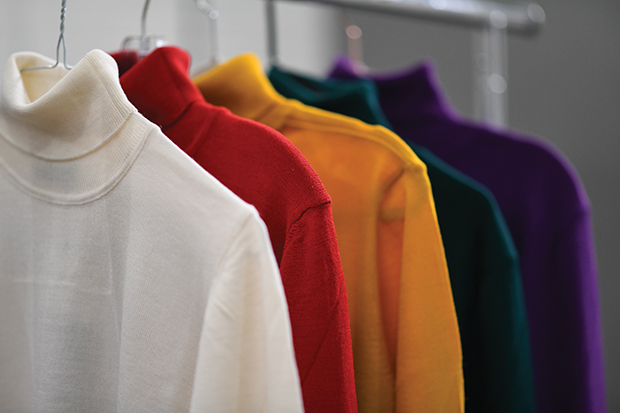 The other day, I found myself searching for a turtleneck dickie on the internet. A dickie, for those of you who are too young to know, is a collar, for when you want the look of a shirt under another item of clothing, but you don’t want to wear a whole shirt. For example, you have a cashmere turtleneck dress you love because, to quote the late, great Nora Ephron, you feel bad about your neck, but you also hate it a little because it makes your neck itchy. Ironically, in your effort to cover your neck, you end up with an angry rash from the knitwear. The solution, obviously, is a cotton turtleneck dickey.

When summer rolls around, exposing your neck, which you still feel bad about, you explore solutions, like a chemical peel, which makes your neck red and flaky before it looks better. At this point, you may be thinking of the classic childhood book, “If You Give a Mouse a Cookie,” in which a demanding little mouse finds that every time he gets what he wants, he needs something else to go with it. But back to the dickey.

Now that your neck is red and rashy again, you need to protect it from the sun, which will definitely make things worse. Chemical peels are expensive, so protecting the results is key. You pull out the basket of scarves, a treasure trove of brightly colored silk and cotton you inherited from your mother and grandmother, who probably felt bad about their necks. Tying the scarves jauntily around your neck makes you feel chic and vaguely French. They feel smooth against your rashy, crepey neck and hide a multitude of sins. But who wears a scarf while playing golf or taking a power walk? If it’s wrapped well enough to cover your neck, it will slip and bunch, which makes you want to abandon exercise altogether, which is far too easy for those of us who hate exercise.

Why wear a scarf when you can pop one of those all-cotton turtleneck dickies under your golf polo? Problem solved. The dickie provides cover, doesn’t slip, and is cooler than a scarf. And by cooler, I’m definitely referring to temperature, not fashion cred. Because who needs fashion cred when you feel happy and comfortable while protecting your neck?

Aging is different for everyone, but as they say (or print on a tea towel or needlepoint onto a throw pillow), it’s better than the alternative! (Yes, in my old age, I’ve not only embraced the turtleneck dickey but the needlepoint pithy comment. Also, words like “pithy.”) Although I’m not above putting in a little effort (see previous reference to chemical peels), I’m old enough to prioritize having fun over looking perfect. There’s only so much one can do about a waggly neck, and I refuse to give up golf, so turtleneck dickey it is.

I often joke that when I had the body to be an exotic dancer, I was too timid and full of self-loathing to take advantage of it. After three children and multiple hospital stays, enough people have seen me in various stages of nudity that I just don’t care. Is there a market for a middle-aged mother of three with droopy bits and a well-worn c-section scar on the gentleman’s club circuit? Probably, because if the internet has taught us anything, it’s that everyone is a little weird. Did I threaten to start a webcam business catering to men with a cranky mommy complex during the pandemic when I was afraid my fully clothed freelance writing business would suffer? Yes. Did I mean it? Probably not, but my kids haven’t been asking for much in the way of material goods, likely from sheer terror that I would do it.

I’m rarely asked my age because people know it’s rude to ask when the person may not want to answer. When my age does come up, the response is often, “Oh! But you don’t look that age!” But I look about like everyone else my age. And I also think I’m pretty enough, and I also don’t really care. No one’s paying me to look good, so it’s no one’s business but my own how I age. Look at me or don’t. It’s your choice.

And you better believe that if I do start that webcam account? I’ll take everything off but the turtleneck dickey, which I’ll sport proudly as I do the electric slide around my messy closet for all my fans. Because there has to be a market for that, right?