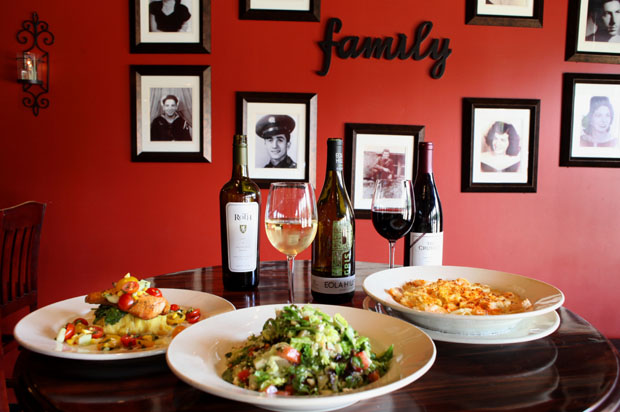 The comfortable community around Lake Murray does not appear to have much in common with the immigration hub of Ellis Island near New York City.

The port that welcomed thousands of new Americans is where Alodia Santoni Contasti first arrived in this country from Italy. That was three generations ago, and she could not have imagined that her descendants would one day open a restaurant that bears her name – near Columbia, South Carolina, no less.

Tucked away behind an unassuming storefront facade that conceals a world of flavors within,

Alodia’s Cucina Italiana is a haven of authentic cuisine. It’s the vision of Adam Huneau, who with his wife Betsy opened the restaurant in March of 2008 as a tribute to his great-grandmother.

Since that time, countless customers have made their devotion for Alodia’s – pronounced “Allo-DEE-ahs” – known. Many share their opinions by word of mouth and hundreds have posted online reviews. “Bliss,” one diner proclaimed. “Cozy, romantic and delicious,” another stated. “My family has been coming for years and every meal is a delight,” said another. And those accolades aren’t unusual: The restaurant has risen to the #1 spot out of 827 Columbia dining establishments reviewed on Trip Advisor’s popular website.

Such rave reviews are the result of impeccable service combined with memorable cuisine that encompasses both classic and contemporary Italian dishes.

Bowtie Gratinata brings together pasta, sautéed shrimp and pancetta, then tops them with a creamy Parmesan sauce baked until bubbly and golden. It’s indulgent and satisfying.

General manager Jordan Hennessee started as a server and worked her way up. She enjoys researching and offering advice to diners eager to explore the world of wine pairings. Some of her favorites include Eola Hills Pinot Gris with the Sicilian Chop Salad, and Roth Estate Sauvignon Blanc with the Roasted Atlantic Salmon. Suggesting the Crusher Pinot Noir to accompany the Bowtie Gratinata may be bending the “white wine with seafood” rule, but the combination of flavors works. Alodia’s offers a full menu of cocktails that includes a selection of fashionable martinis, “but wine is more popular,” said Hennessee. Even better for oenophiles, every bottle is discounted by $8 on “Wine Down Wednesdays.”

With a core menu of traditional Italian appetizers, pastas, panini, meats and seafood, Alodia’s isn’t timid about introducing new dishes from time to time. Some of these draw their influences from distinctive regions, such as Northern Italy and Sicily. “We started with all family recipes,” Huneau said, then explained, “we empower the guys in the kitchen to develop items.” Chef Lance Hayes, who trained at the restaurant, is now part of the team doing just that: Duck Penne Gorgonzola and Lobster Ravioli with Tarragon Tomato Cream are quickly becoming menu favorites. But the family flair is always there – Adam’s mom Nanette makes the red sauce, with occasional help from Adam’s father, Daniel. (Adam’s wife, Betsy, spends less time at the restaurant than in the past. She’s focusing on raising kids these days.)

And speaking of kids, children’s menu items are available during the restaurant’s serving hours for lunch, dinner, and Sunday brunch. “We’ve been ‘family-based’ from Day One,” Huneau emphasized.

Alodia’s dining room is welcoming and relaxed with pleasant music. Evenings are reminiscent of a Sinatra-era cocktail lounge. The space with deep red walls is cozy but not cramped; it seats 78 and the bar area can accommodate about a dozen more. A semi-open floor plan allows diners a glimpse into the activity taking place in the bustling kitchen.

Strictly speaking, Alodia’s is a “white tablecloth” restaurant, but the ambiance is friendly instead of formal. Reservations are not accepted (except for selected holidays), but guests can place their names on a waiting list by calling 30 minutes before arrival.

Admittedly, large groups would likely be happiest with Alodia’s catering: Half to whole trays of menu favorites such as Chicken Marsala, Stuffed Baby Portabellas, and Baked Ziti will serve from 10 to 25 hungry people.

Always thinking of ways to make the Alodia’s experience unique, Huneau recently commissioned a line of custom-blended cigars that customers can purchase to enjoy at home after their meal. When he submitted the premium smokes to Cigar Aficionado magazine, the esteemed experts there responded with accolades by way of ratings that reached 90 and 94 for two stand-outs.

Repeat customers will find that staff remember their names and greet them warmly, and such hospitality helps set Alodia’s apart from other restaurants. Its popularity means that sometimes there’s a bit of a wait to be seated. Occasionally a patron will ask Huneau about expanding or opening another location, but he hasn’t any plans to do so.

So here’s a suggestion for guests who come to dine on busy nights: While waiting for a table, take a few minutes to look at the wall of vintage portraits. In the center, in large letters, is the word “family.” Around it, photos depict family members cooking, eating, and celebrating through the generations. And think about this: Like the aromas and flavors of good food, they are reminders of the ways in which we’re all connected, no matter how we found our way to the places we now call home.