Girls Night Out brought extraordinary talent to the capital city. 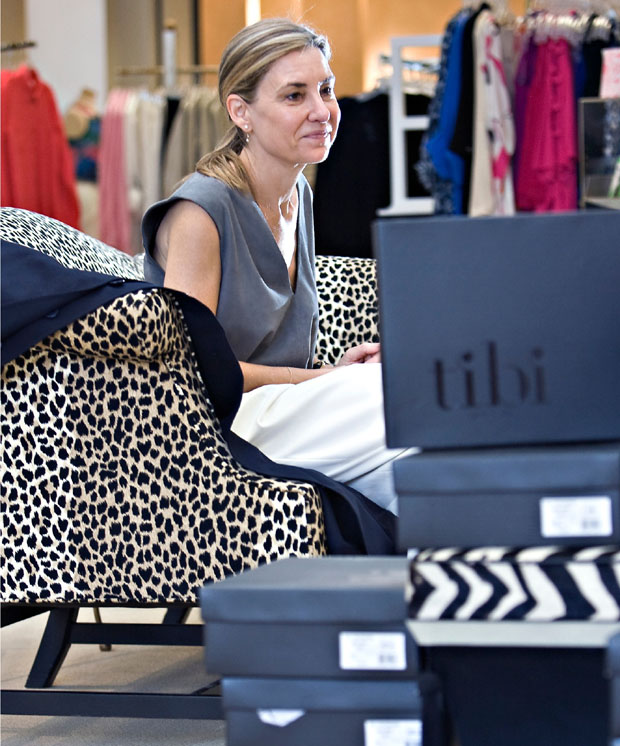 Back in January, Bruce Greenberg of Coplon's mentioned that Edventure's annual Girls Night Out in April would be featuring designs by Tibi and that the owner and Founder, Amy Smilovic would be coming in for the show. I shared my excitement with him as I reflected on attending the Tibi show last September showcasing her Spring/Summer 2015 collection during NYFW, which was the same collection to be shown here. I was excited to finally meet the woman behind the brand and my mind raced as I imagined what Amy would be like.

Tibi has mastered the art of modern dressing, with looks that are laidback and easy, but chic and modern. The Tibi woman isn't fussy; in fact, she's a minimalist but a force to be reckoned with. When I was asked if I wanted to interview Amy I was delighted.

Prior to the fashion show and interview I had the privilege of having dinner with Amy, her delightful assistant and a few other guests. Amy walked into Terra and introduced herself and all I can say is that Amy WAS Tibi. Amy was the modern woman; powerful, refined, intelligent and did I mention gorgeous? Over dinner, we talked about everything from fashion to family and travel to trailblazers and I couldn't wait to sit down with her and have her share her story with me.

Lisa: I understand you are a Southern girl at heart?

Amy: Yes, I grew up on St. Simons Island, Georgia and graduated from the University of Georgia.

Lisa: Did you always know that you wanted to be a fashion designer?

Amy: Actually no, I never really thought about fashion design as a career. I have always loved art but my goal was to have my own business. I guess that you could say that Tibi just happened organically. My husband Frank and I were both working for American Express and he was transferred to Hong Kong in 1997. While in Hong Kong I met a woman that Frank had attended college with and she and I hit it off. One day while out and about we were admiring the beautiful fabrics we saw and it inspired us to start our own line of clothing.

Imagine two women in there twenties traveling to Indonesia. We went to the consulate and met with another young woman there who was wearing a full burka but had the foresight to show us around and we were in awe of the beautiful fabrics that we saw. We purchased fabric and returned to Hong Kong and just dove in and started designing.

Lisa: I understand your first collection was small and only sold overseas?

Amy: Yes, it offered four different dress styles and sold out quickly. We took the $9,000 in profits and reinvested it in the company. We started Tibi with a clear identity of who the "Tibi" woman was and stuck to that as we continued to design new collections. Then we got phone calls from Saks Fifth Avenue and Neiman Marcus and the line took off quickly.

Lisa: When did you move back to the United States?

Amy: We left Asia in 2000 when I was pregnant with my first child and relocated to a loft in SoHo in New York City. My business partner at the time realized that she no longer wanted to be in the fashion design business and we split amicably.   My husband Frank left American Express and joined me in the business as President, a position that he still currently holds. We opened our first retail store in 2006, which is also located in SoHo. We still run Tibi out of SoHo but currently live in Greenwich, Connecticut with our two sons who are now 11 and 14.

Lisa: Tell me what inspires your designs?

Amy: My designs are heavily influenced by international travel and the beauty found in nature. My designs have an organic feel and a lot of fluidity to them. I would also say that my designs and personal style are a confluence of different things; I was born in the Midwest, raised in the South, married a European man and lived in Hong Kong.

Lisa: You also design your own collection of shoes now?

Amy: Yes, I started designing shoes three years ago. I always had a hard time finding the perfect shoes to go with my designs so I started designing the shoes that I envisioned wearing with the collection. It's amazing that shoes can dictate clothing when a woman is choosing what to wear.

Amy: Well from 7:20 until 8:30 I'm just like every other just mom, cooking breakfast, packing lunches and dropping the kids off at school. Then I head to the office where I have to look hip enough to command the respect of the 25 year olds who work on my team. I love being surrounded by creative people. After work I'm back home cooking dinner and helping with homework. I understand the many roles that a typical woman has during the average day and that’s who I design for.

Lisa: What are your favorite vacation destinations?

Amy: I guess I would have to say Capri, Prague, Bali and of course, Sea Island, Georgia. We travel to St. Simons twice a year with the children to visit family and play golf and tennis.

Lisa: Every woman should own?

Amy: Every woman should own a tailored blazer. I would choose a black tuxedo jacket over a wrap. It's more modern and chic.

Lisa: What is your career advice for anyone wanting to get into the fashion industry?

Amy: Just do it. Don't listen to anyone who tells you anything negative.   People say that the fashion industry is tough but the truth is every industry is hard; nothing worth having in life is easy.

It's no wonder that Drew Barrymore, Julianne Moore and Reese Witherspoon are all big fans of the brand. The woman who wears Tibi balances the juxtaposition of masculinity and feminity however; the scale is always tipped in her favor. After meeting Amy I understand why.

Tibi is now one of the largest contemporary lines and can be found in over 600 specialty and retail stores including Coplon's, Saks Fifth Avenue, Neiman Marcus, Bloomingdales and many online luxury stores including Net a Porter.