What Andy White sees, partially obscured in a junk pile, suggests a vital element for a work of art coming into sharp focus in his imagination. 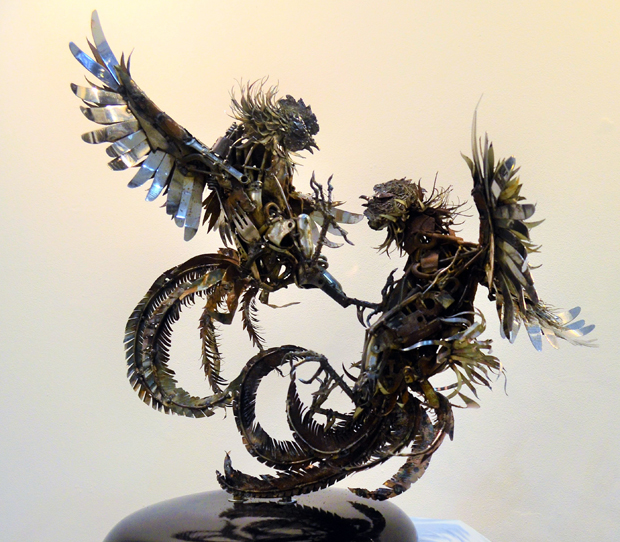 Far more than a trash to treasure man, White is a visionary artist who recognizes a higher and better use for a rusted-out chunk of metal than what its utilitarian genes predestined it for. His findings are diamonds in the rough, and with heat and pressure he mines them, gives them a fascinating rebirth.

When White and his family put down roots in Columbia, he was able to become more serious about the sculpture he had messed around with since his undergraduate years. Finally, he had half a garage to use as a workshop.

Creations welded together from rusted out frying pans, blades of electric fans, colanders, deck chairs, car fenders and motorcycle gas tanks, iron-tined rakes and verdisgris-tipped shovels spill out onto the driveway and onto the back lawn.

When finished, they take their places in this ad hoc sculpture garden behind his Hollywood Hills home, not far from the University of South Carolina where, as research assistant professor, he teaches archaeology in the classroom and the field.

Whether on an archaeological dig, as the one he currently is leading in Fairfield County, or when working with his metal sculpture, White says human-made debris is his stock and trade.

And after an intense day of digging up the past, his work on metal sculptures allows him to do something else with his brain – create a new future from some deserving junk. “It’s visceral. It’s sweaty and dirty… you get scraped, cut, and burned. It’s very real. There is something about wrestling with it that is very satisfying – getting to see something come to life. A whole emerging out of all these pieces.”

Until word of his art began leaking out, and it has gushed out once he exhibited this spring and summer at Tapp’s Arts Center, he kept his larder of metal supplies well stocked by training a keen eye on the neighborhood curbs as he walked the family dog, Salpy.

Once people began seeing the sculptures, and seeing what kinds of metal might have an afterlife as sculpture, donations began trickling in, to the point White has had to start turning things down. And he has yet to visit a scrap yard.

“Large pieces, like a metal Futon frame, I just don’t have space to store until I can use it. But I am flat out of bicycle chain, so that would be a yes.”

Recently, White’s supply side benefitted greatly when Montessori School of Columbia, which his children attend, offered him the opportunity to cart off all the metal he wanted from a house and garage that were going to be leveled to make way for construction of new school facilities off Rosewood Drive. His appreciation will come in the form of a piece of sculpture for the school’s garden.

“It appears that the person who lived there never threw anything away; maybe he always intended to fix the broken things. I understand that,” White said on his first afternoon of excavating in the garage. As he foraged, he filled plastic tubs with gears that once had run something; an old radio – its tubes still intact; broken tools, time-keeping implements and other quizzical things whose histories had been silenced by time.

Already he had carefully loaded into the back of the family SUV remains of two floor lamps weighted with Art Deco cast iron bases. The moment his practiced eye discovered a new piece of junk, the object took on a persona. “I like things that look like they had a life, like they have been somewhere,” he explained. “It is satisfying to transform something that was headed to the junk yard.”

You’d have to say White’s sculptures are representative because art patrons immediately know what creature they’re looking at. “Humans are good at recognizing cues, so if I can get in enough cues that enable viewers to recognize what inspired the piece, if I nail it at that point, then I can get a pass on the rest of it. So I challenge myself to figure out: Where is the line? I try to execute the piece as closely as possible to what I see in my head, but it ends up being what it is.”

White may see the vision as a nearly finished piece, in one sweeping revelation, or one of the elements waiting for him on a neighbor’s trash pile may lead to something new. As did a jettisoned piece of mechanical debris spotted on a summer stroll.

“If I can’t fit it onto my pockets, I usually have to let it go. Occasionally, I’ve gone home and come back with the car. When my wife Liz texted me a picture of this thing she’d discovered on her walk, I didn’t know what it was, but I had to go get it. It turned out to be an automatic coal stoker some someone’s old coal furnace.” It immediately became one of his treasures. It will become part of something, someday.

“I like mixing the natural and the mechanical. And I’m fascinated by animals that compete and display to attract one another. It’s sex when you get right down to it. Animals are fierce about their chance to pass along their genes,” White said.

One sculpture he produced that depicts such fierceness had, as elements, two combative birds. “I thought fighting roosters might go over well here in Columbia,” White said. The piece sold earlier this year on opening night of his inaugural solo exhibition, entitled “Afterburner,” at Tapp’s Arts Center.

As an anthropological archaeologist, White is quite attuned to the physiology - the muscle and bone - of living breathing creatures, in this case, animals. To date, the large, showier pieces he has created frequently have been dinosaurs. Their physiology affords breadth of interpretation and use of materials.

“I was always fascinated by dinosaurs, so I can’t remember a time when I didn’t know something about them. I don’t think it had anything to do with education – more likely a natural curiosity that my parents helped me satisfy. I’ve still got some of the library cast-off books I had when I was a kid. Those books were outdated even in the 1970s, but I went through them over and over again.”

White also sculpts birds, frequently perched on some pole that previously served to cast light over the shoulder of a reader, guide a lawnmower, or serve as handles for work tools.

Owls have been among patron favorites, in part because their modest scale makes them more suitable for residential collecting. A dragonfly, rabbit and snail are among the more pastoral subjects he’s sculpted. Some of the pieces that are for sale will be available at the yarn shop his wife, Liz, is opening: Luna Lola, 3000 Rosewood Drive.

As mentor for this artistic bent, he has had only Trial and Error. “I’ve had no one to teach me. But I’ve always made stuff,” said White, who grew up on an Ohio farm and is quick to recognize any tool left along his foraging route.

White’s pieces come together with what appears to be little manipulation. Each element is welded securely into place, but the sum looks like elements were placed almost haphazardly. Besides his welding torch, he uses a few simple hand tools to cut and shape his materials.

The sculptor’s reverence for nature guides him to leave well enough alone and let each piece speak for itself. After all, it’s been given a shot at a life it never knew before. “I attach memory to things,” he said.

His laissez-faire approach works for color and sheen as well. “I can burnish a piece just before I complete it, but sometimes the found objects came to me with interesting color on them. I jump at the chance to use those, just as they are.”

Because some of the sculptures include elements of family sentimentality – such as a bike one of his children rode – he is reticent to part with them.

But the animal sculptures are breeding quickly, and he wants to find good homes for them.