Artist Gerard Erley seeks to discover the poetry in a solitary tree…and to communicate that poetry in paint. 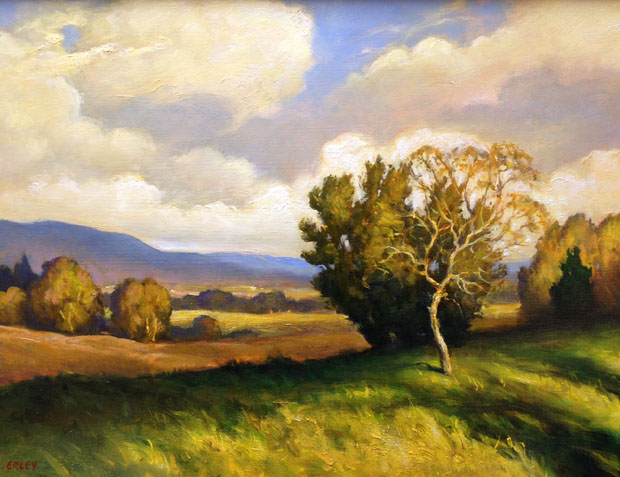 Arbor Day is a year ‘round observance for fine artist Gerard Erley. Not waiting for late April when Arbor Day is observed officially, Erley rushes the season – at his easel.

Erley’s ardent following is rooted largely in his romantic depictions of trees, romantic because he searches for the poetry in a solitary tree and communicates that poetry in paint. That the trees are imagined, not real, adds to the romantic quality of works. “The trees are from my memory and intuition,” Erley said. “In the studio I seldom refer to photos or sketches.”

Based on the number of paintings he’s made of trees, he easily qualifies as Columbia’s arboreal artist. His canvas is the ground into which a sapling is planted and from which it grows skyward. Paint is the hydration, and an assortment of brushes, some dating back to his collegiate years at Illinois State University, are metaphors for a shovel.

The resulting oil paintings hint at influences from such 19th century American and European painters as Inness, Corot, and Turner. These masters sought “a sublime quality of light,” as does Erley.“Although I don’t have it, I wish I did have northern light flooding into the studio. I paint at my best when the sun is shining. Since I don’t have natural north light, I rely on color correct fluorescent bulbs because they mimic natural light which helps with judging colors.”

Although most weeks he joins fellow About Face artists (associated with Columbia Museum of Art) to refine his observational skills by painting portraits and models (clothed and nude) from life, on most days he paints in his studio – which he considers his church.

There he strives to get at the openness of a piece. That’s what he wants for viewers. Erley said: “I feel the brush affords a more "open," less tight result than a pencil rendering would allow so I seldom sketch first; I go right to the brush to find the forms I will fully develop with color. The underpainting is worked transparently, allowing a warmth that remains, so it still has an effect in the final painting. I find this way of working especially effective when cooler colors are painted on top. This adds real life to the painting.”

He has learned, over years as an artist, how he works best. “To feel fully awake usually takes me a while, so I seldom get into the studio until around 10 am, although it’s not unusual for me to work into the wee hours. I try to reach an appropriate stopping point by a reasonable time because I’ve found that, as I tire, I too often mistrust my judgment.

Erley’s studio affords him the solitary confines conducive to painting. “While I do listen to NPR a good bit, I have found that too much bad news can be soul-deadening. On days when the news is bad, and many days even when it’s not, I turn on music. I like to listen to classic jazz – Billie Holiday, John Coltrane and Dave Brubeck. Rock favorites are Neal Young and Arcade Fire, and I love classical music, from Beethoven to Philip Glass. My all-time favorite musician is Joni Mitchell.”

The meaning of a piece comes across in how it’s made, Erley believes, so he prefers to suggest rather than describe in a precise manner. “What I wish for the viewer is an interaction with the painting. I feel if I describe things to the nth degree, viewers would be closed off from their own interpretation of the work.  I don't wish to dictate what the viewer must see.”

That’s why, to Erley, works of art are not complete until viewers do their part. “They complete it in their own minds in different ways.” Erley says varying perspectives alter how a work communicates to individuals. “When I have participated at outdoor art fairs, I usually set out a book and encouraged visitors to write down what the work is communicating to them.”

Although he looks forward to sending his work home with new owners, he doesn’t really like seeing his own work on display at home. “I mean, who wants to take his work home with him and stare at it during off-hours? I’d find it tiring to have my work in my line of sight that way because I would be looking at it, trying to figure out what could have been done better. If I was surrounded by my work in my home, I fear I could become entrapped in a past way of seeing things and that could make me unable to move forward.”

In fact, beyond his studio, the walls of Erley’s Northeast Columbia home are hung with paintings by others, works he has collected over the years. “My taste is very eclectic. What I collect touches me on some level. I don’t buy work to decorate but rather to reinforce some deeply-held beliefs about the power and purpose of art. Perhaps surprisingly, I find abstraction just as enjoyable, sometimes more so, than representational art. Often I find abstract pieces cut to the heart of the matter without the trappings of imagery.”

Although tree-studded landscapes have dominated his output, giving coherence to his body of work, he also has been recognized for his still life creations. Erley’s work has been juried into more than 200 juried shows, earning him countless awards, and also is in galleries and museums, corporate and private collections from New York to California.

He has taught basic drawing and art fundamentals at the University of South Carolina and often is invited to give workshops, such as one he did for the Crooked Creek Art League.

Locally, he is represented by City Art in The Vista, and Spartanburg’s Carolina Gallery now is showing his work. He has been urged to paint more portraits, and to give more workshops and private lessons. To see more of his art, go to GerardErley.com