. Philip Mullen is “a prolific artist with a special connection to the Koger Center” 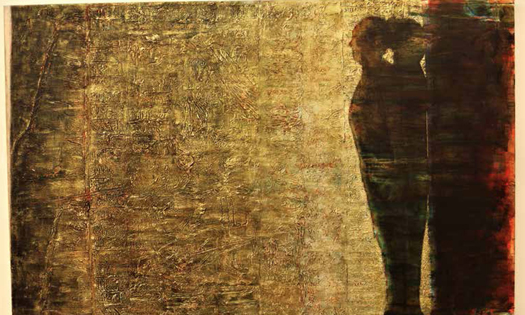 Thirty years ago, an exhibit of artist Philip Mullen's work was hung in the Koger Center for the Arts at USC where Mullen was a professor. Thought to be a temporary show at the time, the University proudly and subsequently acquired them, making them a permanent display as part of "The James C. Moore, Jr. Collection of the Work of Philip Mullen," showing how highly regarded they are.

Now, a recently developed app enables visitors to take an audio tour of the twenty works on display, all striking but varying in size from large to gigantic. Through the app, viewers hear Mullen himself describing each work and the techniques he used. There are also some charming personal anecdotes along the way. He tells how his daughters would enjoy finding combs on the street which he used to produce certain distinctive strokes in the paintings.

A new exhibit opening soon, “Mullen 2016-2019” will feature his recent works, providing insight into how his art has evolved over the years. Mullen will describe those changes in a personal presentation during the official opening on March 18 at 5:30 p.m at the Koger Center.

Koger Center Director Nate Terracio says Mullen’s work in the permanent collection inspired the creation of the new Upstairs Gallery that shows rotating exhibits on the center’s second floor. "It is only fitting that Philip's new work will have a temporary home in the Upstairs Gallery to create a retrospective of sorts throughout the building," he said. “We are thrilled to host these new works of such a prolific artist with a special connection to the Koger Center.”

In anticipation of the exhibit’s opening, Mullen extended an invitation to visit his studio, a fascinating opportunity to see where and how he works. “Big paintings are best made in a big studio,” he explains. His is 1,300 square feet with a spacious and expertly organized working space. Some 800 square feet with 12 feet high ceilings are completely walled with painted white plywood, so he can nail things anywhere. A storage area would be the envy of most commercial galleries. There is also a separate clean-up room with an elevated waist-high sink improvised from a mobile home bathtub, providing depth and width for Mullen’s expansive works, some of which are 15 feet wide. 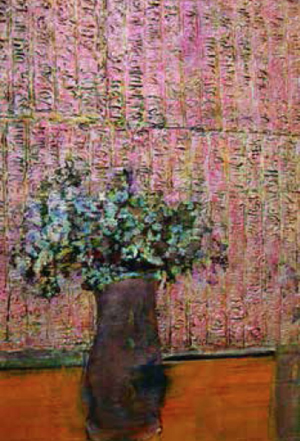 He tries not to finish a painting on any schedule, striving for complete satisfaction with each outcome. As a result, he frequently goes back and reworks paintings. For example, one boldly colored painting in the studio features deeply carved hieroglyphics, but its earlier rendition possessed subtle ochre hues. In an even earlier version of the same painting, it was a very bright splashy landscape.

In 1975 one of Mullen’s paintings, “Two Rains,” was included in New York City’s Whitney Biennial, considered the most prestigious invitational show in the USA at the time. With most of its works chosen primarily from major art cities, Mullen's work is the only one in the history of the show to be by an artist living in South Carolina.

Shortly thereafter, he leased most of Andy Warhol’s famed former “factory” studio where he worked for some time. In 1975 the prestigious David Findlay Galleries in New York began to show his paintings, mounting the first of his fourteen solo shows there in 1976. These exhibits often involved over forty paintings, most of which had a four or a six-foot dimension and even some larger works. Over the years the gallery developed an international market for his work. In the mid-1990s the largest clients for his work were in Brazil. Their acquisitions are as large as six by ten feet. His work was represented by Findlay until they closed in 2010.

Andy Reed, writing about Mullen’s works there described them as “Fluid, complex, abstract yet deeply rooted in the world of things experienced in a tactile way. … Carefully thought-out and joyously care-free.” Reed explained “Mullen’s art represents not an artistic simplification of visual reality, but a voluptuous re-imagining and re-working of it, which prevents a viewer from taking them in all at once - His paintings continually offer up new visual insights to note and luxuriate in.”

Mullen, now retired from USC and Distinguished Professor Emeritus, says his art is meant to be in transition, not to capture a frozen moment. “An artist should never be afraid to change a painting, although a number of good paintings may be ruined, a number of break-through paintings have a chance of being made. He maintains, “If an artist is not failing at times, they are not pushing themselves hard enough to try new things.”

Mullen says, “I strive to produce paintings that are so dynamic or changing that they can hold a viewer’s attention for years.” The works are meant to be in transition, not to capture a frozen moment. “Possibly a viewer might feel that if they look away, when they look back the painting will have changed,” he says. Admirers across the world, who have been thus absorbed, agree.