A tour of the Williams home is more than a simple walk through of the typical mid-century ranch. It’s a delight of the senses, with a total immersion in the world of custom and commissioned works of fine art. The cohesiveness of the interior design and the paintings is remarkable. 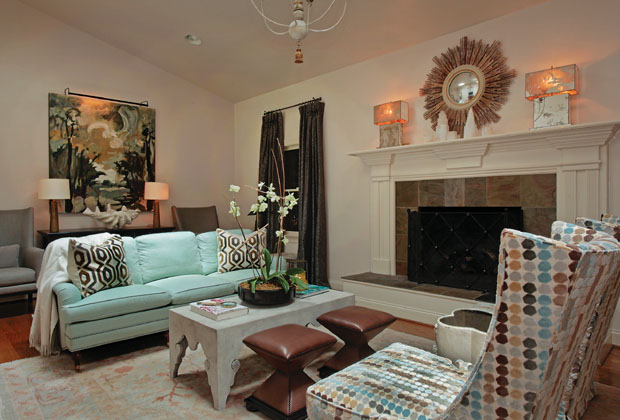 “The purpose of art is washing the dust of daily life off our souls.” Pablo Picasso.

“We started our art collection in 1999 and made it a point to collect local Midlands artists,” said Beth Williams, home owner. “We have works from eight local artists that we really enjoy.” The year after the collection began, Beth and her husband Jimmy moved to their current home. Its original condition was less than desirable. “It had never been touched, with all wood paneling, carpet, very closed-in spaces, and eight foot ceilings. My husband looked at me and said, ‘we are not buying this house.’”

Having the vision to see what the property could be, the Williams family took the leap, bought the house and hired a remodelor with the ability to make this old style home into a modern masterpiece. The same footprint was kept, entryways were widened, and the ceiling was vaulted in the den. A master bath and pool were added several years later.

The evolution of Beth and Jimmy’s home has been a labor of love over a number of years. Beyond the constructed physical changes, the soft work of interior design was led by Christy Edens from Verve. Beth’s relationship with Verve spans several years, yet only began working directly with Christy just over two years ago. “She came in and designed a home we envisioned and made it a reality,” said Beth. “She built off my ideas, brought her own and it was a perfect match. If I said I wanted something on that wall or something here, she really took my style from a more traditional look to something that has a modern component.”

The painting from artist Mike Williams is the inspiration for the entire room. “The feeling the painting evokes, with its colors, and by featuring it alone on the wall, gave us a center point for the design,” shared Christy. This artwork is hailed as the showpiece of the home, and was placed in the position of honor by the artist himself. The painting depicts a Southern swamp in a fairly abstract nature, which allows the observer to find many different things in the viewing.

All the furnishings are new to go with the painting. Beth selects pieces she likes, regardless of the period from which they’re associated. Christy’s sage advice on choosing new pieces: “Buy what you love, and you will always love it.”

Beth’s boldness extends to both pattern and color. “I love bold patterns and really love having something unexpected in the house. This den was problematic with furniture placement because it’s long and narrow. Christy had the brilliant idea to put the game table in the corner so the kids can play games there or eat a snack and be part of the family space,” said Beth.

The family spends time in the den frequently, either watch television, sitting by the fire or entertaining guests. At any given time, you may see a teenager lounging on the sofa. “We totally live in this space. I’m a Type A person, so I go around and clean the fluff all the time, but everything in here is useful and was chosen for its utility,” shared Beth. “The little tables hold drinks, everything is used. Even when we move into the living room, the family makes a point of sitting all over the house and enjoying the space.”

The natural light makes the den particularly striking. The original ceilings were eight foot, traditional height with the popcorn finish that was so common forty years ago. Now, the room is bathed in light with the skylights from the new vaulted roof line.

The contractor from the beginning of the many renovations planned by the Williams family has been Billy Reynolds. Christy and Beth applaud his work. “He bumped up the ceiling, added the skylights, which brought such an element of light, volume and space that the house didn’t have before. The house didn’t come with many great architectural features, so we’ve had to add those all along the way. Typically, mid-century houses didn’t have a lot of character and Billy was instrumental in creating those great elements,” explained Beth.

Scattered throughout the house are a variety of rugs, including Oushak Turkish rugs, natural weave grass floor coverings and hide rugs that ease the transition from one room to the next.

Next, The Outdoor Living Space

The porch was one of the distinctive features of the house that led the Williams family to commit to this home. A large, screened-in porch, it’s bathed in morning sun, yet doesn’t get hot. In 2007, a fireplace was added, allowing it to serve as a three-season outdoor room.

“Because we went out on that side of the house with the renovation, we chose to close in that part of the porch,” said Beth. “Jimmy and I sit out there every evening with a glass of wine. In the mornings, we have coffee there.” The functional draperies are made with Sunbrella fabric, giving it much more of a room effect than that of a simple porch. There’s a feeling of intimacy here, making it easy to see how it could employed in days beyond those of a typical summer.

Christy suggested four slip-covered chairs instead of a traditional grouping of a sofa and chairs. “There are four people in their family and this arrangement gives everyone their own space and it’s more conversational,” she said.

Keeping with the theme of featuring local artists, a huge painting on plywood provides another focal point for the outdoor room. The image was made just for that space, and represents their family and two dogs. This commissioned piece was created in just one weekend. “I didn’t want it on canvas because it wouldn’t weather well. It was for an outdoor space and once again, made a porch a room,” said Beth. “Even on our porch, we have artwork.”

Located to the right of the main entry is the formal living room. A smaller space, this room welcomes you with a small baby grand piano. The Stephen Chesley painting is here; clearly this room is all about the artwork. Even the antique English pine doors are artistic in form, if not function as they are decorative only.

Christy did a beautiful job of featuring the original bay window and making it important in the room. “Every year, we put our Christmas tree in the window and the draperies are just perfect. Every room I say is my favorite room, but this room is just a reflection of me. It really reflects my personality and it’s the room where I’m most comfortable. I just love it,” shared Beth. The art over the sofa is also a commissioned piece with an abstract representation of the members of their family.

Shall We Gather in The Dining Room?

While the dining room is small, it packs a big visual punch. The chandelier transformed the room from traditional to something that is chic, swanky and sophisticated. It’s not your mother’s dining room, with the long table and straight chairs. Instead, they chose a very non-traditional approach with a banquette and chairs around the table that can easily seat six. The mirrored screen is striking and adds to the romanticism of the space.

“The curved white leather banquette is unexpected for a dining room and just very appealing to my aesthetics. I don’t know that many people who would’ve put a banquette around their table,” said Beth. Art is important here, too, with a Steven Whetstone painting he created for this space. He is a former baseball player for the University of South Carolina and the Chicago White Sox.

It’s easy to see how guests love the dining room, as it delivers a “wow” moment. The chandelier is a beautiful centerpiece. A beaded glass light, it’s reminsecent of a Parisian upscale hotel. “It’s an art piece, in and of itself. The screen of mirrors was positioned to reflect that chandelier,” said Christy.

The custom silk draperies from Jim Thompson silk and the cinnamon velet pillows top off the design. “I appreciate my husband, who just allowed our imaginations to really take us to where we needed to be without cutting corners or being restricted. He trusted our vision and we both trusted Christy,” enthused Beth. “With her cute little personality, she blows in and then when she leaves, everything is better than when she came.”

Come in Through the Foyer

One of the showpieces of the home’s physical style is the front door, a custom design from Southern Custom Doors made of metal and glass. Beth and her husband Jimmy chose this style as a way to give a glimpse of what’s to come with the interior design. The wallpaper is very graphic with colors that are modern. The sconces were found in the showroom at Verve, and a Burts Cason lamp greets you as you enter the home. “The room evolved over time, starting with the wallpaper and an older mirror and then as things were added, it came to be what I really wanted as an entryway,” Beth said.

The Guest Room and Beyond

The guest room is a composition of neutrals with varying textiles and an upholstered headboard. Planned as a sanctuary for guests, this room incorporates a desk from their former home office. A beautiful Moroccan mirror, lamps chosen by Beth and Christy together and a collection of things they already had turned it into a retreat for their guests.

Sometimes you don’t need to add to make your design great, you may need to edit instead. “Christy brough such an artful eye and was right on so many things. She always told me not to worry,” said Beth.

“This home is a collection of Beth’s favorite things – art, beautiful objects and her family – and it just all came together,” said Christy.

“You know your design plan is working when your husband asks, “did Christy bring us anything today?” said Beth. “Rarely is a process like this fun but I was ready to embrace change. I appreciate everything. I appreciate beauty and I just love every room.”