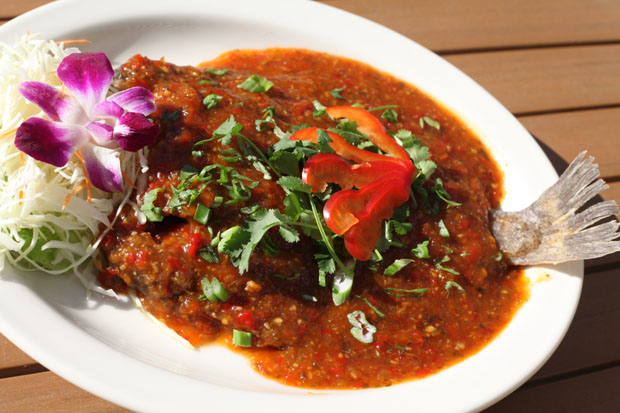 With food that’s colorful, fresh and flavorful, it’s no surprise that Thailand has become trendy during the last few years. And with the newest location of Basil Thai now open in Columbia, residents can easily visit the popular restaurant that once meant driving north to Charlotte or south to Charleston.

The restaurant was founded by Cambodian-born brothers Henry and Chai Eang, who arrived in the U.S. as children in 1979. Exposed to restaurant life by relatives back home who owned a traditional noodle shop, they were familiar with the demands and pace that running their own place would require. They opened the first Basil Thai in 2002 in Charleston, where the Post and Courier reviewer lauded them with high praise, calling the restaurant “Attractive, hip, and sophisticated.” A Mount Pleasant location followed, then Charlotte, and the Columbia eatery was the fourth to open in spring 2013.

To begin a meal, appetizers are abundant. Fresh basil rolls are a light first course of noodles, shrimp, and greens in a rice paper wrapper; dip them in the house sauce for a bit of spicy soy flavor. Satay chicken or beef grilled on skewers are complemented by peanut sauce. Fried wontons are a Basil Thai specialty. With meat and cream cheese, they are puffier than their Chinese counterparts and served with a sweet-and-sour sauce.

Yum Neua turns up the taste on a traditional steak salad with a dressing that along with the expected onions and tomatoes also includes mint, cilantro, chili and lemon. An authentic green papaya salad called Som Tum contains the fruit, green beans, shrimp, palm sugar, fish sauce and lime. Both salads are gluten-free, as are more than a dozen of the menu offerings.

Soups aren’t just for cold weather. Traditionally, they are served year-round. Chicken and coconut milk make for a wonderfully mellow Tom Kha Gai. Hot and sour soups with shrimp or other seafood are more pungent but still delicate.

By far, the most familiar and often-ordered item on the menu is Pad Thai, known by many as “the national dish of Thailand.” This mild but satisfying dish of rice noodles stir-fried with vegetables can be prepared with or without meat. It arrives garnished with fresh cilantro, crunchy bean sprouts, and lime wedges. It can be spiced up easily with chili sauce for a bit of heat.

Crispy Red Curry Duck is sublime with meat that is fried, then topped with vegetables and a sauce that’s mostly on the mild side where curry is concerned. Three Flavor Fish is a whole, deep-fried fish that nearly falls off the bones, served with pleasingly sweet and garlicky sauce And yes, the fuchsia orchid garnish atop the grated root vegetables is edible!

All sauces are made in-house for the freshest, most intense flavors. Despite the reputation of over-the-top spiciness that may make some diners reluctant to experiment, curries range widely in intensity from mild to hot. Chef Ivan Rodriguez hails from Mexico, but has extensive experience cooking Asian cuisine. He now helms two Basil Thai locations, those in Columbia and in Charlotte. He cautions that the green curry sauces can look deceptively tame but tend to be some of the hottest. He recommends that beginners start by sampling the milder Massaman curry dishes with potatoes and cashew nuts, before attempting to take on the more challenging levels of heat.

No matter the level of spice, dessert is a sweet finish. Try a fried banana with coconut ice cream and raspberry puree, or fried green-tea ice cream. Both are fanciful and fun treats to enjoy as the weather begins to turn warmer.

The strong and bracing Thai iced tea that’s traditionally served with cream or condensed milk gets an audacious but delicious update in a “Thaitini” cocktail that adds vanilla vodka to the mix.

Another Asian-themed drink is Basil’s “Sake-tini’; it exchanges the customary vermouth for dry sake, and the olive for a cucumber. A spring-like blend of flavors can be found in a fruity lychee martini, or a pineapple mojito. Westbrook White Thai beer is brewed in Mt. Pleasant, and has notes of lemongrass.

Each of the restaurants has its own style. Columbia’s Basil Thai is sleek and modern, with décor that evokes a cosmopolitan vibe with notes of the tropics. Soft greens and plummy browns create a balance of warmth and coolness inside the restaurant that seats about 100. Outside, the patio is more casual with industrial influences and a brighter green color scheme that can accommodate about 30. A louvered canopy above the patio deflects sun and directs airflow for comfortable dining during both daytime and evening hours. Some patrons like to dine at the convivial bar, too.

Whether or not the small Basil Thai group of restaurants will continue to expand remains to be seen. After all, when the Eang brothers opened their first place on King Street, no one could predict it would succeed, or if expansion would be fruitful. But the Carolinas are wonderfully welcoming that way. When something is good, we enjoy it fully, tell our friends, and keep coming back for more.