Black Rooster With a World View 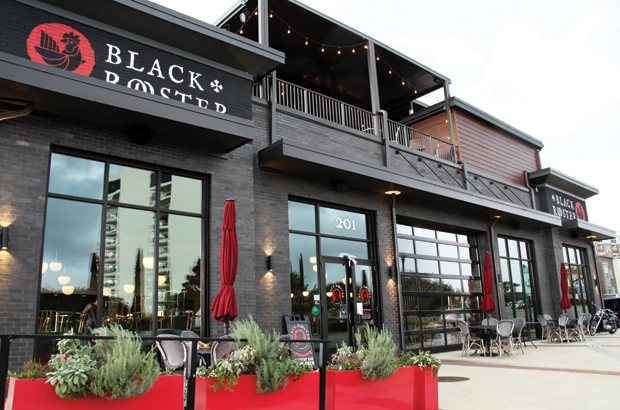 A noted chef who thinks big now calls Columbia home, and is broadening our horizons with “new, French-ish” cuisine. Kristian Niemi entered the restaurant world as a college student in Charleston; decades later, he proudly reigns over one of Columbia’s newest dining venues, Black Rooster, at the foot of the Gervais Street bridge in West Columbia.

“Black Rooster is my sixth restaurant in Columbia,” he says. “I was General Manager at the Blue Marlin back in the 90s, then there was Mr. Friendly’s, Gervais and Vine, and others.  This menu is based on eastern French traditional cuisine, along with some related themes from places where France had colonies, such as Viet Nam and Africa.”

There’s nothing ordinary about the life story of this world traveler.

Chef Niemi hails from northern Minnesota, and discovered the South when he was in the Army and stationed at Ft. Bragg NC. During four years in the Army he was trained for Intelligence assignments and learned the Farsi language. Traveling through Europe and the Middle East, he served as a Farsi translator/interrogator, whenever the Iranian officials would allow a foreigner to exit.

After leaving the military, he enrolled at College of Charleston in pre-med; next, a move back to Minnesota for a major in architecture at the University of Minnesota along with a degree from St. Paul College in culinary arts. During those flexible years, he continued working in food service.

The Southern transplant came to Soda City highly educated and looking for opportunity. “Remember the dot-com bust? I arrived in Columbia during a recession in 1998; there weren’t exactly any jobs for architects. It’s been the restaurant business ever since.”

In 2013 he founded The Great American Whiskey Fair, which quickly became the largest whiskey show in the nation, with more than 125 distilleries participating. He is also a partner in F2T Productions, which focuses on local, sustainable food sources for dinners and events. Of course this fine dining expert also has been deeply involved in The All-Local Market in Columbia. Wherever an emphasis on good food with a flair appears in Columbia, Kristian Niemie probably had a hand in it.

Of course time spent in Paris has been highly influential for this creative cook, as well as many forays into the Middle East and Africa and the Mediterranean. He’s bringing the world to our dinner plates.

He was the on-air chef for WLTX for seven years, as well as two seasons of Carolina Cooking, which was aired in 140 countries around the world.  His restaurants have been featured in numerous high-style publications, including Bon Appetit, Wine Spectator, and others.

Black Rooster is open for evenings only during this Pandemic era. This is a big disappointment for the weekend Brunch fans, who have become addicted to the Brunch goodies of the past. That menu offered French toast with Grand Marnier syrup, Croque Monsieur or Madame, Assiette Fromage, and other delicacies. Kristian promises a return to the Saturday and Sunday brunches as soon as circumstances make it feasible. Meanwhile, for now BR is open from 5 to 10 p.m. Tuesday through Saturday.

He wants you to bring a discriminating palate to Black Rooster, as well as a desire for a good time. Different specialties appear from time to time; one always-popular entrée is – are you ready for this? – the burger. “Our burger kind of tops the list,” as he describes it. “It’s done French-style, with Gruyere cheese and caramelized onion.” BR makes a big point that the steak frites are fried in tallow “just like McDonald’s used to do.” Other entrees include pork loin and duck confit. As for desserts, flan is a well-known Caribbean custard, but at BR, it’s Vietnamese coffee flan. Something special. 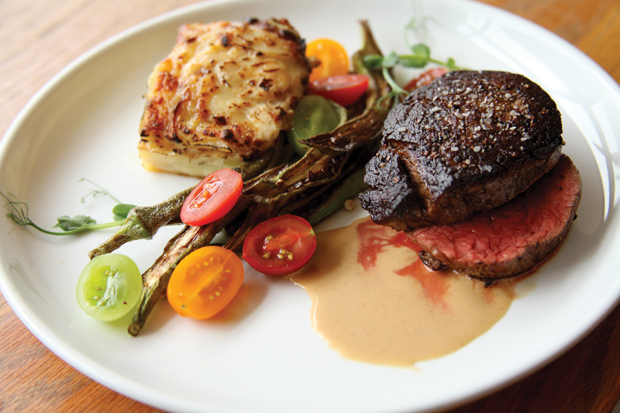 There’s also a Small Plate menu, for enjoying a blue crab crepe or onion soup gratinee along with your wine or cocktail.

Along with the food, take advantage of the rooftop open-air bar: sunset over the Congaree, with Columbia skyline across the vista – it’s a stage setting to remember.

Much has been made of the parking situation at Black Rooster, which is tucked into a corner of the Brookland Apartments property. Valet parking is free for Black Rooster customers, and was initially mandatory, as access was denied to the nearby parking structure. However, additional parking space has been opened up nearby. Details available on the Black Rooster web page. For most diners, the complimentary valet parking remains most convenient and easiest.

Like every other eatery in the U.S., Black Rooster is buckling down for survival during the pandemic. Chef Niemi has had to lay off some staff, and the rest of them are, he says, “barely” surviving the restrictions. The rooftop venue is extremely helpful, but in rainy or cold weather, having to observe the 50% rule indoors makes for some lean evenings. “We are somewhat resigned to the 50% rule being in effect for a long time, while infection rates remain high.”

Niemi’s family remains in Northern Minnesota; he misses them, but not the  winters there. “Columbia is home,” he says. “I live in the Shandon area, a nice neighborhood, very convenient to everything downtown. Now I have bought two acres across from the Riverbanks Zoo, to build a house. That should be a great place to live. I like watching Columbia grow and develop, and hope it will continue to do so.” So the architect is not gone, just dormant. It’s a good bet that the new house will reflect the eclectic tastes of its linguist/architect/chef/world traveler designer.