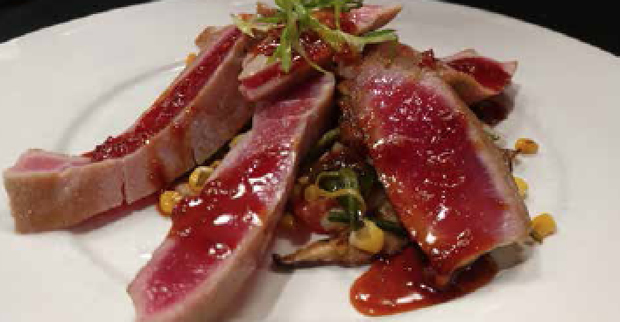 What about “local” and “fresh” and “choice?” You can clear up your understanding of these terms by dropping in at the Village at Sandhill in Northeast Columbia.  Manager Hankins will convince you that “casual” and “gourmet” can happen at the same place, namely, Blue Fin Restaurant.

“Blue Fin is a place where people can enjoy themselves in an easy, relaxed atmosphere,” he says. “I’d say upscale casual is a pretty good description of how we do things, and as for the food, just call it REAL.

“There are no pre-frozen meals served here. Everything is as fresh as one-day buying can make it, from seafood brought in daily to every locally grown farm product we can get. For example, croutons are cut and toasted from the bread we made that morning. The specials may change every day, based on what seafood was caught that morning on the coast.”

As conveyed in the name, Blue Fin emphasizes seafood. Lowcountry specialties such as shrimp and grits, and she-crab soup head the list as the most popular menu items. Grilled salmon, fried flounder, and seared tuna share the billing with the traditional Carolina seafood platter combining oysters, shrimp, and crab. One distinctive touch: sweet potato fries.

Of course, there’s plenty of beef and chicken at Blue Fin and even a home-style meatloaf that just might beat out your grandmother’s favorite recipe. The “blackened” menu includes mahi-mahi, filet tips, and a chicken Caesar wrap – a nod to New Orleans and Creole cuisine.

Columbia’s Blue Fin is owned by Freddy Lee, whose restaurateur reputation is anchored in Winston Salem, NC. Bernardin’s Restaurant there has been his flagship eatery for 25 years. Lee honed his skills there, developing a reputation for excellent, reliable food and a fun atmosphere. His empire was expanded with other North Carolina restaurants; now, in Columbia, Blue Fin stands for fine food and a lively bar scene. For happy hour most nights, the joint is jumping!

“We turn off the sound on the TV,” says Hankins. “We use closed captioning to keep the noise level manageable. There are deep discounts on beer and appetizers during happy hour, and you can track the Kentucky Derby or ball games with your friends. We have regulars who are here several days a week.” 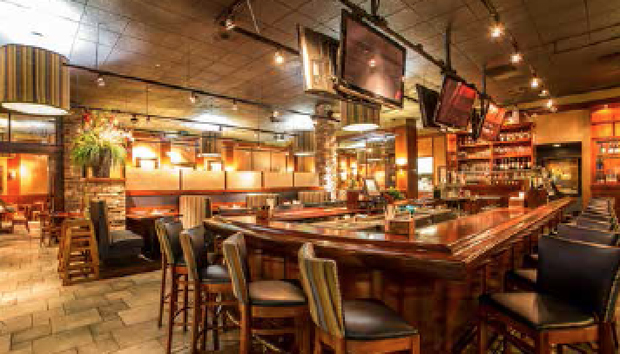 A small private dining room can accommodate up to 20 diners, and for larger parties, Blue Fin will mark off an area for their use, up to 50. The outside patio is favored by smokers. Hankins says the craft beer scene has exploded in the 10 years he has been in Columbia. This restaurant offers 20 different beers on tap, and half of those are local. An extensive wine list is available, along with Hankins’ services as guide. “As ‘Resident Wino,’ I am available to conduct fun and educational wine-tasting tours about eight times a year,” he says.

A native of Kentucky, Hankins graduated from Western Kentucky University and then gravitated to Sacramento. About 10 years ago, he made his way to South Carolina. “My first meal in Columbia was at Blue Marlin,” he recalls. “I had North Carolina trout, grilled asparagus, and an Atlanta beer. I still eat at Blue Marlin when I’m downtown.” Not long after his arrival, Hankins learned that Freddy Lee was looking for a restaurant manager. He’s been at Blue Fin ever since.

Many eateries here plan for a mid-summer slump, given the large number of Columbians who take sabbaticals at their beach or mountain homes. However, Blue Fin finds that there’s virtually no slow-down; steady patronage just keeps on coming. Maybe the littleneck clams or fresh swordfish provide the same atmosphere without leaving home.

Hankins loves what living in Columbia has to offer. The confluence of three rivers and the bike trails keep him outdoors on his rare time off from work, paddling or pedaling. “There’s great beauty here,” he says, “in the land and the rivers. The people are friendly and wonderful. It felt like home from day one.” He adds that the new pedestrian bridge at the Riverwalk will be opening soon, adding one more amenity for our enjoyment.

In a large stockpot, combine celery and onions. Cook for 5-10 minutes until soft, then deglaze with a cup of the sherry. Add water, crab base, crab roe, and heavy cream. Bring to a simmer and cook for 10 minutes on low while making a roux in a smaller pot. Add roux to soup and puree with an immersion blender until very smooth. Cook until soup comes back to a simmering boil and season with salt and white pepper. Remove from heat and whisk in the rest of the sherry. Serve garnished with fresh crab meat and finely minced scallions.