We’re known for it in all its scrumptious variations. Plan to try them out and pick your own personal favorite. 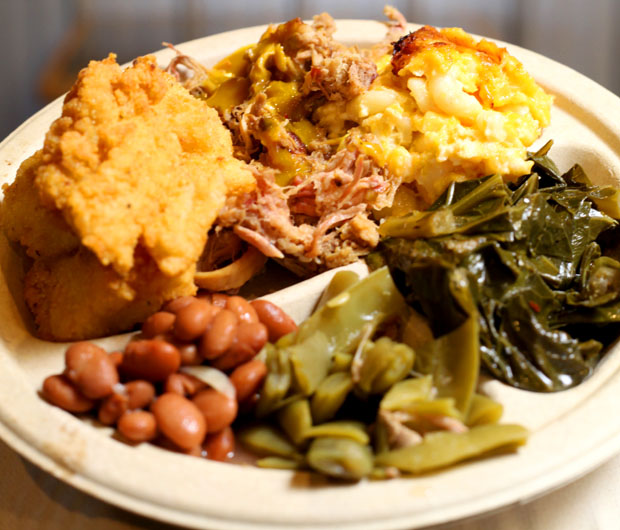 However you choose to spell it, barbecue is as southern as grits and sweet tea. It is a noun in these parts more than it is a verb or an adjective. In fact, barbecue supposedly originated in South Carolina. When the first settler brought pigs from Europe, Native Americans taught how to slow roast them over an open pit. Sauces came about later. Some who sell barbecue swear their meat is the best, while others bank on “secret recipe” sauces. Barbecue is so popular in South Carolina, in fact, that it has become the catered meal of choice for many memorable events – from small anniversary parties to upscale weddings. There are dozens of barbecue establishments in and around Columbia alone; here are a few:

It started in Memphis, Tenn., but in 1962, the 31st franchise opened on Rosewood Drive. Currently, the restaurant is on Alpine Road. Back then, Little Pigs offered just counter service and seating for 36. Today, 160 people can enjoy a large buffet service with everything from the barbecue to ribs, pork chops, chicken, wings, and fish to collards, hash, tomato pie, and of course the staple side to barbecue: macaroni and cheese. Owner Champ McGee says all three of his traditional South Carolina sauces – tomato-based, mustard-based, and vinegar pepper are worth trying. 788-8238

Open from Wednesday through Saturday, 11am-8pm, folks stand in line for overnight-smoked pork that’s pulled and seasoned to perfection. The Southern Pride wood-burning smoker, plus great ingredients and experience combine to make this food a favorite of locals and the visitors who’ve heard about them from food review sites. Their smoked, then fried wings are popular and the slaw is memorable on its own, or as an accompaniment. They cater for a number of events, and offer additional southern favorites such as shrimp and grits and steak. On site on Augusta Highway, and for take-out, the homemade banana pudding is the dessert of choice. Owner Jim Thompson and his staff are friendly folks who want you to feel at home. Try them out and you’ll find a staff filled with southern hospitality. 356.8284

Co-owner Gene Antley says his restaurant is worth seeking out on the “other” side of Devine Street. It is tucked on the west side of Assembly Street – back behind the Strom Thurmond Wellness and Fitness Center and near Todd & Moore. He says people call him all the time in frustration explaining that they are driving up and down Devine Street trying to find Palmetto Pig. He says the sauces, hot, ketchup-based, and mustard-based, are the best he has ever tasted, “and I’ve tasted many, many sauces over the years.” Palmetto Pig’s mustard-based sauce is the result of an elderly gentleman who visited the restaurant and claimed to have an amazing sauce. He allowed Antley to taste it; Antley was impressed and asked how much the recipe would cost. The man said he did not want to sell it. A week later, the gentleman walked back into the restaurant and said he would not sell it but would like to be able to eat at Palmetto Pig with his wife, for free, until he died. Antley says he lived for three more years, and would even come into eat barbecue after spending time in the hospital. “He would still have his hospital bracelet on.” When the man passed, Antley sent a large spray of roses to cover his casket. “That sauce of his is the best I’ve ever found … no joking,” he says. 733-2556

Doc’s on Shop Road is known not only for barbecue, but also for offering southern fare that is about as down-home as it gets: fried okra and pickles, catfish nuggets, and sliced brisket are just a few regular items on the menu. Doc’s Drinks include natural sugar bottle Coke, old fashioned bottled sodas, signature peach tea, lemonade and, of course, sweetened and unsweetened tea. Besides a myriad of sides and two types of barbecue, and much more, Doc’s is known for its chocolate cobbler. And just because Doc’s has a buffet and several items are fried, there are still some healthy choices such as turkey barbecue, and even wraps and salads. Entertainment is offered Thursday, Friday, and Saturday evenings. 799-1532

Wells Gibson decided after he retired from a career in law enforcement with the Lexington County Sheriff’s Department that he would fulfill a lifelong dream: open a barbecue restaurant. He had been cooking barbecue for years before, even entering and winning barbecue competitions. He and his wife, Cindy, opened the Chapin establishment in 2000; their barbecue attracts not only locals, but people traveling up and down Interstate 26 and those visiting the area. “There’s one professor from San Diego who teaches at USC and comes in here every year to eat,” says Gibson. “Some people regularly drive 45 minutes. It’s just a good country-cooking place that has great barbecue and a whole lot more.” Farm Boy’s mustard-based sauce is one that has been handed down for generations. Another sauce is the spicy vinegar and pepper influenced by flavors originating in the Lowcountry. Each day there are menu staples, but Gibson adds whatever items he feels like cooking. A favorite is the catfish stew. Fridays he offers flounder and shrimp, and Saturdays are special chicken wings and raw fries. “We have a good following because we have good food and good prices,” says Gibson. 345-7600

Ernest and Milton Zanders opened True BBQ in 2010 in West Columbia. Milton says no sauce is put on the meat prior to customers purchasing the barbecue. “We want them to get a true taste of the meat before they dress it up,” he says. To “dress it”, True BBQ offers three distinct sauces: Sexy Lady is tomato based, Pretty Lady is mustard based, and then there is the vinegar and red sauce. Another draw to True BBQ, according to Milton, is their special recipe hash and rice. Hash is a combination of meat stew and gravy and is served over rice. All the dinners include hash and rice, as well as two sides. Eat in or take out from True BBQ, but only Wednesdays through Saturdays. 791-9950

Maurice Bessinger started serving barbecue in South Carolina in 1953 and opened a restaurant in Columbia in 1955. He passed last year at 83 years old. Today, his sons, Lloyd and Paul Bessinger, his daughter Debbie Bessinger, and his grandchildren are carrying on the legacy he started. Other than adding locations – a total of 11 in the Columbia area – not much has changed for Maurice’s. Barbecue is still cooked for 24 hours over wood coals at the original fire pits in West Columbia. No gas or electricity is used in the process. Maurice’s sauce – a mustard-based secret heirloom recipe the company calls Southern Gold is not only served in the Piggie Park sit-down or drive-thru restaurants, but nationwide as well. 1-800-628-7423

On Rosewood Drive, in the shadows of the Fairgrounds and William Brice Stadium and tucked underneath a railroad bridge, is The Southern Belly BBQ. Casual, quaint, inviting home-like ambiance attracts customers to try barbecue with a twist. Sauces are made from scratch and some are traditional while others unique. For example, Asada is inspired by South American and Afro-Caribbean recipes and is a spicy, tangy, tomato and vinegar blend. Sherman, named for the general who reportedly torched Columbia at the end of the Civil War, is hot and spicy and tomato based. There are toppings, such as Applewood bacon or grilled Vidalia onions for sandwiches. And, there is a variety of cheeses to choose from. The Southern Belly has a traditional barbecue sandwich, but it also has clever creations; the Wookie is double the meat, plus three cheeses, double the bacon, grilled onions, and a center slice of bread – all served on a buttered French roll with their Dark Side sauce. According to owner Jimmy Phillips, they are always experimenting with flavors and combinations and encouraging feedback from their customers. Phillips says he strives to use ingredients that are locally grown or raised, hormone free, antibiotic free, and even organic. 667-9533

Like many barbecue restaurants, Shealy’s has a long tradition. It was established in 1969 and has evolved into not only a menu establishment, but an all-you-can-eat buffet serving much more than just barbecue. Fried chicken is regularly available, as are fresh, home-cooked vegetables. A country breakfast buffet is offered on Saturday mornings. Yet, there are two enormous trays of pre-sauced barbecue on the buffet for patrons who want to try both or stick with a preferred favorite. Shealy’s sauce, vinegar and pepper or mustard-base, has become so sought after that fans can purchase it in the Batesburg-Leesville restaurant or online. And, each night of the week offers a different special: Monday is Chef’s Choice, Thursday is Country Fried Steak, etc. 532-8135

Like many barbecue restaurants, this one started in a back yard with many attempts at mastering the art of roasting meat. The hobby became a business and the business spurred a following. There are two Hudson’s locations in Lexington: Hudson’s Smokehouse & Saloon and Hudson’s Smokehouse Express. As is the case for many barbecue establishments, catering became a significant part of the business. Hudson’s now has its Classic Catering division – and it has a separate menu for tailgaters. Barbecue is cooked in smokers for 16 hours. A traditional southern barbecue buffet is served during lunch, while a barbecue and calabash buffet is offered in the evenings – in case there are seafood lovers as well. There is also a full menu including a few novel items such as BBQ Pork Nachos, BBQ Chicken Fingers, Big Smokehouse BBQ Burger, and Smoked Chicken Salad. 356-1070

Bone In Artisan Barbecue on Wheels

Instead of staying in one place, this barbecue restaurants shows up at cultural events and various locations in and around town. On the website is a Find the Truck This Week menu option to learn how to dine on their gourmet barbecue options. Southern-inspired with a twist, Bone In’s menu offers such interesting items as 14-hour smoked beef brisket served with a hickory hoisin sauce on house-made focaccia with gingered apple carrot slaw and side choices. There is country pork pate, traditional pulled pork sandwiches with a choice of five different sauces, and crispy fried chicken breasts served on lemon waffles and accompanied by pickled green tomatoes, candied bacon, and mixed green and lemon aioli. Their Bone Chips are hand-cut raw fries topped with shredded brisket, melted pimento cheese, house-pickled banana peppers, green onions, and crispy fried onions. There is more to discover – even tailgate specials. 728-7512