Nonprofit Unites Vets and Civilians through Storytelling and Art 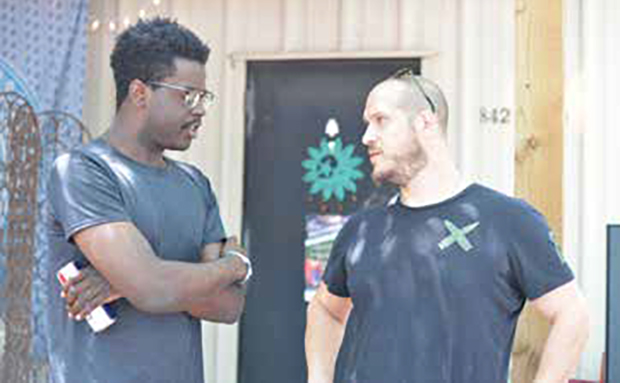 After four years and two combat tours, Marine infantry sergeant Robert LeHeup left the military a decorated soldier who, with his brothers in arms, had been triumphant in theater. Overseas, his was a company of battlefield rock stars and badasses. Among the first armed forces in Afghanistan in 2001, they captured the Kandahar Airport and the Embassy in Kabul. LeHeup had served with honor and distinction … but all was not well. Not at all.

For years after leaving the Corps, LeHeup could not unsee many things that he had witnessed in various war zones.

“While I was in, I was affected by things that happened,” LeHeup said. “I thought I didn’t let it get to me. But when I got out, I began spiraling downward, like so many vets do.”

And like so many vets, LeHeup turned to any mind-altering escape he could find to deal with the rage and despair that consumed him, anything to numb the pain. As mental and emotional darkness overtook him, one day he sat down to write his final words.

“In a suicide note, I wanted to explain why I was doing this. And as I was writing it, I felt a drive to be entirely honest, to get it all down on paper,” he recalled. “The more I wrote about it, the more I realized it was part of a larger story. It ended up becoming a memoir. By the time I finished writing it, so much pain had been lifted that I was able to look forward to the future.”

Having earned a bachelor’s degree, he taught creative writing to inmates and underprivileged children. He was fueled with an enduring desire to give back. Soon, LeHeup began pairing veterans with writers and artists of all disciplines to tell veterans’ stories through original, collaborative prose and artwork. The result is a touring art exhibit inspired by veterans’ stories and the publication of an anthology of the works. LeHeup published the first collection of stories and artwork in Bullets and Bandaids, Volume One, in 2012. Volume Two came out in 2016. Bullets and Bandaids became a 501(c)3 nonprofit in 2019 and published its third anthology in 2021.

“I don’t think your average civilian understands. Vets have been separated from society by things such as stigma, language, culture, and geography,” he explained. “Vets come back and, within days, seem to disappear. They are filled with anger and have no place to put it, or they are constantly paranoid. That builds into other things like substance abuse, domestic violence, and depression.”

In his darkest hours, LeHeup felt entirely alone. He believed that confiding in friends and family would only burden them. So he kept everything inside — until an invitation to deliver a local TEDx talk about his war experience actually transformed his thinking. Ultimately, he hopes Bullets and Bandaids can help reinforce the common human journey we all navigate.

‘The Ghosts Don’t Go Away’

Army veteran Kevin Brewer is haunted by images from his 2006 deployment to Iraq. The date May 5 is burned in his psyche.

“It was the easiest and the worst day for me,” he said. “I wanted to accompany soldiers on a National Guard convoy, but my commander denied my request.” It was a fairly routine mission, delivering supplies to an orphanage. While en route, the truck hit an IED (Improvised Explosive Device). Everyone on the convoy was killed. As he worked to clear the wreckage, Brewer’s eyes fixed on blood-soaked stuffed animals and teddy bears scattered among the debris.

Fast forward to 2022. While watching a television report on the war in Ukraine, a similar image in an instant took Brewer right back to that awful day. Incapacitating anxiety drove him from the room.

“Seeing that footage from Ukraine, I almost felt like there was a physical snap in my brain,” he said. “I am never going to be the same, and that was just one day.”

After retiring from the Army in 2017, Brewer floundered for a couple of years. “You kind of carry a chip on your shoulder,” he said. “In society, there was this absolute cluelessness about the uglier parts of the world, the darker parts of the human experience. There was resentment on my part.”

Brewer’s first full-time job after retiring was at an arts academy. One day he was appalled to see a co-worker at the school launch into a tantrum because parents had been late with their children. “He had no perspective,” Brewer exclaimed. “I said, ‘Look, calm down! Everyone will live today. Everyone will go home today with their life, limbs, and eyesight intact! No one died!’”

“The ghosts don’t go away,” Brewer concluded. “You have to figure out how to make friends with them.”

‘In the Military, You Had People’

Navy veteran Corey Norrell says he really didn’t suffer any trauma customarily associated with military service. He had a pretty standard experience with no combat duty. Still, he feels the divide between veterans and civilians and sometimes misses the Navy.

“For me, it was the camaraderie that I missed the most,” he said. “In the civilian world, it was kind of disheartening. You couldn’t do the sh*t-talking. Nobody really cared about how you felt about something. In the military, you had people who knew and cared.”

One manifestation both Norrell and Brewer described was the abrupt shift in status they experienced after getting out of the military.

“You work your way up in the military, but when you get out, you are the low man on the totem pole again,” Norrell said. “The Navy is not a training program. Being able to drive a ship wasn’t a qualification sought in the civilian workforce. I had to start back at the bottom again. I couldn’t even get a job bartending at first.”

“Noncommissioned officers in the military are always putting out a fire. … They are on call 24/7. You get used to that pace, and then you just slam on the brakes,” Brewer said. “It’s a harsh reality. Your organization is moving on without you, and it’s strange. Instead of zero to 60, you go from 60 to zero in a split second. You feel washed up and useless.”

Just as they might lose the heavy ruck when they get out, soldiers and sailors still bear the weight of their experiences and the people they grew close to.

“When you get back, you carry with you the people you lost and the anniversaries of those losses,” Brewer noted. “Then, you keep losing them to depression, overindulgence, and even suicide.”

LeHeup acknowledges that, while telling their stories doesn’t heal veterans, it takes a significant step toward healing: “On a level that is hard to quantify, I think we make a profound impact.”

The next Bullets and Bandaids public tour is planned for November. To learn more, visit www.bulletsandbandaids.org.