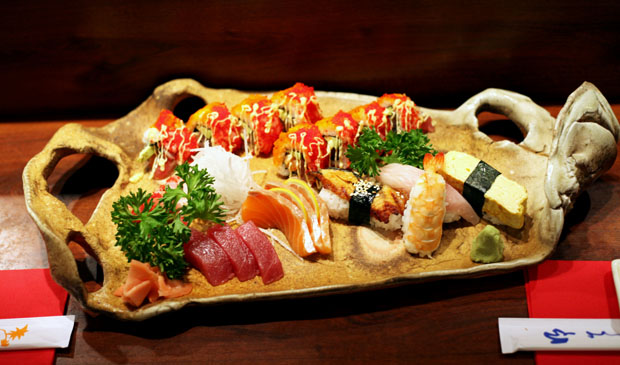 When you enter a traditional Japanese restaurant, the sushi chef behind the counter will often call out, “Irrashaimase!” It means welcome.

Back when Camon Japanese Restaurant and Sushi Bar opened in 1985, it was a compact little place tucked away in downtown Columbia, in a nondescript building on Assembly Street. Patrons entered through a sliding shoji-style wooden screen door that opened into a dining room with just a handful of tables and a small sushi bar.

That’s where Shigeru Kobayashi first greeted his customers with a hearty irrashaimase – and where he continues to do just that, thirty years later.

He and his wife, Shizuko, came to the U.S. from Japan. Shigeru worked at Columbia’s popular Yamato restaurant, and legend has it that he was one of the chefs whose face appeared on a giant billboard along the interstate. The couple decided to open their own place, one that would offer not the showy, table-side cooking that had become trendy in the restaurants that were popping up all across the U.S., but would instead showcase the authentic sushi, sashimi, entrees, and appetizers of Japan, all served in a serene setting. They named it Camon, which means “family crest” in Japanese, to signify that theirs would be a family-run eatery.

Camon is where many Columbians encountered their first sushi, and they might be surprised to learn that the term means simply “seasoned rice.” Sushi need not contain raw fish, or any fish at all – although some of the best-loved preparations feature raw sea creatures with tastes that range from mellow to more challenging.

Sushi has a long and auspicious history, dating back more than a thousand years to a time when the dish consisted of fermented fish and rice, and had been developed as a method to preserve food. “Modern” sushi is thought to have appeared sometime in the nineteenth century, and was considered a type of fast food, since it was not fermented and could be eaten using one’s hands.

Although sushi and other fish-centric dishes have helped make Camon an enduring favorite for three decades, there’s much more to enjoy here. Some diners like to sample their way through the appetizer menu. Gyoza are succulent pork dumplings that can be steamed or fried, served with a soy-vinegar sauce. A teriyaki glaze tops tender yakitori chicken skewers. Edamame soybeans are fun to pop from their pods and have a slightly nutty flavor, almost like a Japanese version of boiled peanuts. Soups are delicately seasoned, and the house ginger dressing brings a sharply pleasant taste to salads. Most impressive of all is Camon’s seafood salad, an elegant arrangement of shrimp, squid, and octopus with cucumbers, seaweed, and a sweet vinegar dressing known as sunomono. Dipping sauces, dressings, soup stock, and glazes are all made in house.

Entrées can be ordered à la carte or as part of a dinner combination special of beef, chicken, fish or shrimp, served grilled or flash-fried tempura-style. The levels of spice can be adjusted according to each diner’s preference, and the kitchen is happy to accommodate special requests. One visitor remarked recently that as a vegetarian, he appreciates the staff’s thorough knowledge of which items will be suitable for him, and more importantly, their willingness to make substitutions without compromising either the presentation or the taste of what’s on the plate.

Nevertheless, sushi and sashimi are the stars of the show. For nigiri sushi, the sliced fish is placed atop a cushion of rice. For rolled sushi or makimono, the chef forms the ingredients into a cylinder, then cuts them crosswise into slices. Sashimi refers to the sliced fish that’s served without rice.

The uninitiated can begin with sushi classics such as cucumber rolls and tamago (omelet) that contain no fish, or shrimp tempura that combines the cooked shellfish with rice. From there, it’s an easy step forward to the mild flavors of avocado and crab that comprise a California roll, or the smoked salmon and cream cheese of a Philadelphia roll. Salmon is surprisingly buttery. Tuna has a heartier flavor. Eel is slightly sweet and a bit smoky. Experienced sushi aficionados looking to take the next step in their culinary journey can get guidance from their servers to help develop a palate that can appreciate exotic octopus, squid, or sea urchins. There’s a capital city namesake, too: the Columbia roll contains shrimp, crab, eel, cucumber, avocado, omelet, and fish roe.

Sushi is an art form, one that takes years to master. In addition to maintaining his own proficiency, Chef Kobayashi has trained many apprentice chefs, some of whom have gone on to work in highly-lauded restaurants across the country. Yet this sushi master still hones his skills daily, as he selects, slices, chops, rolls, arranges, and garnishes fish expertly on plate after plate.

Shigeharu Kobayashi is the owners’ son, one of three children who grew up in the restaurant family. These days, he’s taking over some of the bookkeeping and business-related tasks that his mother has managed for many years. Although he doesn’t profess to have any culinary skill, he understands the dedication a chef must possess: “It takes a lot of work to ‘stay the same.’ A chef is always improving.” That’s something the younger man has observed his father practicing for a lifetime.

An expansion into an adjacent space allowed the restaurant to double its seating capacity back in 1997, although it’s still not large by any measure. With seating for about forty, it has maintained its cozy, urban feel. The sushi bar still seats a scant half-dozen or so diners.

While some restaurants seem to constantly reinvent themselves, Camon has made few changes over the years. Its philosophy is to celebrate tradition, which is why guests – whether it’s their first visit or one of many over a thirty-year span – will be welcomed with an enthusiastic “Irrashaimase!” from the Kobayashi family patriarch. And at the end of the meal, when the chef bids farewell with “Domo arigato,” even those who don’t speak a single word of Japanese will leave understanding that they’ve been heartily thanked for partaking.