New technologies are making it easier to fight cancer and win, starting at the molecular level. 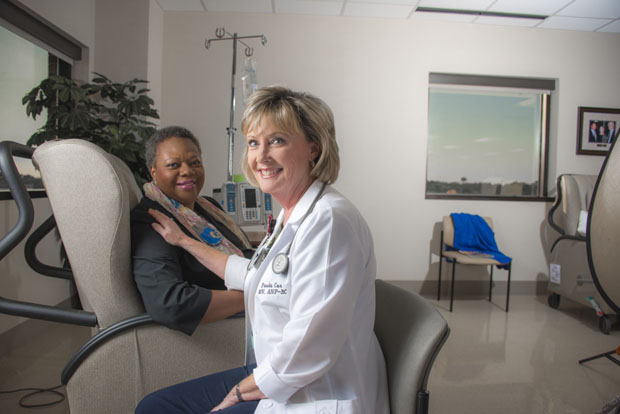 Robert Stuart had been a practicing oncologist for nearly two decades before he himself personally experienced the dread of a cancer diagnosis. Even though he knew, with the latest research and technology, that his disease likely was survivable, the news still came − as it does for most − as a sucker punch. “Fortunately, the cancer was confined to the kidney,” he said. “I had surgery and have been well for 24 years.”

The physician and professor in the College of Medicine at the Medical University of South Carolina in Charleston is passionate about cancer research and its increasing potential to make cancer a one-time Goliath that now routinely is felled by a single stone.

According to the American Cancer Society, deaths from cancer have declined by 22 percent overall since the early 1990s. “I have frankly never been more enthusiastic,” Dr. Stuart said. “I am a glass-half-empty guy generally. Even so, I am very much encouraged … Clearly, treatment has a lot to do with the reduction in mortality with cancer.”

Conventional treatments for cancer historically have included surgery, radiation and chemotherapy, or some combination thereof.

“I am not a surgeon,” Dr. Stuart explained. “My perspective is from somebody who treats cancer patients with drugs.” Insofar as this approach is concerned, there are two types of drug therapy – targeted therapy and immunotherapy.

Targeted therapy uses information about the molecular, biological differences observed in the laboratory between cancer cells and normal cells to develop drugs that attack only the cancer cells and leave the healthy ones intact.

Before 2001, when the FDA approved a revolutionary drug called Gleevec®, fewer than half of patients receiving the rare, usually terminal diagnosis of chronic myeloid leukemia (CML) survived for more than seven years. Many called it a “miracle drug,” because, after five years of Gleevec therapy, 89 percent of CML patients survived. Whether this promising advance could lead to a cure for other forms of cancer, however, is far more complicated.

“CML is the only known human cancer caused by a single mutated gene. Every other type of cancer has multiple mutated genes, up to 100 or more,” Dr. Stuart explained. “In the most difficult-to-treat cancers, there may be scores of gene mutations, and we don’t have a good way of knowing which ones are important.”

There is no question that the development of Gleevec and related drugs contributed mightily to the fight against cancer. Researchers are aggressively conducting genetic and molecular analyses of tumors in an attempt to match drugs to their corresponding types of cancer.

“This (discovery) created a stampede to identify mutated genes in other cancers in the hopes that scientists could block the action of those mutated genes,” Dr. Stuart said.

In the past decade or so, more than a dozen different immunotherapy agents have been approved for about 10 types of cancer. Meanwhile, some 800 clinical trials nationwide are actively seeking out additional cancer-fighting agents.

One approach that has evolved from this research employs the chimera antigen receptor, or CAR. The way it works is that clinicians draw the patient’s blood and isolate the T cells in the laboratory. These cells then are given an artificial receptor that can recognize a targeted antigen. The enhanced cells then are reinfused into the patient to do their work. “This method has produced some very spectacular responses,” Dr. Stuart said. “If we could refine this approach, we might be able to treat any cancer that way.”

Dr. Quillin Davis, Medical Director for Cancer Services at Lexington Medical Center, Physician Practice, noted that cancer research effectively has ended the decades-old “kitchen sink approach,” when oncologists threw every available therapy at the disease hoping that at least one of the therapies would prove effective. This resulted in invasive, sometimes painful treatments that left unpleasant, sometimes serious, side effects. “Not everyone responds to treatment the same,” he said. “Now we have better treatments with less toxicity.”

Like Dr. Stuart, Dr. Davis also stressed that the use of genetic testing to inform an individual’s treatment approach is a major positive trend. Because some 10 percent to 12 percent of cancers are linked to heredity, genetic testing helps gauge risk and inform prevention measures for those patients.

“What has changed is that medicines are being tailored to the genetics of the patient’s actual cancer,” he said. A game-changing example has been Oncotype DX testing for breast cancer patients. This genomic test analyzes the activity of breast cancer genes to determine the likelihood that a cancer will to grow and respond to treatment. This information helps predict how likely the cancer is to recur, whether chemotherapy would be effective, and whether radiation therapy is indicated. Sending a clear sign of the test’s validity, about 90 percent of insurers cover the test.

“This is probably the biggest trend in how chemo is given to breast cancer patients,” Davis noted.

Still, oncologists are moving farther away from chemotherapy and more toward molecularly targeted therapies.

Genetic testing has led to the development of a revolutionary medicine for early stage breast cancer − Herceptin. The HER2 gene makes a carcinogenic protein called a HER2 receptor. For women testing positive for the HER2 gene, Herceptin is able to block the overactive HER2 receptors so they do not receive signals to grow with abandon and become cancerous.

“The operation for breast cancer used to be removal of the entire breast and all the muscles underneath the breast,” MUSC’s Dr. Stuart said. “It was a mutilating operation.” Now there are far more options that do not require major surgery.

Some 40 years ago, it was not unusual for patients diagnosed with lung cancer to be advised to get their affairs in order and make the best of the time they had left. Lung cancer remains the leading killer of Americans, accounting for 27 percent of all cancer deaths. But these statistics continue to improve.

LMC is participating in an important clinical trial called Lung Cancer Master Protocol (Lung-MAP), which uses a targeted genomic profile screening to match patients with compatible studies of investigational new drugs. This screening improves the likelihood that a patient with advanced cancer that has not responded to other therapies can receive a drug targeted at the genetic profile of their specific tumor. If successful, the Lung MAP trial may lead to the approval of safer and more effective lung cancer therapies.

“I came to Columbia specifically to work at Lexington Medical Center because LMC is really one of the best-run hospital systems in the entire Southeast,” Dr. Davis said. “We have a framework in place that will allow us to be successful.”

Already, advances in radiation treatment have greatly improved the patient experience by dramatically reducing the duration and side effects of treatment. At the center of this remarkable trend is LMC’s TrueBeam™ linear accelerator, an image-guided radiation therapy (IGRT) that can deliver more accurate, highly concentrated doses of radiation from every angle to tumors that may be hard to reach with surgery. Because it delivers a faster dose rate than traditional linear accelerators, TrueBeam™ can cut a patient’s time spent receiving radiation in half or more.

Conventional radiotherapy can expose large areas of healthy tissue to radiation over a number of sessions. TrueBeam™ delivers radiation only to the desired target, allowing more healthy tissue to be spared. Because of its precision, the patient does not have to endure as many treatments and completes treatment much sooner. In fact, Dr. Davis said that a patient treated with the TrueBeam™ can finish in 1-5 treatments instead of 35-45 treatments.

Surgery was the longtime go-to standard for cancer care. Over the years, surgery has gotten more sophisticated and less invasive, employing laparoscopic technologies that involve the physician making tiny abdominal incisions (usually through the naval) so a laparoscope tube, camera, and other tools can be inserted into the body to allow surgeons to view internal structures on a video monitor and perform procedures. Recovery time for this less invasive method is much shorter than with conventional surgery (hours as opposed to days).

“Probably half of all cancers happen by chance; the patient was simply unlucky,” Dr. Stuart said. “The best screening tests we have are the pap smear and the colonoscopy. Both detect problems early and prevent cancer from developing or growing. The one thing that would really make a dent in colon cancer is if more people got a screening.”

Dr. Davis observed that advanced technology and testing are increasingly available in smaller community hospitals, not just large research hospitals as in the past. “We’ve definitely seen a democratization of these advanced treatments,” he said. “Access is greater than it has ever been.”