She made the shift from law to higher education and in the process, found her true calling 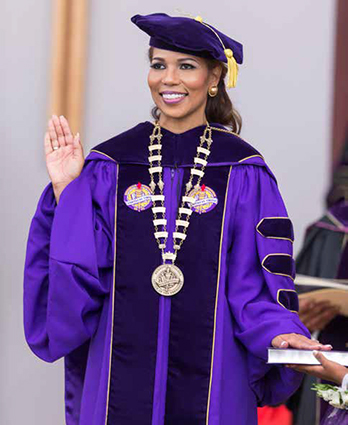 Once a practicing attorney in West Virginia, Benedict College President Dr. Roslyn Clark Artis found her destiny in higher education when a stint as an adjunct professor proved higher education was her true calling.

“The idea that you can change someone’s life in an hour and fifteen minutes twice a week was a heady notion for me and certainly much more rewarding than anything I had experienced in the practice of law,” she recalls.

“While the practice of law was certainly fulfilling, I realized that teaching was, in fact, my passion,” she says. “A single note from a student crystallized my decision to make the shift from law to higher education. I was teaching a course in legal research and writing. At the conclusion of the course, the student handed me a note that read, ‘You changed my life. I never thought I could be a lawyer. After meeting you and taking this class, I know I can.’ I must have read those words a hundred times. It is that simple. Education affords me the opportunity to change lives and touch the future through my students and their families. While the law can compel opportunity, education creates it.”

After obtaining a doctorate in higher education for her new career, Artis joined the faculty of Mountain State University. Soon, she was chosen for leadership positions. She became MSU’s chief academic officer before becoming president of Florida Memorial University. In 2017, Artis became president of Benedict College, where she has achieved a national reputation as a champion of Historically Black Colleges and Universities.

Congressman James Clyburn is among those bestowing high praise. “Dr. Artis is a fierce advocate for educational access, and I am confident in her ability to advocate for positive and strategic transformation. She is a trailblazer, shattering the glass ceiling,” he said, on appointing her last year to the National Advisory Committee on Institutional Quality and Integrity. The committee advises the U.S. Secretary of Education on academic accreditation and certification in higher education.

The prestigious appointment is one of more than 300 awards and recognitions Artis has achieved for her work. With her leadership and acumen, her counsel is sought at the highest levels of academe across the country.

Under her leadership, Benedict was awarded the 2019 American Council on Education Fidelity Investments Award for Institutional Transformation. The award recognizes institutions that have responded to higher education challenges in innovative and creative ways and achieved dramatic results in a brief period.

In 2018, she was named “Female HBCU President of the Year” by HBCU Digest. Benedict was also named 2019 HBCU of the Year by HBCU Digest. “HBCUs are merely three percent of the higher education ecosystem, yet they have produced most of the doctors, lawyers, educators, engineers, religious leaders and legislators of color in this country. We have been punching above our weight for generations, and that story must be told,” she says.

In 2020, she was named “President of the Year” by Higher Ed Dive for her leadership in navigating the unprecedented COVID-19 challenges of 2020, a recognition she finds especially gratifying.  “With students as our polar star and safety as our guiding principle, we responded to the pandemic in ways that affirmed our commitment to students, protected the lives of our community members and simultaneously addressed the most critical needs of our community,” says Artis. “To be recognized nationally for our efforts was both affirming and encouraging.”

Also in 2020, Benedict College opened a new Women’s Business Center funded by the Small Business Administration to help women entrepreneurs start grow businesses, reopen or recover from COVID-19 and create jobs for their local economies. It is only the second women’s business center affiliated with the SBA at a historically Black college or university (HBCU).

In January, Artis was named among 13 leaders in higher education for advancing diversity, equity, and inclusion. The award was made by the Association of American Colleges and Universities and Cengage, an education technology company.

Artis is proud of Benedict’s transformative progress in academic achievement and innovation. Yet, she remains firmly focused on the future. One of her priorities is the expansion of the college’s business development center and the women’s business center. She is committed to increasing the college’s programs in cybersecurity, environmental engineering and computer sciences. She also anticipates the college’s Center for Racial Reconciliation will have expanded to reflect its national prominence in social issues and educational and health equity.

In her short time at the helm of Benedict College, Dr. Artis has made an indelible impact, coining the phrase, “#TheBESTofBC.” Celebrating its 152nd year, Benedict College, in downtown Columbia, is a private co-educational liberal arts college serving almost 2,000 students. g