Charleston Flavor on the Saluda

Modern Southern style with casual elegance makes this home near the river a perfect retreat for entertaining and everyday living. 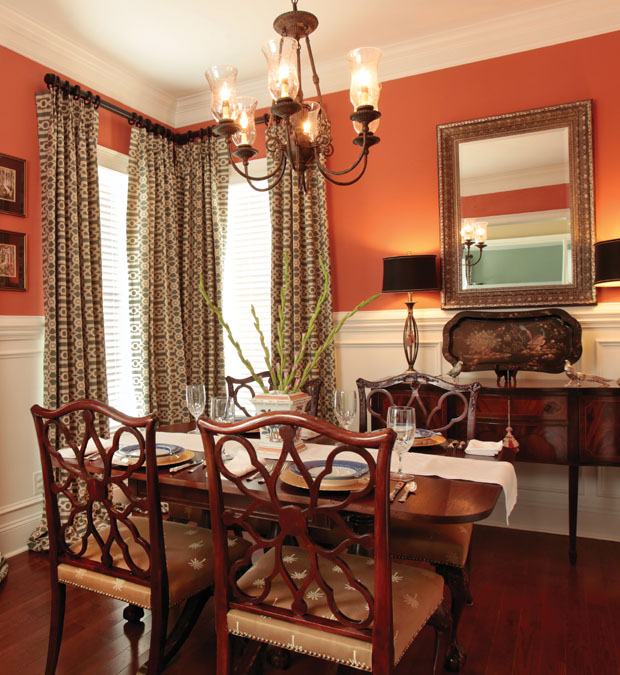 When you think of the great Southern capitol of charm and grace, naturally your thoughts turn to Charleston, South Carolina. With a rich history, the Charlestonian look is distinctive. When Bo and Ginger Gdovin decided to build a new home, it was the classic Lowcountry feeling they were after.

The Saluda River Club in Lexington offered them the perfect place to make it happen. Working with Andy White from Lifestone Homes, Bo and Ginger had their home ready in just eight months, which is a short turnaround in terms of custom home construction.

This busy couple appreciated efficiency, with both the husband and wife involved in active careers. Ginger works in the flooring business and her background is interior design. Her experience helped the couple to have a more fully formed idea of what the home’s details should be. Their great working relationship with the builder made it easy to quickly make any changes as the construction progressed. Bo is part of a successful restaurant venture with multiple locations, so he is accustomed to changes in plan.

The design of the home’s floorplan evolved from a standard offering to become a true custom plan. When they first sat down with the builder, they were enamored with the sales center model. As the conversation continued, it became clear they wanted a unique layout. Bo and Ginger then met with Brian Goings to come up with the final plan.

“We wanted something that had more of a Charleston feel, with classical features and fixtures,” Ginger said. Bo agreed, adding, “We knew we wanted a formal dining and living room, which was important to us.” The River District in their neighborhood has a Craftsman era look, but the Gdovins’ design leans away from the trend, without breaking the unified look of the existing homes.

As you move from room to room, you see the evenness of the elements. In the dining room, you’re not overwhelmed by space. “Our last house had formals that were much bigger and we didn’t use them. But, here we do use these rooms,” Ginger said. Bo was very involved in the development of the dining room and even selected the charming terra cotta color scheme. The drapery fabric determined what they were doing with furnishings in both rooms. Antiques populate the front of the home in classic lines. The look is modern Southern; you don’t feel as if you’re walking into your grandmother’s house.

The materials used in draperies and accessories were discovered at a local fabric store. They wanted to incorporate color in a more mature palette with classical elements. The modified diamond pattern in the dining room drapes is timeless and echoes the design of the back of the dining room chairs. “In the act of putting the things together, I’m always subconsciously designing, whether I realize it or not,” Ginger explained.

“We didn’t want to do something we felt we’d have to change every two years,” she continued. “We didn’t want to have to remodel or repaint. Our tastes aren’t too trendy. I tell people, ‘your fixed assets are the things you want to love forever; other things you can change as needed.’”

The hardwood flooring throughout anchors their look of casual elegance. Their original choice was a very dark wood, but a slightly lighter wood made the cut and they’re so pleased with the result. They selected three inch red oak in a saddle color. “We went with three inch, which is the new two and a quarter that you’ll see a lot of Shandon houses have,” Ginger said. A popular choice today is a five inch wood, so to be not on trend, the choice was the three inch wood.

The living room has a very cool palette, with a mixture of antiques and only one newer piece purchased locally. “Everything there we already had,” Ginger said. “We just recovered the sofa, which was my grandmother’s sofa, and it was corduroy red and no one wanted the sofa after she passed. I knew it was well made, so we are so pleased when family comes in and asks if that’s grandmama’s sofa since it looks so different.”

Moving onto the den, every piece is new, with the exception of the rocker. This space is traditional, with a nod to the restoration movement and Pottery Barn. It’s the casual, sit down, watch television room. The family gravitates towards the den and is very comfortable being here, where they can also enjoy the fireplace when the weather is chilly. Two sweet labrador retrievers live here, too, and this room is an area where they come in to be with the family.

When they visit Ginger’s family, Bo loves her father’s leather chair. For Bo, the one prerequisite for the den was an amazing leather chair, and the winner they brought home is buttery soft leather with an ottoman. The rugs are sisals, both in the den and living room.

Speaking of the den, “everything was earth tone initially and I knew we had to get some color in here,” Ginger explained. “Between Forest Lake Fabric and Fabric 101, we ended up with these great materials. Jo Ellen Coleman works at Forest Lake Fabrics and she did all the draperies and pillows in the house.”

For the artwork, Bo loves Lowcountry images, particularly Carolina marsh scenes. Local artist Cami Hutchinson created several oil paintings used in various rooms, including the living room and the den. Cami is based out of the Studio Carlisle off Millwood Avenue in Columbia. Another local artist, Chris Daniels, came to their home to get a head shot of the dogs and did portraits of them for Bo, which are prominently displayed.

In this open floorplan, the kitchen is directly across from the den. “The kitchen design, that’s both of us, completely,” Bo said. One of the most striking elements is the three dimensional basket weave backsplash. The couple incorporated complementary colors from the backsplash tile and added a different tile between the backsplash and the countertop for a more interesting look. “We love the kitchen, but we’re not big cooks,” Bo commented. “We grill a lot more than getting too clever in there.”

“I had it my mind I wanted white cabinetry and luckily the ones I wanted were discontinued.” Ginger said. “I helped my mom with her kitchen remodel and saw everyone doing the off white cabinets with glass, which is timeless, but the dark cabinets are a nice rich look that we like much better.” The kitchen is stocked with stainless appliances, a gas cooktop, undermount sink, lighted upper cabinets and a nice hood. Oil rubbed bronze fixtures are used through the entire house.

The pendants over the island are interesting. She was going for a Charleston style, so the light fixtures are all from similar collections with seeded glass.

The house feels friendly. “It’s one of those houses where we want it to be easy and not get too stressed about little things. With a husband and two dogs, you have to be a little more chilled out,” Ginger said. Bo agreed, adding, “The things she hates to do in the house, I like doing. It works out that we are a perfect complement to one another and the house setup makes it easy to do what we need.”

Between the kitchen and the dining room is a butler’s pantry. Not found in your everday modern floorplan, for the Gdovins it was a must have. “My mom always wanted one and she didn’t have one. When you are entertaining and using the formals, it’s great to put beverages there and stage your next course,” Ginger said.

On the other side of the kitchen, they created an eat-in space. It’s used for more casual dining with friends or just Sunday dinner.

The master bedroom is on the main floor and boasts a dramatic coffered ceiling. A lot of the pieces are new. “We’ve been married three years, so we thought let’s get our furniture, not just have something that was his and was mine,” she said. They purchased the bed and already had the slip covered chairs. When Ginger was selecting the rug for this room, she chose one she really liked, not realizing it was a perfect match to the wall color in the master bedroom. Again, she is coordinating without realizing it. Her design background guides her choices, creating a beautiful home in the process.