When it was announced that the 12th annual Girls Night Out fashion show to benefit Edventure Children's Museum (sponsored by Coplon's) would feature Yigal Azrouel designs exclusively, the buzz began. Then came the second announcement: the man behind the brand would be here. 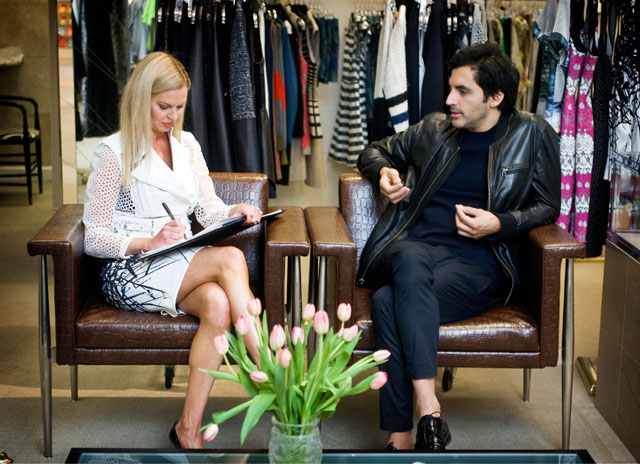 It was difficult to distinguish if the excitement was more from meeting him or seeing his Fall 2014 collection, fresh off the runway from Paris Fashion Week. When Bruce Greenberg, the owner of Coplon's, called me and asked if I wanted the exclusive interview with Yigal, I was elated to have the opportunity to sit down with one of my favorite designers.

As I prepared, I began to think about Yigal the man:  41 years of age, single and gorgeous – and yet he’s remained a mystery to most of the world since he launched his line at the age of 27.

Yigal, a New York based fashion designer who was born in Tel Aviv, Israel and is of French-Moroccan descent, has been rocking the fashion world since starting his own line in 1998. Yigal is best known for his feminine designs and expert draping. Many fashion critics have referred to Mr. Azrouel’s Fall 2014 collection as a "celebration of dimension" which I personally think describes him perfectly as a designer.

Pleats, textures (including nubby boucle knit, mohair, lambskin and leather) and geometric prints were all included in this collection. The colors were subdued neutrals ... think gray, black and a hint of navy.

And so the day arrived. On March 20, 2014 you would have believed that you were in New York for Fashion Week as 20 models wearing his designs descended the runway under a tent in Columbia.

The morning of the interview I dressed in a Yigal skirt and jacket, grabbed my notebook and headed out the door to interview him. And then, anxiety set in. I arrived a few minutes early in anticipation of Mr. Azrouel's arrival and as my photographer, Anne McQuary, was setting up, I looked over at her and shared my sudden attack of nerves. Just as Anne looked back at me and replied, "You've got this Lisa, you’re a pro," he casually strolled in, looking more handsome than in his photographs.

I walked over to introduce myself and as we shook hands, he looked in my eyes and said, "Let’s sit and talk."  He immediately put me at ease with his casual demeanor, and over the course of the hour that we spent together I was able to see that this gloriously talented man was even more beautiful on the inside.

As the models started coming in for their fittings I observed Yigal asking each woman if they were comfortable walking the runway in what he had chosen for them. Understand that this is atypical of most designers; but for Yigal, how the models felt was clearly important.

I hugged Yigal goodbye and turned to walk out the door when he said, "Lisa, thank you for making my clothes look so beautiful." To which I responded, "No, thank you for designing clothes that make me feel so beautiful."  I thought about the many times I slipped on a Yigal design and suddenly felt confident, powerful and a little bit sexy.  I left thinking that if charm is defined as, "the power or quality of pleasing," this was clearly one of the most charming men that I had ever met.

After the show, Yigal and his gorgeous assistant, Chelsea, came to my home for dinner with a few friends.  I saw him completely at ease mingling with my guests but my greatest pleasure was watching him and Chelsea rock out in our band room with my husband, Ben.  Yigal is a truly talented designer, gentleman and rock star all wrapped up in one handsome package.  Although it was his first time in South Carolina I hope he comes back soon because the South could use a little more of his type of charm.


LA:  You’ve said that you never thought you would be in the fashion business. I read that while in France you went to a Dior show with a friend and your passion for design took off from there?

YA:  Yes, I was 20 at the time. Gianfranco Ferre was the head of Dior. The energy and excitement was amazing; I enjoyed the entire experience.

LA:  I heard that you started designing by deconstructing vintage pieces for friends?

YA:  Yes, that is true. I would go to flea markets and bring home vintage pieces and take them completely apart. Then, I would create something totally different. I loved doing it and my friends enjoyed wearing my designs.

LA:  You were born and raised in Israel. What made you decide to move to the United States?

YA:  I came to the United States to visit my sister and really liked it. I decided to move to New York and live with a friend of mine.

YA:  I could not find a job.  No one would hire me.  I saved a few thousand dollars and went down to the Design District and purchased some fabric.  I just started designing and put together my first collection. It was all black (actually my first two collections were all black). I presented it to Barney's and they picked up my line.

LA:  I understand that you have no formal training in fashion, which is a testament to your unique and incredible talent.  When and how did you realize that this was what you wanted to do and that you had such a natural ability?

YA: It came about organically. I believe that every person has a job in this life – this is my calling – it is my passion and love.

LA:  You were inducted into the CFDA* in 2004, which is an enormous honor. What was that like/how did it feel?

YA:  It was great. It wasn't something I was chasing. I felt honored and I love the support of the fashion community and other American designers.
(design:  put at bottom of column in small type where the asterisk appears above.)
*Council of Fashion Designers of America

LA:  Your designs are a balance of strength and femininity. That juxtaposition is a hard balance to achieve. You were once quoted as saying, "I'm designing for real women; not models and celebrities."  Define the Yigal woman.

YA: The Yigal woman is feminine and confident. I don't love designs that are overly fussy or overtly sexy. My designs are minimalistic and modern, with just enough sex appeal. The reality though is that it is all about the energy the person wearing the clothing exudes. I love to dress real women and it is exciting to see them wear my designs.

I was once invited by a friend to a luncheon at Gwyneth Paltrow's house in the Hamptons. When I was introduced to her she asked me what I did and told her I was a fashion designer and she said ‘tell me your name again’ so I did.  A while later she came back and said, "Come with me." We went down the hall to her closet and she said, "I just got it."   She then proceeded to start pulling out all of the pieces that she owned that I had designed. I was very flattered but I don't design with that in mind.

YA:  I don't really have a muse except perhaps the French musician Francois Hardy.  I grew up listening to her music and attending her concerts.  She was and still is gorgeous to me.  Francois reminded me of myself; she loves her privacy and is not looking to be in the spotlight all the time.  She lives her own life in her own way and I admire that about her.

YA:  Yes that is true. My flagship store is on Madison Avenue and the production facility is in the Garment District.
I love and am involved with every detail of production.

LA:  Two of the things that I admire about your line are the consistency of quality and sizing. Tell me about how you do this?

YA:   I am involved with every detail of the design process. I don't know where I am going when I start the process of designing a new collection. I usually start by picking out the highest quality fabrics and then I move into shape. In the end, it's really about the juxtaposition of hard and soft; refined and sexy, I just know when it feels right.

With regard to the consistency of the sizing, I have used the same sample model for 8 years and it is amazing because her body never changes.

LA:  You have collaborated with Dror Benshetrit, a childhood friend, on quite a few projects.  I understand that he is an architect; tell me about your relationship.

YA:  Yes, Dror is amazing. He's a little out there so I guess we speak the same language.  I love collaborating with him because I admire him so much.  He designed my first boutique in the Meatpacking District back in 2003.  We also collaborated on the design of my house in Costa Rica.

LA:  Tell me about the collection and show that you did at your boutique that Dror was involved with, based on the infamous "imperfect vase" which he designed?

YA:  Ah ... the imperfect vase. The vase is about transformation and contrast.  One side is smooth and perfect and the other side nearly destroyed. I believe that beauty comes from experience; when you look in someone's eyes and can see that they went through something, it makes them all the more beautiful.

The show was very untraditional; it was at my old boutique and the models were seated in chairs.  The hair and makeup was very Dior fifties.  We even used Polaroid photos.

LA:  You started showing internationally in 2004.  How many shows are you currently doing around the world?

YA:  I'm currently just showing in New York and Paris, which is the major place to show for the European markets.

LA:  I love that you use convertible zippers in many of your pieces that double the functionality, which I understand as I own a few of those jackets myself. Tell me how that came about?

YA:  It is so versatile you get two looks in one.

LA:  You are the youngest of eight children and you have five older sisters?  Do you feel that growing up with that much female energy in your family inspired your designs?

YA:  I am sure it has subconsciously, but I have never really thought about it as a direct connection.

LA:  Do you really surf or is that just a rumor?

YA:  Yes, I really surf!  Surfing is my other passion.  I particularly love nighttime surfing.  There are only a few beaches in the world that you can do that and one is back home in Israel. (put dingbat here)

Author’s note: In South Carolina, Yigal Azrouel designs are only available at Coplon's in Columbia.

And so a remarkable encounter came to an end.  The fashion show was wildly successful, and the man behind the designs was charming and accessible.  Columbia entertained a legend in the design world, and proceeds from Girls Night Out benefited the Yes, Every Child Fund, EdVenture’s commitment to providing underserved families with access to the joy of learning at EdVenture for only $1 per person. And my nerves?  They disappeared the moment he walked in the door and began to share his story.