From the museums to the scrubbed and polished historical elements, this city is visit-worthy year round. 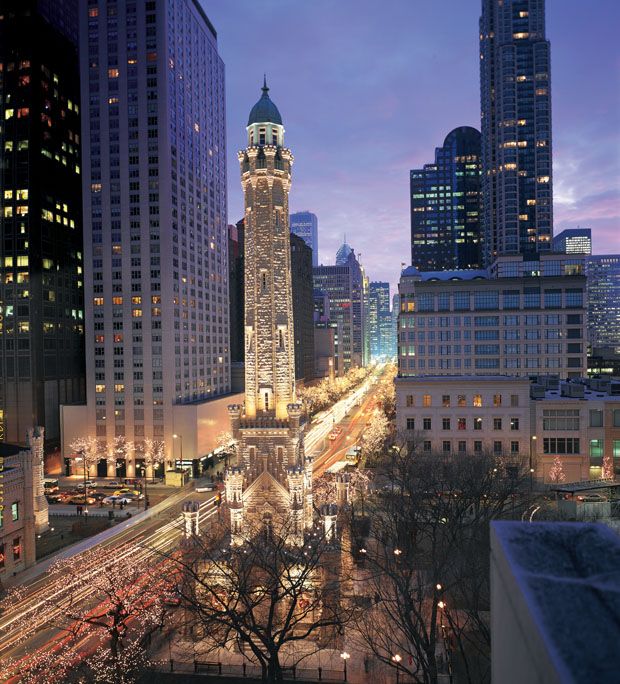 Stepping off the elevator on the mezzanine level at the Palmer House Hilton hotel, the first thing I notice is a man playing classical music on a glossy black grand piano. I’m there to meet someone, but not a piano player. “I’m not who you think I am,” he says, rising and introducing himself. Turns out he he’s exactly who I think he is: Ken Price, hotel historian, sometime piano player and jokester. Days later--as I replay the scene in my head--I realize that his comment had perfectly described Chicago.

Where I had expected the rushed, electrifying vibe of New York, I instead discovered a city with its own swagger: not only is this not New York, it doesn’t want to be.

The Palmer House Hilton is a great example. Instead of stripping the original Empire details from the hotel’s heyday, they’ve been scrubbed and polished (including each of the 180,000 jewels that hang from the hotel’s vintage French chandeliers), a celebration of craftsmanship and decades-old style. Framed black-and-white-photographs of every celebrity who has ever stayed in the hotel line the hallways and there’s a small but fascinating hotel museum tucked into a corner of the mezzanine.

Open only by appointment, it’s filled with memorabilia including old menus and books, loads of photographs and pieces of twisted ironwork from the first Palmer House, which was destroyed by the Great Chicago Fire of 1871. Price presides over the collection, using it as a jumping-off point for his behind-the-scenes history tours, which include a trip into a subterranean vault filled with hundreds of place settings of 19th-century Limoges China.

After a brownie break—the fudgy squares were invented here for the Columbian Expo in 1893--the tour ends with the history of the massive fresco that covers the entire ceiling of the hotel lobby. First painted at the turn of the century, its 21 panels and bas relief arches were fully restored in 1996 by Lido Lippi, who had also worked on the renovation of Michelangelo’s Sistine Chapel ceiling in Rome.

Fresh from a 2014 makeover, rooms set with velvet furnishings and heavy silk drapes feel like glamorous turn-of-the-century salons. But they’re not trapped in a time warp, thanks to modern amenities like flat screen televisions, free wi-fi and spa showers.

The Art Institute of Chicago celebrates its Chicago-ness by giving clear credit for its world-renowned collection of Impressionist masterpieces to Bertha Honoree Palmer, philanthropist and wife of Potter Palmer, a wealthy financier who built the original Palmer House hotel.

The Palmers donated about 70 paintings from the likes of Claude Monet, Mary Cassatt and Edgar Degas to the museum, as well as dozens of other priceless paintings and sculptures. Today, those painting come to life in the gorgeous filtered natural light of the Palmer Gallery. There are so many of them that even I, an art novice, can see and appreciate the transformation of Claude Monet’s work from bold depictions of everyday life to the ethereal reflections captured in his later works.

The Art Institute of Chicago’s collection goes well beyond Impressionists, though. Masterpieces from Matisse, Picasso, El Greco and Marc Chagall astound with their vividness; America’s most famous one-hit-wonder, the mercurial American Gothic, is also on display. The stunning Renzo Piano-designed Modern Wing, which opened in 2009, is as much a piece of art as are the works within its walls; take it in from the inside, or join the Chicago Architecture Foundation for a docent-led tour that covers this and other design landmarks in the city.

Chicago’s most famous museum is the Field Museum of Natural History, a sprawling hulk of a place that covers 4.6 million years of history. Since she was unveiled in 2000, Sue, the largest and most complete T. rex ever found, has become a museum favorite; adults and older kids love the backstories, such as how she got her name (she was discovered by a female archaeologist named Sue).

Located on the same small peninsula are the Shedd Aquarium and the Adler Planetarium. The Shedd is home to a gigantic sawfish (go early to see this 14-foot-long living tool before he disappears for the day) and 30 penguins, who you touch and feed through the museum’s Extraordinary Experiences program. Renowned for being America’s first planetarium, the Adler pairs star viewing with the science of the solar system and beyond.

There are fascinating less-known museums as well, including the creepy-but-interesting International Museum of Surgical Science; the Money Museum, where you can buy a bag of shredded cash; the Pritzker Military Museum (don’t miss the training manual illustrated by Dr. Seuss); and the Chicago History Museum, which offers walking tours of the city.

But you don’t need a tour guide to take in the city’s unique character. Along Michigan Avenue’s Miracle Mile shopping district, luxury retailers like Neiman Marcus, Saks Fifth Avenue and Barney’s line the street--but step off the main drag and a different city emerges. Gino’s East, the famous graffiti-clad pizzeria that puts the cheese on first is just around the corner; two blocks away, an auto-repair shop and a McDonald’s, complete with a drive-through, preside over their wide avenues. Of course, Chicago’s dining scene is a long way from fast-food hamburgers and deep-dish pizza. Anchored by West Randolph Street, the trendy West Loop neighborhood is filled with foodie favorites like The Girl and the Goat, the Publican and Blackbird, along with cool newcomers such as Maude’s Liquor Bar, Graham Elliott Bistro and Belly Q. Closer in, Acanto serves some of Chicago’s best cheese in an amber-hued space across from the Art Institute; dinner at Park Grill comes with a view of skaters twirling, jumping and only occasionally wiping out at Millennium Park’s outdoor ice rink.

Early spring may seem an odd time to visit windy, cold Chicago, but, after visiting in January, I’ll come back any season. Chicagoans take their winters in stride, daring you to do the same. Once I got over being seen with hat hair (everyone has it), wearing chunky boots (everyone does it) and covering myself in so many layers that no amount of arctic air could slip in, I joined the crowd of similarly-dressed explorers and discovered a city full of surprises.