Just off I-26, this new steak house has an urban vibe and a menu to match 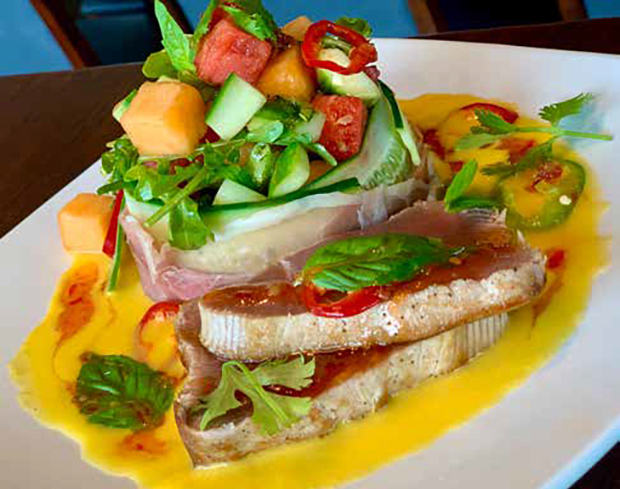 Although their steak program is their shining star, there are other dishes that have a devoted following with nary a moo in sight.

First, the beef, cut by the butcher on their culinary team, is handled in house.  There’s an aging room where the steaks are dry aged and there are other options, including tallow-aged steaks.  The 8-ounce filet mignon is their most popular dish, but there are fans of the tallow-aged ribeye, as well as the 48-oz Tomahawk, so named for its hatchet-like appearance on the plate. And for non-beef eaters, the fresh catch or blackened salmon is utter bliss.

For corporate chef Ed DeFelice, it’s all about the flavor, no matter what’s on the plate.  “I work really hard to bring a high-level culinary experience to those who dine here,” he said.  All selections on the menu are carefully curated – always building layers of flavor to create umami, the flavor that food experts describe as savory, rich and, to coin a phrase, yummy.

It’s not a simple taste, says Chef DeFelice and he should know.  Coming from an Italian-American family, he learned to create delicious dishes using local ingredients and old-world techniques.  His travels throughout Spain and Italy, plus time spent in New York, added to the culinary richness he draws from in creating new menu items.

For instance, when you go, consider the octo sauce if it’s available.  “It’s a complex, eight-ingredient Asian-inspired vinaigrette,” Chef DeFelice said.  Or what about their house-made smoked pimento cheese, containing several smoked cheeses and a healthy dose of that umami we’ve been talking about.

Every dish has layers of flavor.  For example, their fish and chips is made from fresh cod, adorned by house-made tartare sauce that includes tarragon and capers. And the organic airline chicken breast?   It’s a petit boneless breast, usually with wings included.  Could that baby fly?  It may well fly into your mouth, for sure.

Don’t ignore the sides as well.  My personal favorite are the Brussels sprouts (and I’m not usually a cruciferous kind of girl).  These have a hint of crispy sweetness and hold their own as a starter, or meal accompaniment. In fact, order the family sized portion to share, or else be prepared to guard your sprouts with fork in hand.

There are a variety of sauces available for the meats, with the hands-down favorite being the Chophouse Steak Sauce, Chef DeFelice’s creation inspired by Peter Luger Steak House sauce, which has been rated the top steak house in New York since 1984 according to their website, and has a Michelin star. 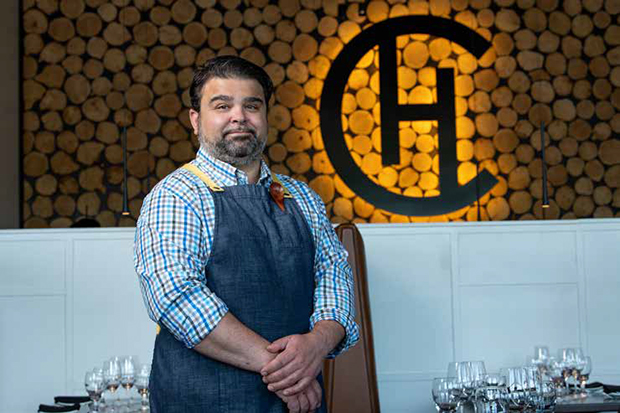 But what’s the chef’s favorite dish?  “That’s hard because I like them all but if I had to choose it would be the pork chop,” he said.  Perhaps that’s partially because of the accoutrements that accompany said pork, including smoked root vegetable hash, Applewood bacon, Swiss chard and blue-cheese chive butter.

Scrumptious-looking desserts are available.  One of the more unusual options is the blueberry flapjack cake, with maple syrup icing.

There are wine specials, half-priced bottles of wine every day during happy hour and themed dinners every month.  During May, there will be a special Saki dinner, and a Mother’s Day celebration.

They support local farmers as well as area charities and service organizations. It’s run under the umbrella of Happy Fork Hospitality Group who is developing food experiences for a variety of projects, including Deka Dessert Bar, the source of that flapjack cake. It’s next door to the Chophouse and also available for a desserts-only experience.  There’s outdoor seating as well, which means a well-behaved Lassie can be part of the al fresco dining party.

What’s on the menu for summer?  That’s in the works, but Chef DeFelice says his dishes may well include the fresh fruits and vegetables of the season, enhanced by herbs and spices and always, always curated to include the deliciousness of umami. g