A local writer shares how he discovered his passion and what it took to bring it to fruition. 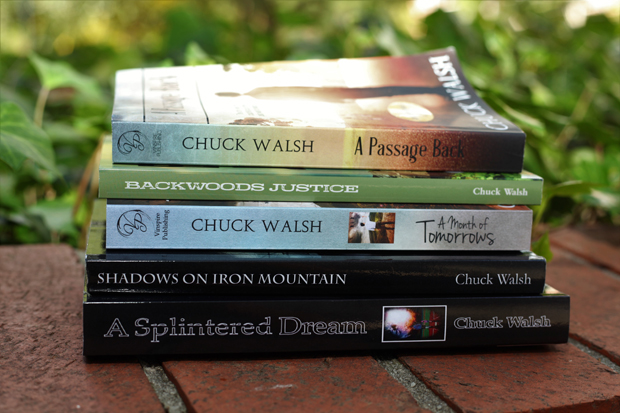 As a computer network administrator, Chuck Walsh might have been regarded as a man of few words, at least on the literary front. The sad news he received about his mother, however, soon changed that, revealing a gift he didn’t know he possessed.

“In 2003, when my mother was diagnosed with breast cancer, I wanted to write something to express how much I loved her and what she meant to me,” Walsh explained.

Walsh, a USC graduate, who now has an impressive five published books to his credit, had never written anything of a creative nature except for some poetry for his wife and some limericks for his children. The tribute to his mother, “A Passage Back,” unleashed a passion for writing that blossomed into an expanding creation of literature. “It was as if a light came on and my purpose had been unveiled,” he explained.

What began as a celebration of his mother’s life became the impetus for the next chapter in his own life.  With the encouragement of his wife, Sandy, he gave up a career position to devote himself to what he discovered was his true calling. While the decision required discipline, his creative spirit was stirred and the ideas continued to flow, inspired by his sense of family and place and his search for meaning.

He honed his craft by writing magazine articles and co-authoring a nonfiction book, “Faces of Freedom,” a collection of heart-wrenching stories of fallen soldiers from each of the 50 states who died in either Iraq or Afghanistan.

Inspiration for his books are heavily fueled by family members and their roots in the mountains of Tennessee. The Word War II experiences of his uncle, Rubin Stout, was the basis of his second book of fiction, “A Month of Tomorrows.”

“Writing books with settings that have influenced me since childhood allows me to take the reader metaphorically by the hand into those settings,” he said.

Like acclaimed Pulitzer Prize winner Cormac McCarthy, the writer he most admires, Walsh finds the haunting allure of Appalachia to be a rich mine for the setting of his mystery novels, “Shadows on Iron Mountain” and “Backwoods Justice,” in which killers roam the backwoods.

Of McCarthy, author of “All the Pretty Horses,” “Blood Meridian,” “Child of God” and “No Country for Old Men,” among others, Walsh said, “I believe he’s the best writer, bar none, and whenever I read his works, it fuels me to be the absolute best I can be, to make my books more than just a story and one that readers don’t want to end.”

While ideas for novels might come easily to him, Walsh allows that the regimen is demanding and requires discipline. “Every sentence, paragraph, page, and chapter I write is a constant challenge to create in a manner that will be descriptive, fluid, creative, interesting and realistic. I spend about two years on each book and I agonize over when I can truly consider each a finished work. Each time to go over my work is another chance to make it better,” he said.

As his quest for perfection continues, so do the number of projects on the horizon. He signed a contract for his sixth book, “Black Mingo Creek,” a mystery set in South Carolina, which will be released in the spring of 2018. He is currently working on “Jakob’s Well,” returning once again to the mountains of East Tennessee for the story’s setting. Walsh is also venturing into bringing his books to life on the silver screen. “I have teamed with a screenwriter to develop a movie script for ‘A Month of Tomorrows,’” he said, adding that the experience is exciting, but quite different from writing a book.

None of his productive output would be possible without the encouragement of a supportive spouse, Walsh allows. “I couldn’t have written six novels without the love and support of my wife, Sandy. She had faith in me even when I had some doubts about whether I would ever become a published author.

“She also is the first to let me know if something I’ve written isn’t up to par. She’s a tough editor,” he said fondly with a smile. While he gives Sandy credit, the ultimate thanks goes to a higher power. “I truly believe my unveiled writing talents are God-given. If you don’t think so, ask my high school friends. I’m the last person they ever thought would turn out to be an author.”

For aspiring writers, the now seasoned author has words of advice. “If you have a book you want to write, even if it’s just an idea, start putting the idea down in words. And as ideas, characters, and scenes come to mind, continue writing and continue building.

“From there, let it grow and develop. No matter how exciting creating the book is, the importance of editing and re-editing can never be understated,” he added. “It is crucial to develop and shape the story. Even if you go over the book a thousand times, you might want to think about going over it a thousand and one times. Also, remove yourself from the book from time to time. Get away from it and then come back to it with a fresh mind.”

The energetic and athletic Walsh, a former baseball player himself, often finds himself taking a lengthy jog, frequently returning with a fresh take on an idea or direction for his next scene, chapter, or book.

When the multi-faceted Walsh is not focused on a current project or out on a run, he might be found in the family kitchen, turning out a gourmet meal. He can also be spotted in the Columbia College library where he runs the information technology help desk.

His books are available at Amazon, the Apple Store, barnesandnoble.com, Kobo, Smashwords and soon, in Barnes & Noble retail stores. “A Month of Tomorrows” is also available in audio at audible.com.