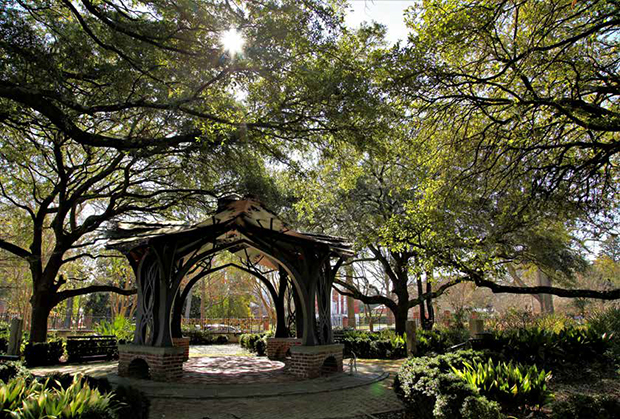 On the meandering paths of Historic Columbia’s gardens at Hampton-Preston Mansion, Horticulturist Keith Mearns points to blooming daffodils, fragrant paper bush shrubs, and potted heirloom roses ready for planting. He pauses to cordially welcome a wedding planner who wants a closer look at the greenhouse for a spring reception.

Under his appreciative and enthusiastic eye, the greenhouse is receiving its finishing touches before an official opening on March 13. This major event comes as Mearns himself has received outstanding recognition as the recipient of the prestigious 2021 Emerging Horticultural Professional Award bestowed by the American Horticultural Society.

“This is a well-deserved recognition for Keith who has worked to institute deep and lasting changes to the landscapes at Historic Columbia,” said Robin Waites, executive director of Historic Columbia. “His vision for the properties goes well-beyond beautification. He uses the sites to build on and highlight the legacies of those who worked these grounds long before him.”

Since his arrival at Historic Columbia, Mearns has demonstrated he is a richly gifted professional whose expert plant knowledge and superior interpersonal skills have led to advancements in the organization’s work to become regionally recognized as a leader in horticultural stewardship and education, she added.

The newly constructed greenhouse, situated on the corner behind the early blossoms, is his current pride and joy. The new building features a three-quarter span glasshouse running the entire length of the structure and includes a production greenhouse, a central orientation lobby, and an interpretive greenhouse. It will serve as a hub for horticultural research and plant propagation, along with interpretation and programming.

The state-of-the-art greenhouse and gatehouse, renditions based on structures and features that once graced the grounds, are the latest in a long line of enhancements funded through the Darnall W. and Susan F. Boyd Foundation. Over the last five years, the foundation has given a total of almost $5 million to the HCF, including $3 million for the greenhouse and gatehouse projects.

Mearns says, “It’s hard to accurately capture what the completion of this glasshouse and nursery mean for the future of Historic Columbia horticulture. In addition to rounding out the historic interpretation of the Hampton-Preston sites, these spaces will substantially increase our capacity in several areas. They will support our existing plantings through germplasm redundancy, increase more extensive selections in our plant sales, and expand more regular and varied public programs.” 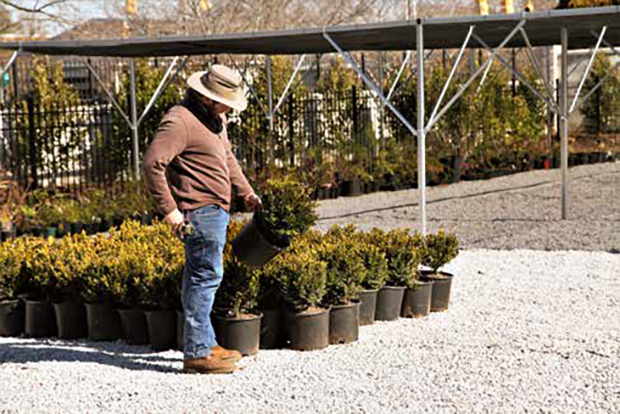 Everywhere Mearns and his visitors look, there are extensive plantings under his expert care. As HC director of grounds, Mearns manages the gardens on all six of Historic Columbia’s properties, which include the Hampton-Preston Mansion, the Robert Mills House, the Mann-Simons Site, the Modjeska Simkins House, Seibels House, and the Museum of the Reconstruction Era at the Woodrow Wilson Family Home.

While he has always enjoyed plants, Mearns first began working in the field while he was a student at USC in the A.C. Moore Herbarium. Summers brought an opportunity to work with certified organic farmers Rodger and Karen Winn’s at their heirloom variety farm in Little Mountain.

“These two immersive pursuits gave me a very wide appreciation and understanding of the relationships between people and plants.” He and his wife, Jessica, also treasured visits to Thomas Jefferson’s Monticello for the annual Heritage Harvest Festivals there, cementing his interest in historic horticulture.

After college, Mearns gained valuable experience at Riverbanks Botanical Garden before joining HC initially as a horticulturist in 2015 and being promoted to director of grounds in 2019. He’s responsible for the maintenance, planting, and development of the grounds, as well as maintaining the first publicly accessible online plant database in South Carolina. 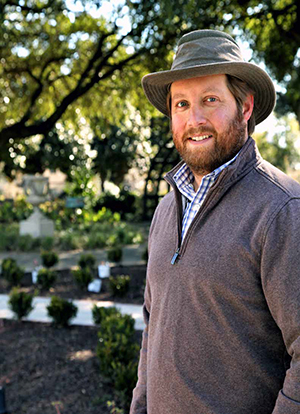 “I was very excited to join Historic Columbia at a time when they were beginning a new effort to renovate the gardens,” said Mearns. “I have been very fortunate to have met many incredible colleagues and gathered an exciting assemblage of plants on the properties.”

As a man for all seasons, Mearns launched HC's Garden Database. With detailed information about every plant at HC’s sites, the database represents a wide swath of the diverse flora native to South Carolina. Horticulture experts use it to track how plants are progressing. Patrons can also refer to it to learn which plants will be in bloom at a particular time for planning purposes.

Mearns likes to point out to patrons that plants found on the historic grounds will also flourish well inside their homes. “Houseplants both oxygenate and beautify our homes, but many people become bored with the limited selection of species sold as houseplants. As it turns out, some of the plants we grow outside here at Historic Columbia make great houseplants as well.”

For instance, he explains, “Cast Iron plants in the Aspidistra species are just as tough in your living room as they are under heavy shade in the garden, and there are many brightly marked species and varieties available. Flowering Maples, actually members of the Hibiscus family, are non-stop bloomers outside and in, and sport flowers in every color except blue, as long as they are placed in a bright spot in your home.”

So, during an upcoming visit, if gardeners ask the congenial Mearns which plant on the historic grounds might find a happy spot at their own homes, he may well point to a species that has been propagated in the new greenhouse nursery.