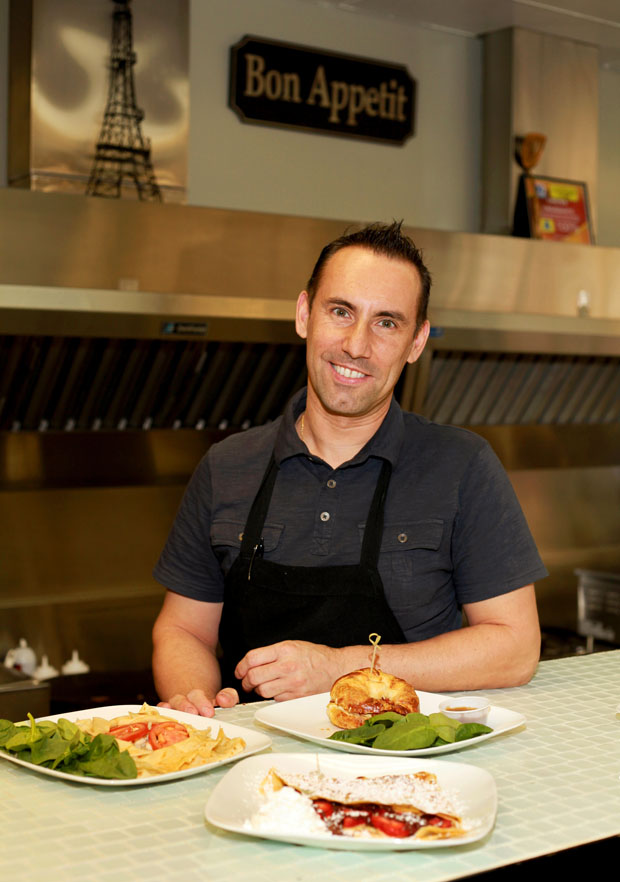 Tucked away on a side street in downtown Columbia you can find a little corner of France. Called Crêpes et Croissants, it’s an eatery as authentic as the Eiffel Tower.

Chef and owner Laurent Prescelti grew up in Marseilles in the south of France and first came to the U.S. at age 17 as an exchange student. Right away he was drawn to the American way of life, although the dream of coming here to live and opening a restaurant wouldn’t fully form in his consciousness for years. “Maybe one day, when I'm ready,” he told himself.

First he became a successful entrepreneur. He developed the expertise to implement solid business practices and manage a team. In 2009, he sold the small company he’d founded and set his sights on two goals: learning the art of making crêpes and bringing the flavors of his home country to a place of his own in the U.S.

A friend in Troy, N.Y., suggested Prescelti join him there but the northern clime did not appeal to the Frenchman. “I'm from ‘the South,’” he explained. Then, another friend mentioned Columbia and as luck would have it, this “Southerner” arrived for his visit to the capital city during one of its mildest winters. “It was 93 degrees in December, and just like being in the islands.” He saw himself driving around in a convertible and that’s when he knew: “This is going to be the place.”

With input from Columbia’s Center City Partnership, Prescelti selected a location on Sumter Street, just steps from the downtown revitalization that was taking place and centered on Main Street.

And so, determined to match the quality that diners would expect in France, he began offering the delectable “Crêpes et Croissants” from which the restaurant takes its name, along with pastries, quiches, sandwiches, salads, desserts – and coffee, French roast, of course.

It takes skill to make a perfect crêpe. It looks simple: Ladle the batter onto the hot griddle, spread it out, flip it over, and voilà! But it isn’t easy. Cooked too long, a crêpe will become tough; too little and it will be gummy. There’s very little margin for error, and that’s why chefs practice until they achieve perfection.

Crêpes can be prepared either sweet or savory, flavored with nothing more than a dusting of sugar or containing meats, cheeses, and vegetables. Simple spinach greens are all the accompaniment that’s needed, served with Prescelti’s own vinaigrette dressing that’s become so popular he’s had multiple requests to bottle and sell it.

The menu isn’t solely French, however, and the proprietor has boldly expanded its repertoire to include flavors from other countries. The “Norway” crêpe contains smoked salmon and sour cream, the “Italy” crêpe has basil-marinated chicken and mozzarella cheese, and there’s even a Texas-style crêpe filled with chili-spiced beef, cheddar and barbecue sauce.

Crêpes et Croissants offers plenty of vegetarian options, such as the “Provence” crêpe that contains the traditional ratatouille made from squash, onions, eggplant, and peppers (according to a recipe from the chef’s mother, who still lives in France). One of the most popular dishes is the “Greek” crêpe, and it’s one of the least elaborate, with nothing more than warm greens, soft goat cheese, and a drizzle of honey. On a recent visit, one customer nearly swooned with pleasure when she learned there are also gluten-free options available, using buckwheat flour, which makes the dish officially called a galette. But nothing tops the #1 best-selling crêpe of all, the “Triple Threat.” With fresh strawberries, bananas, chocolate-hazelnut Nutella spread, and topped with whipped cream, it’s an absolute indulgence.

Savory sandwiches are as varied as the crêpes, although it’s hard to find one that can compete with an unadorned chocolate croissant. It has a buttery warmth customers can smell every morning when entering the restaurant. For diners in a hurry there are Grab ‘n’ Go sandwich or quiche combos, made extra enjoyable with dessert choices that include a house-made chocolate mousse or crème brûlée. All of the baked goods are made on the premises by the owner, assisted by a small staff of four.

Charcuterie plates of cured meats and cheeses are appearing on more and more menus in the U.S. However, there aren’t many sources for true, French saucisson sausages and pâtés, so Prescelti works with carefully selected importers. Continuing the theme of the country’s tastes and aromas, there’s even a small display of French-inspired products, including lavender honey and thyme-scented candles, placed near the entrance and made by local purveyors.

Originally just open for breakfast, brunch, and lunch, the restaurateur is implementing plans to open for dinner service as well. Enthusiastic response to a Valentine’s Day-themed dinner he hosted confirmed that patrons would be eager to attend evening meals. That menu will feature such traditional fare as Coq au Vin and Beef Bourguignon.

Asked about possible plans for expansion, Prescelti says he’s considering opening another location that would bring the crêperie experience to people who live in the city’s suburbs and may not often visit downtown. More immediately, he’s putting down roots by taking part in civic events such as the First Thursdays on Main arts collaborations and the Soda City Market that brings fresh produce to shoppers on Saturday mornings. Those who may be wondering exactly how a crêpe chef participates in these outdoor gatherings will be delighted to know that crêpes can be made mobile. With a portable propane rig, the chef can turn out the tasty pastries almost as fast as people can devour them. In fact, you can rent this self-professed “crêpe guy” for your own party. “I want to be involved in the things that are going on. I want people to know me,” he says.

Restaurant owners rarely take time off, and Prescelti’s parents and two brothers still reside in France. He hasn’t gone back to see them since he made the move to Columbia, so his family comes here when they can. They understand the dedication that the work requires. So when the mother of the “crêpe guy” comes to visit her son, she does what mothers in France and all over the world have done for generations: She gets into the kitchen and helps with the cooking.