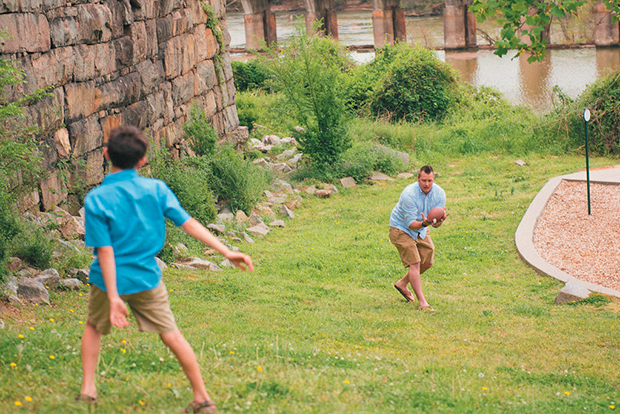 Local father, Jonathon, became involved with Midlands Fatherhood Coalition about a year ago after he learned about the organization through friends. Jonathon is an Army veteran and retired in 2013 after 11 years of service and two combat tours in Iraq. He was hit by 4 improvised explosive devices (IEDs) in 2006 and lives with Post Traumatic Stress Disorder (PTSD) as a result. When he returned home from the Army, he was suddenly faced with single fatherhood to a three-year-old son.

“I embraced the challenge,” Jonathon said. “I single-parented my son for seven years, then suddenly his mother came back into the picture. There were some issues, and the court system became involved.” That’s when Jonathon turned to Midlands Fatherhood for guidance.

Midlands Fatherhood Coalition is a state-wide organization, governed by the South Carolina Assembly for Fathers and Families, serving all of the Midlands with offices in Columbia, Lexington, and Sumter. The organization strives to help fathers realize the important contributions they can make in their children’s lives. Research shows, for example, that when fathers are involved, their children are 2 times more likely to go to college, 80% less likely to spend time in jail, and 75% less likely to experience teen pregnancy. Conversely, children in father-absent homes account for 71% of all high school dropouts, 90% of homeless and runaway children, and 63% of youth suicides.

“When a guy comes to us there is typically some issue that’s come up around parenting whether that’s access to the child, wanting to be a better father, or maybe it’s a guy who is having issues co-parenting. Maybe he is a non-custodial father who is trying to find a better way to navigate the relationship he has with his child’s mother. There are organizations all over the place for mothers, but historically there haven’t been a lot of non-judgmental places for men to go. We are the place for the guy who wants to become more involved or a better dad. Some individuals are court-ordered to the program, but those numbers are far less than those who voluntarily come on their own. And even the court-ordered guys have to fit our profile. They have to have shown some commitment to being a father. If a guy comes to us, he is going to want to be there.”

Their 24-week fatherhood program is free of charge and takes a comprehensive approach to helping men become the best fathers they can be. There is also one-on-one coaching that helps each participant overcome his unique obstacles. Core content areas include:

Fathers build relationship skills that can improve life for their children and themselves.

Fathers learn how to co-parent and have positive roles in children’s lives – from providing structure and stability to establishing paternity and visitation rights.

Fathers learn how to manage their own physical and mental health, so they can thrive and model healthy behaviors for their children.


Jonathon feels the program helped to round him out as a parent and that he especially benefited from the Healthy Relationships classes. “We delved into how to co-parent, how to better deal with the other parent, the differences between men and women, and how to better handle conflict,” he said. While his son is now in the mother’s custody, Jonathon enjoys a continued and close relationship with him. “I was on the phone with him one night and he was unusually quiet, so I asked him, ‘What was your favorite part about today?’ and it just opened the floodgates. I was shocked when he talked my ear off for about 20 – 30 minutes. I learned that parenting tip – to ask that specific question – at Midlands Fatherhood.”

There are a variety of ways to support the mission of Midlands Fatherhood. Visit their website, midlandsfathers.com, for additional information.