The USC Women’s Basketball Coach has a vision for her team and a methodology that makes it happen. 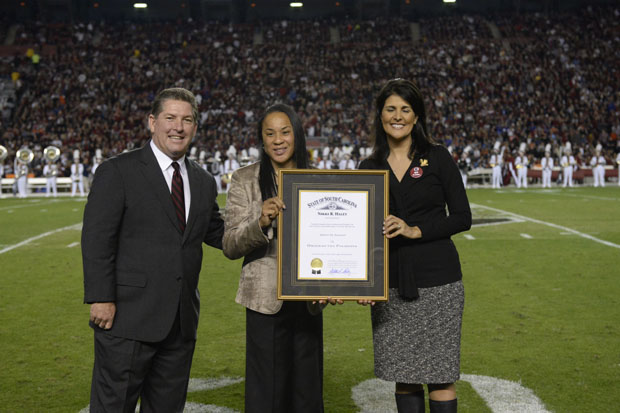 She is professional, personable, and elegant. Whether wearing a comfy sweat suit or a glitzy black dress, Dawn Staley makes a statement when she walks into a room or onto the basketball court.

She exhibits an enviable confidence; proffers an engaging personality. With Staley, the ambiance is casual, the conversation informal. You want to get to know her. Coach of the University of South Carolina Women’s Basketball Team, Staley attracts accolades from her players and the writers who cover them.

“She’s terrific. I would rate her as one of the best in the country,” says Dave Cloninger who covers USC Women’s Basketball for [The State] newspaper in Columbia. “She knows what buttons to push while still keeping that player in a family atmosphere. I think it’s just what she went through growing up. “

Once a player, now a coach

For Staley, the honors date to her days as a basketball player. It began with her being named USA Today's National High School Player of the year in 1988 as a senior at Dobbins Tech. On the international scene, Staley made her first appearance in a USA Basketball uniform as a member of the 1989 Junior World Championship Team.

She continued to four years with the University of Virginia in a college career including three trips to the NCAA Final Four, including a championship game appearance in 1991 after which she was named Most Outstanding Player.

She ended her college career as the only player in ACC history to record more than 2,000 points, 700 rebounds, 700 assists and 400 steals, One of three players at Virginia to have her jersey retired, Staley was named to the ACC's 50th Anniversary Women's Basketball Team in 2002 and earned a spot on ESPN.com's "Top Players of the Past 25 Years." In April 2008, she was inducted into the Virginia Sports Hall of Fame.

She expects the best from the women she recruits to Carolina’s team. “It’s not going to be easy,” she says she would tell a prospective player. “She’ll be disciplined in everything she does: whether that’s academics, whether that’s socially, whether that’s athletics. “

Staley’s drive for perfection and competitive spirit are contagious. “Failure is the thing I’m fueled by. Failing is the thing I don’t want to know,” she says. “There are too many people that I am responsible for. If I fail, I’m failing other people. That’s what drives me. That’s what fuels me. That’s the thing that creates the chip on my shoulder when it comes to that. It makes me become a deeper thinker.

“Sometimes we can be surface thinkers. There are certain things that people will bring out that will make you go a little bit deeper to figure things out. When you do that, it becomes more meaningful when you are successful.

Her life revolves around overcoming obstacles and always pushing. In a tough game against Duke this month (in December), Staley’s hard work in recruiting paid off when A’ja Wilson took the Gamecocks to a 51-50 win over No. 9 Duke in the last 1.8 seconds of play. In his game story, Cloninger wrote that Wilson relied on “the instinct and game that made her the country’s No. 1 prospect.

No. 22 Wilson credits Staley for always challenging her to do better than her best. “Her drive, everything she does, just her demeanor, the way she carries herself really kind of connect me with her,” Wilson says. “She always is pushing me to go harder, pushing me to do more always pushing me outside that limit, my comfort zone, and really kind of making me work hard.”

When she visited Carolina, Wilson says what “really stood out the most is that Coach Staley and Coach [Nikki] McCray have been through the things that I want to go through. The goals I want to set and achieve, they’ve been through it. What is better than to be coached by a person who has been through it? So that drew my attention here. Really the girls, the team, the support system are all amazing. These girls are like my sisters.”

“I am driven, “ Staley says. So the she keeps pushing herself and her players to loftier goals.

First there was last year’s Southeastern Conference Championship, something that seemed impossible when Staley first took over at USC in May 2008. Not everyone had a favorable view of that move – which took the coach from successful work with the Temple University’s women’s team to Columbia. Here, women’s basketball – though growing in popularity – remained something of an unpredictable quantity in terms of the team’s fan base and the program’s success.

It started slowly, but Staley soon forever altered USC’s sports landscape and the reputation of its women’s team. In 2008-2009, the Gamecocks earned three wins over nationally-ranked teams, lifting their SEC record to 7-9. Season 2011-2012 was one of major change as the Gamecocks’ success grew.

“We have a certain culture here that’s what we’re about. We are about doing the right things, the right way,” Staley says of USC Women’s Basketball. “ Sometimes it takes a young person awhile to learn if they haven’t had that at home or in their lives. Sometimes it’s hard for them. But they have to learn.

“We are disciplined about instilling that culture in our players. We feel like if you embrace it, you’re going to be tremendously successful.”

Staley’s vision and the family atmosphere of the team attracted senior Aleighsa Welch, No. 24 on the South Carolina roster. “I felt when I came on my visit. A big thing was, I just felt at home, even though I’m from right up the road, it is kind of like having a home away from home – the trust, the chemistry, believing in what she built, believing in her vision and gaining a great relationship with her and the coaching staff; knowing I could trust them and knowing they would help me become the best person I could be.”

Early on, Staley learned to rely heavily on herself and on the people who know her best. “My mother is my biggest advocate, critic, and all of the above. I know I can get the truth from her. She keeps me humble because she’s pretty frank about what she sees -- and what she doesn’t like. Sometimes she’s not only teaching me those lessons, she’s teaching the people around me those lessons.”

Staley doesn’t take it easy very often. Basketball – and family – seem to be her life. “I can relax. I’ll tell you one thing that somebody wouldn’t know about. It is on my bucket list to tour Air Force One.

I enjoy just being at home watching TV. I like “Scandal.” I like “Homeland” and I like “The Good Wife.” I guess it has to do with law, right?”

In her six years in Columbia, she’s been pleased to be closer to her relatives. “Since I’ve been in Columbia for the past six years, I do enjoy spending time with my family, my nieces and my nephews. I’ve been able to do that since we moved closer to some of my family … My brother actually came here 10 years before I moved here. And my sister lives in Raleigh. So I get to see them twice a month.”

Looking to the future, Staley confesses she follows her instincts, but keeps the final destination in mind. “I probably shouldn’t say this. I’ve never really had a five-year plan. I pretty much take life as it is and make it work. But I’m not against goal setting.

“There is a goal that I have in mind in my profession and that’s winning the national championship. But that’s not No. 1. No. 1 is being a dream merchant for our players.”