Sure, it is a journey. An around-the world journey through nature. This summer, plan your return visit to Riverbanks Zoo and Garden.  The flora and fauna are calling. 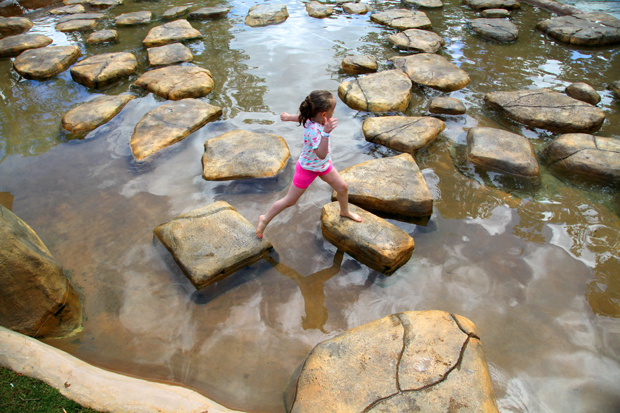 Great to Greater. Adding even more of a great thing, or, hey, make that Great Things, Riverbanks Zoo and Garden has now delivered on its latest promise to visitors and its host community – and especially to children. Its recently-added adventures assert that Destination Riverbanks has been newly defined and, the quick spelling is F U N.

So the excitement of these much-anticipated new features could be spread throughout the coming months, zoo officials opened them in stages.

The rolling, rollicking “Yeah!” still echoing through the sprawling, award-winning property began last year when the fun-seeking public was first introduced to two new exhibits that added a couple of very popular addresses to the zoo property. Grizzly Ridge is home to two bear brothers. At a neighboring habitat, Otter Run, visitors can catch the playful antics of two females, also siblings.

The newness of the brand new wet and lofty (25-foot high) feature found at Waterfall Junction. was still the buzz among families – both local and those passing through town - when Sea Lion Landing opened, about the same time midlands schools began dismissing students for summer vacation.

Zoo animals set the examples for how one can play for days on end, and those examples are amplified throughout the interactive, three-acre adventure spaces now drawing curious visitors in droves.

Anyone who has visited Riverbanks in the past knows full well the entire park is for children. Who gets to be counted as a child comes with a bit of mathematical magic and some time-travel because everyone who comes through the portals there is, abracadabra, once again a child (even if they are really, currently a child.)

Beyond the reception station, a meandering pathway leads to a dizzying number of decisions: should I duck into this rabbit hole and find out where it comes out? Should I head up into the sprawling treehouses and see what climbing animals can see from towering treetops? Would I rather I dig around in the sand and see how many T-Rex artifacts I can unearth? Maybe I should set up a tea party in one of the playhouses? That would be lovely! The great thing is that children don’t have to stop at anyone decision; they can take it all in, try as many things as they wish.

In fact, from the looks of it all, children are free to have fun doing any of the safe activities planned for them. Hoola hoops? Sure. Cartwheels across a meadow? Go for it! Open a mailbox in the huge treehouse, take out a secret message and learn something new about the surroundings? We won’t tell! Everything in the new Waterfall Junction anticipated how easily young visitors can make discoveries on their own. And at Riverbanks, all discoveries all nature-centered!

Seeing all Riverbanks Zoo has to offer, experiencing everything designed for fun and excitement could take the entire day. Or more. And because nature is the director and conductor of it all, every day is different, every season presents new perspectives.

Oh, how the animals that left for vacation must have missed this place while they were away!

During the months when new habitats were being developed, beloved bear brothers Butch and Sundance were guests at the Tulsa Zoo in Oklahoma. Now that their Riverbanks digs have been refurbished, visitors can watch the brothers at play through a new glass viewing enclosure.

The bear brothers are so pleased to be home again, they are making welcome a new set of siblings who joined the Riverbanks family after saying so long to their soft-pelted friends at Miller Park Zoo in Bloomington, Ill. River otter siblings Divya, Savannah, and Sophia are now quite at home here in Columbia as well.

The welcome mat laid out at Sea Lion Landing was a soggy, wet one. And that’s just what these sea lions are accustomed to. This habitat was designed and developed to re-create San Francisco’s Pier 39, noted for its colonies of sea lions in the wild. However, it was from a seaside city miles south of San Francisco that Riverbanks got three of the males now enjoying their new home. Baja, 14 years old; Ranger, four years old; and Maverick, also four years old, all previously hung out at the world-famous San Diego Zoo. Three year old P.J. formerly resided at the Seneca Park Zoo in New York, and Gambit, age 10, lived at Chicago’s Lincoln Park Zoo.

Although it has been a while, Riverbanks has had sea lions previously. Now, though, their habitat is an impressive 35-foot long panoramic enclosure. Choices vary regarding how and from where the public can observe the antics of these sea mammals. Indoors, there are observation points underwater and overhead. There is amphitheater seating as well as the upper deck Wharf, all affording ideal vantage points for watching the sea lions (and one harbor seal) enjoying their habitat and exhibiting ballet-like grace and an occasional splash.

Along with the animals, humans and their comfort was also a strong consideration in improving Destination Riverbanks. A new pedestrian bridge is now open and is making crossing the railroad tracks a safer, more comfortable approach to the zoo from the new parking area on Rivermont Drive. Just inside, an expanded entry plaza is a welcoming point for the thousands of visitors who cross the portals each year.

Improvements to the entry plaza include a 4,500 square foot gift shop and state-of-the art guest relations center made comfortable, in part, via a solar array atop the building. Thanks to PaCE (Palmetto Clean Energy) and SCE&G, the solar addition will not only generate energy for that building but will help raise awareness about alternative energy sources.

It’s hard to believe that four decades have passed since Riverbanks Zoo and Gardens first began connecting locals and visitors to the world’s wildlife and the places in which they thrive. Now that $36 million in improvements have been made, Columbians and their guests can take in the stunning reasons why our zoo has been a top attraction for all these years.