And the secret garden bloomed and bloomed and every morning revealed new miracles.â€• Frances Hodgson Burnett, The Secret Garden 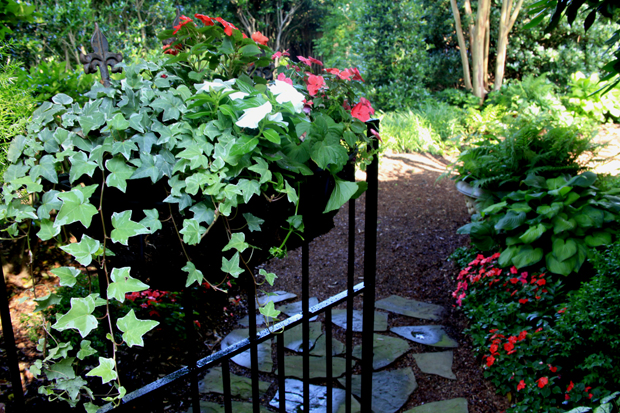 Suitably placed in a child’s line of sight, the gilded lock set on Sandie Love’s garden gate enchants those who come upon it, inviting them to behold the wonders within. She always dreamed of creating a magical sanctuary full of beguiling alcoves where children of all ages could lose themselves. The petite garden sage and self-described ‘chasmophile’ is now enjoying the fruits of a decades-long labor of Love.

“A chasmophile is a lover of nooks and crannies,” Sandie explained. As a child growing up in Miami, she was fascinated with her mother’s garden and love of plants. Like many children, Sandie was drawn to small spaces that naturally cultivate wonder and curiosity. “I have been gardening since age four, and I always wanted to create a secret garden.”

So when Sandie and her husband Cade moved into their Southeast Columbia home 26 years ago, the stage was set. At the time, their modest yard was a plain, featureless canvas. Cade first tended to the neglected St. Augustine. Sandie affectionately calls Cade the “tender to the blades.” While she never sketched out a prescribed garden plan, Sandie had a vision, as well as the foresight all those years ago to take some “before” photos. Then she got to work.

“I had to have walls to make a courtyard,” Sandie said. “And I had to have boxwoods,” which are traditional shrubs that form hedges and borders to help define the landscape. “I like my borders to be polished but not tortured. I want them to feel billowy.”

Sandie then focused on making the garden entrances welcoming. Black wrought iron gates abut an aged brick lattice with climbing green finery on one side; a white iron gate with an embellished watering can attached hails from the other. The Victorian lock set was a prize find for the avid antique enthusiast. “To me, it's especially beautiful because the knob has flowers on its face,” Sandie said. “The lock set found me at an antique shop in Camden. The tag said it came from the railroad station in Baltimore, dating to the 1800s.”

Themes help bring together any artistic composition, including a garden. “I started out with a white garden. That takes a lot of discipline,” Sandie said. “I love the white glow of the garden at night. … The bones of the garden are still white, but I have added color accents.” Among her favorite blooming colors are periwinkle and coral.

“Every garden has some kind of challenge,” Sandie noted. “Where the grass wouldn’t grow, I let that dictate what to do,” which meant creating natural, curved walkways with mulch and stone and letting the elements direct the flow. “I’m enamored with the visual poetry of the curvilinear line,” she wrote in her garden scrapbook. “Like a babe attached to a mother’s hip, I carry it with me to my garden.”

The brick patio needed something, and Sandie decided to introduce moss. “I love moss!” she said. “But I couldn’t get moss on that back patio for a very long time. I tried everything.” Based on word-of-mouth and common folklore, she tried pouring horse urine on the brick surfaces; that didn’t work. Then she tried buttermilk; that didn’t work, either. Only long after she had given up did moss magically begin to appear.

To add depth and definition, Sandie employs a dense, grassy groundcover known as ophiopogon (the family calls it “Nana grass”). She also plants it to fill gaps in the brick patio, creating a textured patchwork effect. Having studied art and design at the University of South Carolina, Sandie purposefully weaves unadorned green areas into her garden design to provide a resting place for the eyes. A garden should not be so cluttered that there are no focal points. There are many shades and hues of green that create monochromatic dimension to the landscape. “I try to create sweeps of color,” Sandie said. “Be it a garden or window box or a flower arrangement, I view each like an artist painting on a canvas. I am preoccupied with all the elements of design and the relationship of the objects to one another.”

“I don’t go by the rules,” Sandie said with a grin. “I like to know the rules, and then I like to break them.”

Adding depth and whimsy to the garden are a series of specially foraged objects − from a stone Roman bust with a green crown of leaves to rabbit sculptures given inventive names such as “Rabbit E. Lee” and “Little Bunny Foo Foo,” and “Thumper.” A curvy reclining frog is called “Madam Fiadora.” A pair of leap frogs that frolic along the fountain’s rim were christened “Jeremiah” and “Delilah.” The bronze cherub face of a little girl peeking from the ivy is named after the Secret Garden's “Olivia.” And a lady mannequin rescued from a Charlotte flea market adds cheer to the garden in her playful straw sunhat.

Other beloved additions include an Italian urn that Cade presented to Sandie as an anniversary gift one year. Another year, Cade made a fire pit that is a social gathering place for roasting marshmallows and telling stories. The Loves relish sharing plant cuttings with friends and neighbors who share their passion. “I am really in tune to the whispers of pass-alongs,” Sandie noted. “Hydrangea cuttings, Larkspur, and Poppy seeds, White Iris bulbs, Guacamole Hosta.” Sandie can associate most every gifted plant with the name of the person who shared it.

An ongoing project for Sandie and Cade is transforming the brick outbuilding in the back yard into a garden house for entertaining. Its signature feature is an exquisite pair of French doors with individual, beveled squares of glass. An “out porch” has been lovingly tended into an outdoor sitting room featuring a fireplace, rocking chairs, a table lamp, and a couple of antique tables. One is a marble-top library table with “legs wrapped in iron ribbon,” which the couple found in Charleston. The other is a marble-top wicker table adorned with an Italian iron lamp, both family heirlooms. The most striking element on this table is a giant Victorian glass bell cloche enclosing an enchanting vignette of collectible objects. In fact, there are glass cloches of all sizes throughout the garden.

Cloches originated in Italy during the early 1600s to protect delicate garden plants from frost or to expedite growth. The French call them bell jars. Many of Sandie’s cloches are themed around bird’s nests and eggs. The ones with plants function much like terrariums. Others might hold such treasures as gourds, antlers, or seashells.

“Bring the outdoors in,” Sandie wrote in her garden scrapbook, “and the indoors out.”

While it was constructed with a child’s sensibilities in mind (the Loves have two grown children), so far there are no grandchildren to share the garden with. But that’s OK. They have “grands” of the furry variety. “My grand-doggies are Bill’s teddy bear Lab, Charlie, and Amy’s baby queen Cavachon, Dolly,” Sandie said.

As the seasons continue to change, spring remains the most exciting time.

“In early March, the Clivia bursts open with her announcement to get your Atlas 340s on,” Sandie quips in reference to the preferred work glove of master gardeners. “My children will forever associate with their mom the smell of sweat and manure instead of sweet perfume. Cade has come to mark every important occasion in my life with a boxwood and a sack of mushroom compost … I can never have too many boxwoods or too much dirt.”