Despite lots of moves around the U.S. and countless home purchases, this couple never created their perfect house from the ground up. Until now. 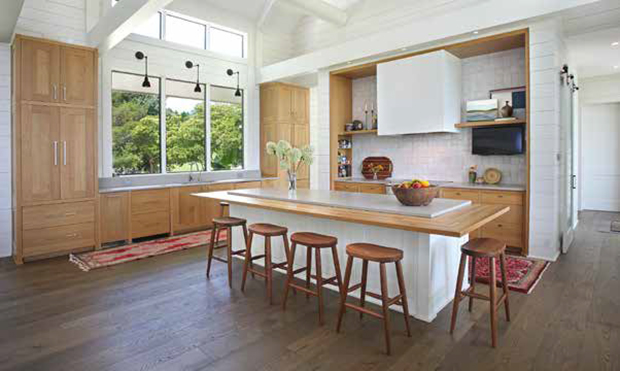 Lynn and Bill plan to split their time between two homes, one on Florida’s gulf coast and the other along the shores of Lake Murray. They looked at property and houses for a long time before finding the land and view that called to them. The view was stunning, but the land and existing structure? Not so much.

“There was an older home on the property, but it couldn’t be adapted to our vision, and the bushes and trees were overgrown,” Lynn said. “Once it was all cleared off, the result was a very happy surprise – it was a beautiful piece of land that was perfect for the house we wanted to build.”

Lynn and Bill had been researching and noting what appealed to them for 25 years. Along the way, they raised four children and moved frequently for Bill’s work. As they settled on their preferences, it became clear that they needed to be on fresh water in South Carolina – near Columbia. Lake Murray fit the blueprint. With all four children launched, or close, now was the time.

They found Catalyst Architects, and Heather Stallworth, Wayne Rogers, and Brandon Rogers embraced the challenge. “Working with the family was a collaborative process that pushed us to explore a new, more minimalist vocabulary which included cantilevered porches and exposed ductwork,” Heather said. “The result is a home that is more modern than many around it, but the simple gable forms and use of traditional materials made it fit nicely within the neighborhood.” Indeed, it does. And everything works seamlessly together, so much so that in 2018, the project received a Robert Mills Residential Design Merit Award from the American Institute of Architects South Carolina. A tour of the home, detached barn, and outdoor space revealed why it was award-worthy.

First, however, the right builder had to be found. “Joe and Tammy Jur at Vesta Builders were wonderful to work with,” Lynn explained. The couple started the business in 1999, and since then, they have built a reputation for excellence. What’s more, they make the process a positive and exciting experience which Lynn and Bill really appreciated. “This was a fun house to build,” Joe said. “The beams running through the main body of the house cantilevered out over the front and rear porches, negating the need for columns and making the roof appear to float.”

Two interior designers assisted the homeowners. Evon Kirkland of Westend Interiors worked with them during the building, and Jenny Keenan Design helped with wallpaper choices and furnishings. The result is extraordinary and yet accessible and very livable. The HardiePlank ® Lap Siding has mitered corners, a stone veneer on the foundation wall, and a standing seam galvalume roof. You don’t have to step inside to recognize the quality and workmanship, but once you do, you get it.

No wasted space clutters the look. The front door opens onto the family’s primary living space.

Straight ahead is the dining area, to the right is the living area, and to the left is the kitchen. There are shiplap walls painted Silver Shadow by Benjamin Moore and a vaulted ceiling with exposed spiral ducts. Wood beams span the room between floor-to-ceiling glass. The overhead lights were custom made by Coastal Copper and sourced through Evon Kirkland.

The large dining table was custom made by Josh McClary at Stijl Design, using old heart pine beams from a house in Leesville that formerly stood in front of Walmart but was torn down. The couple bartered a tear-drop camper for the custom-made table.

Two framed original pieces of art by Elizabeth Foster are flamingos, created with personal touches meaningful only to Lynn and Bill. It’s casual but elegant, modern and minimalist, and very inviting.
The functional parts of the kitchen are hidden behind cabinet doors. The only visible acknowledgment that cooking happens here is the sink, and it’s positioned along the front cabinetry. Behind the kitchen, sliding doors reveal a fabulous pantry (one of Lynn’s favorite rooms). Pots and pans hang on the wall – no stacking needed. Every appliance has its place.

At the left end of the house are the laundry room and Lynn’s office. A drop-off inset holds paraphernalia. The powder room and garage complete the wing. Wainscoting reaches high to allow wallpaper where desired – but not too much. Nothing looks busy. 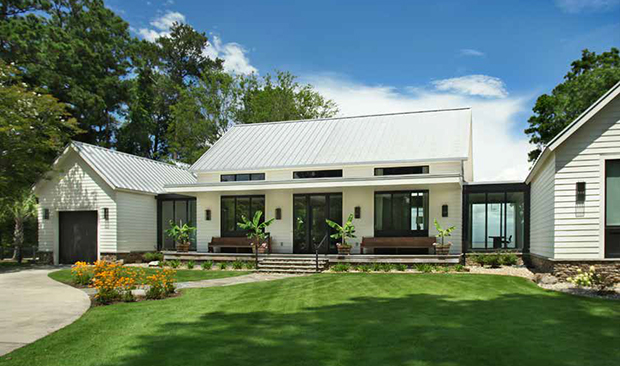 To the right of the living area is Bill’s office space. It’s the connector to the sleeping wing and houses a large television, an amazing wooden table, and a back wall of silver fish sculptures. The table and fish sculptures were purchased from the Phillips Collection, out of High Point, NC. Glass on either side keeps the area very open and filled with light.

The lakeside features the master suite, including a massive ceiling fan undulating quietly. The couple’s closet opens from the master bath, and the overhead light creates patterns on the walls. Another happy surprise. Everything in the room, except the overhead fan, was sourced by Jenny Keenan.

Toward the front of the house are two more bedroom suites for family. Their younger daughter’s room has tall wainscoting painted in Vert de Terre, by Farrow and Ball.  Above it is wallpaper by ZAK+FOX and sourced through Jenny Keenan. Both rooms are lovely and designed to maximize efficiency and comfort. And that’s the main house.

Outside toward the lake and beside the deck is Bill’s grilling area (with storage for his six grills).  A small ramp ensures that Lilly, the Welsh Corgi, can easily maneuver the levels to reach the deck and barn. Now in her golden years, she makes sure she’s close to Bill at work or play.

And then there’s the barn – or combination man cave, party place, and frat house, according to Lynn.

It is large and open, and filled with memorabilia. Lynn is from Ohio, and the couple met on a blind date in the buckeye state. Originally from Buffalo, Bill has an impressive collection of Buffalo Bills jerseys, celebrating some of the greats of that franchise.  A massive overhead glass door opens the entire room to the outside when the weather is just right. According to Joe, a phantom screen drops down to keep the room clear of nature’s flying birds and insects. If a breeze is in order, they crank up their huge overhead fan sourced from the Big Ass Fan Company. Aptly named, for sure. A large oak bar spans one wall, and a complete kitchen is on the other side.

It’s Bill’s favorite room in the house – a getaway that’s only steps away.

The stairs display hundreds of koozies, a collectible favorite of Bill’s. At the top of the steps are bunk beds (the source of the frat house analogy) and a private bedroom.

Throughout both buildings, the furniture pieces look as if they were designed with the home in mind.

Instead, they came from upscale shops, online collections, and places like Crate and Barrel and Southeastern Salvage.

Lynn gives lots of credit to the team at Catalyst for working with them on the design. She can’t say enough about Joe and Tammy Jur and their part in making the dream home become reality. They were delighted with the subcontractors as well. All skilled professionals. Joe says that the house turned out just great in large part due to Lynn’s creativity.

Evon helped in the initial paint and lighting choices, and Jenny assisted in choosing lighting, wallpaper, and lots more to adorn the home. Outside, Brookegreen Landscaping did a super job with plants, trees, and the lawn leading down to the sandy beach on the lake front. That piece of it was a gift from nature.

For Lynn, perhaps the most unexpected surprise came when she began to observe the wildlife. “I never thought I would become a bird watcher, but I love seeing the birds and all the wildlife out here,” she said. “We knew we were water people, and the lake is our playground, but the abundance of nature all around us is a delight. And with the lake sky at night, we had a front-row seat for the total eclipse. We are very happy with the whole package.”