Explore a gorgeous, recent renovation in The Heritage Condominiums 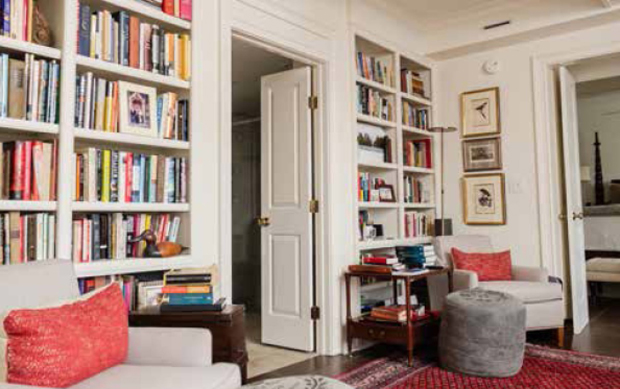 When Kaki Zeigler can’t easily find her husband in their downtown condominium, she peeks outside their bedroom and often spots him reading or napping on the balcony. His outdoor sofa was made to fit his tall frame and the breeze is a given at treetop height. The perfect hideaway above the bustle of the city for 40 winks or a quiet moment with a book.

It’s one of many serendipitous discoveries in the family’s move from a 3,600 square foot home in Shandon (plus ample gardens), to 2,400 square feet and no yard at The Heritage on Senate Street. But the decision to move didn’t come easily.

“My husband began to push this idea a bit before I thought I was ready,” she said. “I didn’t want to lose my old roses and neighborhood and I was particularly anxious to have room to entertain family and friends – I live for my family.”

Indeed, that was part of the reasoning for even considering a move, “ten years ahead of retirement and possible health issues,” Belton Zeigler explained. The Zeiglers wanted to downsize but, more important, they wanted a secure downtown location that worked for their family. Their daughter Elizabeth lives with them and doesn’t drive. She needed walkability, a doorman, and a welcoming community close to her work at a downtown child development center. They found all that and more at The Heritage, but the stars had to align before Kaki was willing to sign onto an entirely new way of life. 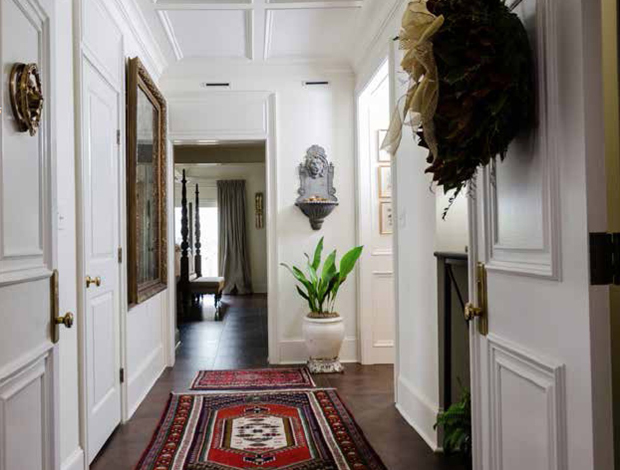 “I had so many stipulations that I was certain it would never happen,” she said, laughing. Two side-by-side units had to come open for sale at the same time, no higher than the fifth floor, and if all that worked out, their home in Shandon had to sell. But everything happened as if planned, and the die was cast.

“I was still reluctant, but Belton said something that really made me think,” Kaki said. “You know what you are leaving behind but you don’t know what you’re walking into,” he said. She realized she was experiencing change not as opportunity but as loss. “Turns out, it is the best thing we’ve ever done.”

First, the work had to be completed opening access between the two units and tearing everything out of the larger unit, including most of the interior walls. One condo was a large two-bedroom; the other also had two bedrooms, but was much smaller. Belton and Kaki created a spreadsheet and planned how the rooms could be configured and how to maximize their use of space.

“It makes you confront your own priorities to contemplate a move like this at our active stage of life, and downsizing by almost half demands careful planning and looking at each possession to judge its importance,” he said.  Belton, a utilities lawyer, had looked at a number of locations before finding that The Heritage met their requirements, and more.

Architect Tim Hance drew their plans. Karen Menge, designer and president of Pulliam Morris helped them with decorating decisions, including how to position their family pieces to take advantage of a very different space.  And Kaki’s brother and business partner, Deas Manning, of Longfield Residential, LLC, was the construction contractor.

There were challenges along the way, including limitations on penetrating floors and ceilings, moving the locations of bathroom fixtures, the imperative to create as much interior space as possible, and combining the two units while maintaining distinct footprints to allow for future needs.

They installed a new smaller and more efficient heating and air conditioning system, allowing higher nine-foot ceilings throughout the larger unit. Doorways are large enough to accommodate a wheelchair, if ever needed. Pocket doors slide easily into the walls. All construction is ADA compliant and with only one hall, maneuvering is effortless. Every room is painted Sherwin Williams 7012, creating easy visual flow throughout. The same flooring – Italian porcelain tile from the Tile Center – is used everywhere. “If I had known how easy this floor is I’d have installed it years ago,” Kaki said.

“Consistent colors and simple patterns are what makes a small space feel large,” said Kaki. “We also wanted to draw the eye to the outdoor views which look into the tree tops along Senate Street.” And the space does just that.

Exterior light from large windows bathes the rooms and furnishings. The windows invite views of nature at every turn, and the wraparound balcony is filled with plants, a fountain, garden elements artfully placed beside comfortable furniture, and Belton’s 220 volt electric grill. “I love it and it works as well as any gas grill I ever owned,” he said. (Gas grills are not allowed at The Heritage.)

The balcony gives Kaki a taste of gardening without the hard work that used to consume her weekends. “We have a barred owl in the neighborhood and a number of birds have discovered our fountain,” said Belton. “A murder of crows visited us the other morning for a drink and a bath.” Indeed, the balcony feels like a luxury treehouse, nestled among the tree tops and outdoor space.

“Our first weekend here, I asked Kaki what she was doing. She was just sitting on the sofa reading,” Belton said. “She was amazed to realize that for the first time in a long time she had nothing she needed to do for the house or the yard.”

Before moving, the couple decided which furniture would probably work and offered a number of extra pieces to their children. On the suggestion of a friend, they rented several storage units to store possible substitute pieces until they settled on final configurations and switched a few items around as they adjusted to the new space. Every square foot is utilized starting with the kitchen, which has a generous multifunctional island topped with Calcutta Gold honed marble.

A large family dining room table with many leaves can be expanded so that all of the extended family can dine together. “Entertaining buffet style, we’ve had 75 people here comfortably,” Kaki said. “It totally banished any concern about entertaining and bringing family and friends together.” An Irish altar graces the wall, a purchase made during travels. “Our philosophy is to buy what you love and it will always work in your home,” she said.

At the end of the open room is a sitting area, which leads to what Belton calls the “Growlery,” a small room that serves as Belton’s home office, library, TV room, storage area (behind the TV , which is on a hinged panel), and a daybed. His name for the space comes from the Victorians who built small rooms in their homes where husbands could go and “growl.” These spaces were also called “fainting rooms” to afford the ladies a place to recover from too-tight corsets. In this home, it’s often used by friends watching a game. Nobody faints; and nobody growls, “most of the time,” says Belton.

The master has two bathrooms and two closets – plenty of storage and balcony access. The bathrooms feature tumbled marble for Kaki and smooth mountain stones for Belton. The laundry has been moved to the smaller unit and that area is now home to Kaki’s shoes.

Built-ins, under bed storage, and carefully reconfigured closets make sure no space is wasted. Almost every void in the walls is a closet, some only eight inches deep, but tall enough for fishing rods and other tackle. Double pocket doors extend the living space into the former smaller unit, moving seamlessly into another living room, small kitchen, the laundry room, storage closets, guest bathroom and two bedrooms, one of which serves as Kaki’s home office.  The other bedroom includes an en suite bathroom for their daughter.

And what about the loss of outdoor space when you live in what Kaki calls a “vertical neighborhood?”  The balcony helps greatly, but so does the heated swimming pool and outdoor gathering area. They’ve made friends and The Heritage has parties for all sorts of events, including the pool opening and holidays. Walking to work is an option and there’s always Uber for a quick ride to restaurants and gatherings.

This new lifestyle has allowed Belton and Kaki to travel and discover shared passions. “We went fly fishing in Montana last year and enjoyed an extended business trip to England this year,” Kaki said. “Our daughter has met so many friends here in this building and is quite happy on her own.” Kaki’s mother lives in the building, which allows them to check on her frequently. “I never thought I’d be living here too, but it is so convenient and I love it when she wanders in and we enjoy a glass of wine together,” she said.

What became the best move of their lives compelled the Zeiglers to ponder others who may be considering a move so that they, too, can age in place. “Baby boomers are retiring every day, and the appeal of downtown living has grown,” Kaki shared. “Our advice to others would be to think about that, because there are many more retirees and 60-somethings than there are condominiums that can accommodate them and their lifestyles. You can’t imagine how wonderful it is to know that we are settled, with every convenience and amenity at our fingertips.”

Yes, the Zeiglers walked away from a home and neighborhood they loved but in the process, found more freedom, discovered new friends, and fell in love with their vertical neighborhood. “The peace of mind we’ve achieved as a result of this has been nothing short of remarkable,” Kaki said. “We know what we’re walking toward and we like what we see.”