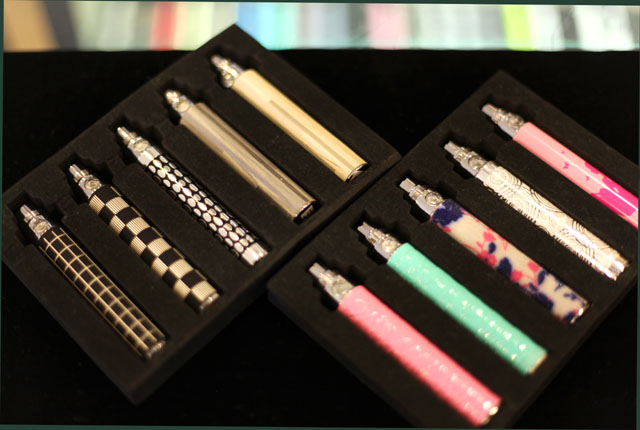 John Cross points out that the reality of the myriad of health issues that accompany cigarette smoking is enough to motivate many to seek alternatives.

John Cross smoked two and a half packs of cigarettes a day for many years. His wife, Kimberly, smoked at least two packs a day. Her son, Dustin Sisler, was a two-pack-a-day smoker as well. All three not only have quit smoking cigarettes, but they are smoke-free because of the increasingly popular concept of the electronic cigarette – a smoke-free alternative. As a result of their habit-kicking success, this family (John and Kimberly married earlier this year) has made the burgeoning electronic cigarette industry their business, their career, and their soapbox.

Dustin, who is 32, began selling the electronic cigarette kits a few years ago at a local flea market; he researched the industry and the process and soon determined that he could learn to manufacturer the liquid – a key component of the electronic cigarette industry – and create a better product than the one he ordered. His mother joined him in the ownership of the business, and John joined them later as general manager. Their Elite Vapors business is located in the shopping center with the Flight Deck restaurant on Old Chapin Road in Lexington.

The history of the electronic cigarette reaches farther back than most think. In 1963, an inventor, Herbert A. Gilbert, recognized the hazards of tobacco long before many others and began figuring out a way to enjoy the pleasures of puffing on a cigarette and still avoid the health pitfalls. He came up with the idea of an electronic device, but no one took the bait. There simply was not enough of a health scare yet among those who smoked.

Regardless, proponents – like John, Kimberly, Dustin – and many others, are singing the praises of electronic cigarettes. Last year, according to an August 2013 article in Forbes magazine, The Centers for Disease Control (CDC) reported that use of electronic cigarettes, also known as e-cigarettes, rose from about 10% in 2010 to about 21% in 2011 among adults who smoked combustible cigarettes. That number is expected to have risen even more significantly in the past two years.

John Cross points out that the reality of the myriad of health issues that accompany cigarette smoking is enough to motivate many to seek alternatives. Some of those health issues are high blood pressure, high cholesterol, heart disease, cancers of the lungs and other areas, and emphysema – just to name a few. Many of Elite Vapors customers begin to use e-cigarettes out of fear of acquiring a life-threatening illness from smoking traditional cigarettes. Others try e-cigarettes out of curiosity and then end up enjoying them for their flavors.

Elite Vapors’s main selling card is its liquid product. Different levels of nicotine (a stimulant) can be added to the liquid flavors – or not. John says that he and Kimberly still desire some level of nicotine, while Dustin does not. Flavors range from the traditional tobacco or menthol tastes to everything from cheesecake to grape soda to atomic fireball to green apple. In fact, Elite Vapors offers at least 120 different flavors. Customers can use a different flavor each time or settle on one or a few.

The Elite Vapors starter kit comes in multiple case colors, with two batteries, two tanks and charging units, along with a bottle of liquid. This sells for around $90. A 15 milliliter bottle of liquid for the e-cigarette is around $9. Since a user can puff on an electronic cigarette as often or as little as desired, the savings compared to traditional cigarettes is significant, explains John.

“You really only get about 15-20 puffs off of a regular cigarette – and you have to smoke the whole thing right then.” At $50-plus a carton, he says the expense is significant. Plus, he points out, “if you light a cigarette, you’re married to it until it’s gone or until you put it out. And, with electronic cigarettes, you don’t have to go outside to smoke.”

“The sensation is the same as smoking” says John, who admits he enjoys e-cigarettes and has kept as many as 20 different flavors his desk to try throughout the day. It takes different amounts of time for each individual person, but he says you can “retrain your brain” to accept that the nicotine is coming from the e-cigarette instead of a traditional cigarette. Some, like Dustin, give up the nicotine altogether and just enjoy the flavors.

“We have such a varied customer base … from 18 to 80 years of age,” he says. “Some say they feel like the electronic cigarettes might have saved their lives. Many transition from it being a habit to a hobby.” Since each customer is different, John says they will look at the profile of the customer and provide education about how they should transition to e-cigarettes. Some customers, for example, need to slowly back off from a particular level of nicotine. Some transition easily and never need nicotine again.

Elite Vapors as a retail venture became so popular so quickly last year that within a few months the store was expanded to 1,400 square feet. Currently, the company is building an off-site lab in Lexington for the production of the liquid; John says the lab will be “fully DHEC inspected” and overseen by a qualified chemist. Although there are no current requirements by DHEC, the company wants to maintain the highest possible standards for their mixing lab and keepthem fully involved in the process.

Besides the thriving retail store, Elite Vapors sells to customers in every U.S. state through its website. “We have even had orders from soldiers stationed in Iraq and Afghanistan.”

John says that for the most part, Elite Vapors focuses on quality customer service for repeat customers and quality education for new customers. “We pride ourselves on quality in all areas,” he says.