Under the guidance of their enthusiastic leader, Seven Oaks Park, Crooked Creek Park and Saluda Shoals Park serve their respective communities through dozens of programs, special events, and recreation. 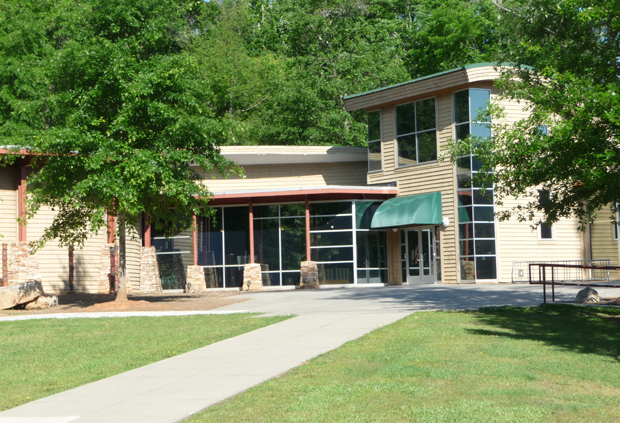 Thirty years ago, the executive director of Irmo Chapin Recreation Commission (ICRC) left the field of social work and entered park and recreation management with ICRC.  Today, Elizabeth Taylor is just as passionate about the way parks create community as she was in the beginning. And during her eight-year tenure as executive director, the program has blossomed in recreation, education and services.

“I really care about people,” she said.  “I entered this field first through the Council on Aging, and absolutely fell in love with providing services and support to our senior citizens.”  Elizabeth counts the development of a senior center congregate meals site at Seven Oaks Park among her favorite accomplishments. “Many years ago, when I was working as program coordinator at Seven Oaks Park, we saw the need for a meals program, and we got the support of Harvest Hope Food Bank, and along with Redeemer Lutheran Church volunteers, we got a program going. Now, and for many years, it’s been fully funded five days a week, serving as many as 50 senior citizens in one sitting.”  Just last year, the Congregate and Meals on Wheels program for Seven Oaks and Crooked Creek Parks delivered 21,039 meals, driving 18,674 miles to get the job done.

After the October flood, Seven Oaks Park became a shelter for those displaced by the waters.  Elizabeth remembers the volunteers rushing to help and the area businesses providing food, water and other needed supplies.  “The first family who arrived at the center was an older couple, accompanied by their two dogs.  The four of them had been awakened by rising flood waters in their bedroom, and they escaped with the clothes on their backs.”

Through the days that followed, the park served as the hub for the entire community, and never ran out of food and supplies for humans or their companion animals.  The visibility of the assistance encouraged others to help.  Trucks dropped off pallets, bags and water.  One day, a man walked into Seven Oaks Park and paid for every child being sheltered to attend the afterschool program.  It was incredible – but not surprising according to the staff members who worked endlessly to keep everyone comfortable. “Good, dedicated people joined together to help out our neighbors,” said Taylor.

It’s all a part of the mission of ICRC, which the executive director fully embraces.  “I am so committed to creating opportunities and spaces that are accessible, safe and appealing, where fun and learning can flourish and spirits can be renewed,” she explained, walking along the Wetlands Boardwalk at Saluda Shoals.  The winding path traverses woods and water, with overlooks and platforms allowing children to get up close and personal with the tiny creatures in the water (supervised, of course).

The Wetlands Preserve is one of many ways visitors can connect with nature, an opportunity that is more elusive within urban areas.  “I grew up in McColl, and enjoyed spending time at family and friend’s farms,” she said.  “We all took the ability to play in the woods for granted.  Now, it’s something many children just don’t often experience and we have it here.”

There’s a dog park in Saluda Shoals, where humans and their furry companions can enjoy social time with their peers.  And daily, folks find time to walk along the paths that crisscross the woods and often parallel the river – exercising and renewing their spirits, simultaneously.

Park Rangers conduct camps and walks, and children enjoy the splash pad during the long Columbia summers.  It’s that way at the other parks as well.  Recreational fields are filled with games, while parents cheer from the sidelines, or from bleachers by the basketball courts.

“Our centers mean so much to people, and each one reflects the neighborhood surrounding the grounds,” Taylor explained.  “Seven Oaks Park, in Irmo, has a very active senior center, and serves 150 children in its afterschool program; Crooked Creek Park, in Chapin, sees lots of young families and has large youth programs; and Saluda Shoals is simply a breath of fresh air next door to the city.”

As the youngest of the parks, Saluda Shoals was born from a promise to create a self-sustaining park in a large natural setting.  In 1997, when plans were unveiled and seed money requested, it was with the agreement that Saluda Shoals would pay its own way – another accomplishment that is important to Taylor.  That revenue comes from many sources, including a popular River Center that is booked 18 months in advance for weddings and other celebrations.  And it keeps growing, now more than 500 acres of parklands among the various parks.  Attendance is growing, too, topping 1.8 million visits last year.

The newest project has just opened, at the end of Saluda Shoals closest to St. Andrews Road.  The new Palmetto Health Fields, all six of the complex fields and the Bi Lo Guest Services Pavilion are serving the community, and beyond.  Recently, the US Quidditch Cup was played there, welcoming 60 teams, 1200 athletes and their families and friends.   Harry Potter would have loved it!

One of the most beloved events is the Holiday Lights on the River, the Midlands largest drive-through light show held each holiday season.  Thousands of families enjoy the tradition and get into the holiday spirit.  A new Chapin park is underway, and Seven Oaks expansion was completed this past year.

Clearly, the existing programs keep growing and new ones are developed every year.  “Our vision talks about innovation, enthusiasm and teamwork, and we’ve got all that in abundance,” says Taylor.  Nature’s Theatre is an outdoor performing arts venue, planned with a covered stage that will seat 1,000 upon completion.  It will be a showcase for the entire region.  And in the not too distance future, the Saluda Shoals District hopes to help complete a greenway that will reach from the Lake Murray Dam to Riverbanks Zoo.  “Imagine,” said Taylor, “Being able to hop on your bike at the dam and pedal to the zoo for a picnic.”

The world of possibilities has no end, here, and when asked when she plans to retire, Taylor simply smiles and shakes her head. “There are so many great projects we’re working on, and I’m eager to collaborate with our staff and volunteers, and the businesses and individuals who share our vision – to help our community live healthy, satisfying lives. We’ve still got work to do.”

Four grandchildren (was it four?)

Certified by the National Parks and Recreation Association

SCRPA Professional of the Year 1999