Everything Old is New Again

By Melissa Sprouse Browne  Photos by Rob and Jon Photography 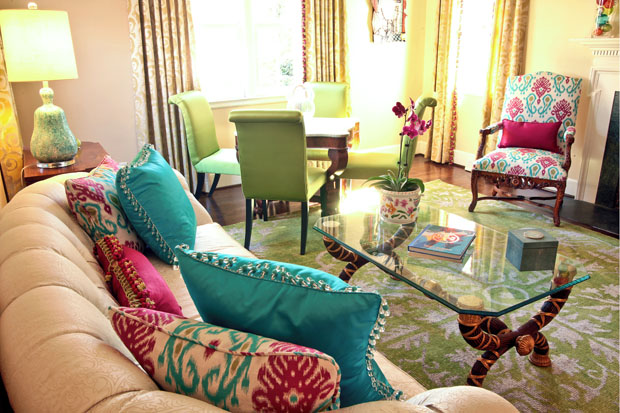 Two bedrooms, one bath – arrangements many of us have had in life. Usually, there’s a kitchen to go with it. For Barrie and Jack, this deal only came with a microwave and a fold-up table. When the couple finally decided to undertake a massive renovation project on their Heathwood area home, they were relegated to tenancy in their own upstairs for six months while the entire downstairs was restructured, remodeled and totally redecorated.

Barrie and Jack bought their home 18 years ago and, for the last 15 of those years, wanted to renovate. “When we bought this house, I thought ‘who in the heck would buy this piece of junk?’” Jack joked. Today, no sane person would ever think of this mid-century masterpiece as anything but remarkable.

To get the project underway, a team of professionals was selected. Leading the construction side was James and Scott Elliott of Elliott Builders, a father/son team with more than twenty years of experience in the Columbia area. Barrie couldn’t say enough good things about them. “They did a renovation next door and it was fate that we found them. We loved working with them! We’re the lucky ones who didn’t have any trouble with our builder and best of all, they didn’t go one penny over budget. We were sad when they finally left.”

The interior design was led by Paul Sloan of Sloan Interiors. His seventeen year long relationship with the couple made him the natural choice to guide this critical aspect of the downstairs makeover.

“Barrie’s taste has evolved over the years into much more colorful and bright, fun and contemporary looks,” shared Paul. “It’s no longer the deep and rich palette. She’s headed into a whole other direction. Definitely, color is this couple’s strong suit. They don’t like too much that’s bland, so we like to punch it up. I live close by and it’s easy for me to stop by and make sure everything fits,” Paul said.

The impact of the finished renovation is apparent from the moment you step inside. From the main door, you enter the foyer, replete with quatrefoil print and eclectic glass orbs. Just as you begin to absorb the blue and gold hues found here, your attention turns to the right. The dining room, which is impressive even at first glance, takes the color scheme to new heights.

Barrie appreciates how special the walls are and how much work went into achieving this custom design. “Georgia Lake did my dining room, my bathroom and the kitchen cabinets. We were looking at finishes and samples and blended three together,” Barrie explains. “She spent a couple of weeks here. She would paint a layer, come back when it dried and paint another layer. People think it’s wallpaper, but it’s a banded paint scheme. Georgia looks at your fabric and works with your decorator and here we are.”

Jack commented on the large amount of gold leaf material that was needed to complete the look. “We were looking for unusual in this renovation. We didn’t want something that someone else had already done before,” he said.

In the quest for perfection, the couple experimented with accessories, but maintained the same core group of furnishings in the dining room. “We’ve been to every decorating store from here to Charlotte and Charleston,” shared Barrie. “I can’t tell you how many accessories we brought home, only to take them back because they weren’t the best fit.”

The inspiration for the dining room’s unique look started with the window treatments. Barrie subscribes to the philosophy of finding one thing you love for each room and then working around it. “We needed the draperies to fit in and Georgia had this fabric to go by. When you walk in the front door, you want to look left and right and have everything flow and look right,” she said.

The couple redecorated the den a couple of years ago. In keeping with the same feel of that earlier redesign, those colors drove the change. “I call it decorating creep. You start and do this one project and then it makes the thing next to it look bad,” Barrie said about how the renovation and redesign was formulated.

The renovation was more than cosmetic; several structural changes were required to get the desired effect. They added a new part of the kitchen, a totally new entry and laundry room on the right side and on the other side they added square footage to the bedroom, walk-in closets and a new master bath, allowing an expansive rear porch to be sandwiched between. Being able to add the porch was one of the must-have items on their to-do list.

“I just love being outside, reading in the chairs,” enthused Barrie. “I had a picture from a magazine from almost 17 years ago and the outside of that house looked like ours and it had a porch I fell in love with.” All told, they added 650 heated square feet and 900 square feet total under the roof.

“We widened the entry from the den to the kitchen, which made a huge difference. We reconfigured a downstairs bath to be a powder room. The powder room used to be entered from the den. That made the den feel bigger because you don’t have a door there any longer,” Jack said.

The main area of the home that needed to not only feel bigger but actually be much larger was the kitchen. The original configuration was quite small. When the couple had friends and family over for the holidays, their guests could hardly believe there was enough space to even cook the meal. Through the magic of clever design, the only thing in the same place is the sink and the window.

All new GE Monogram Series appliances bring the kitchen up to date and are perfect alongside warm golden browns and tans in the granite and cabinetry. “We worked with the cabinet contractor Elliott Builders suggested and after two or three hours, the design was done,” Barrie said. While she loves everything about the new kitchen, Jack is a fan of having storage at a better and deeper level.

“I like the big pull-out drawers,” he said. “When you’re 6’5”, leaning way down to put pots and pans in the drawers is no fun. Plus, when we cook, we cook big, so now we have three ovens.” They really enjoy the additional counter space and room to simply walk around. They multi-task the island, eating there and even doing office work, now right in the kitchen that was previously so cramped.

When the couple selected the tile for the backsplash, that became the focal point for the design elements in that room. Of course, the small details had to fit in with it as well. The cabinet hardware is one of those minor details that gives the finishing touch to the kitchen’s overall look. But finding just the right hardware was not an easy task. “I looked at a lot of pulls and am thrilled with the ones we got,” Barrie said. “When we were snowed in last year, I looked at every pull on the internet for the kitchen. I knew what I didn’t want and eliminated from there.”

The light fixtures for the kitchen gave them another treasure hunt, since they wanted non-traditional lights. They found the solution at the Bohemian on Devine Street. “We left no store unturned. If it sold house things, we’ve been there at least once,” Barrie said.

From the kitchen, you transition easily into the den through the new, larger opening. The den is furnished with existing pieces and has doors leading out to the all-important rear porch.

Down the hall, you’ll find a reconfigured master suite with two baths, a his and hers anyone would love. The master bedroom more square footage, a removed door and two full baths. A serious change to the existing bathroom created Jack’s private paradise. “I love this bathroom, it’s my favorite thing,” Jack said. “It’s right off the bedroom, and before I was walking down the hallway to use the old one. The décor is just so me.”

The master bath is a teal and blue wondrous place of serenity for the woman of the house. “This room started with the wallpaper. I had it picked out before we started the renovation and knew I wanted to utilize it. Georgia was here and had some samples and we worked through until we found the perfect combination of paint and finish to go with it,” Barrie explained.

The chandelier over the soaking tub is a good fit, as the pop of color looks tailor-made for this room. “I convinced Ferguson’s to sell me the floor sample, because I couldn’t get it ordered fast enough. The electrician needed to hang something there and nothing else would’ve worked as well as this fixture,” Barrie said.

Just as in the kitchen, the cabinet hardware was the subject of much research. “I hit the jackpot when I found these pulls. I obsessed over them. They’re perfect in here,” Barrie continued.

Her favorite feature of the renovation is the master bath. “I just love the cabinets and how they look. They came out beyond great and you don’t see that type of look very often. Georgia hand-painted the cabinets with a combination of paint and silver leaf.”

Barrie and Jack are happy with their new, “old” home. They say it’s like moving into a house you haven’t lived in before.

“With the combination of Paul Sloan and Elliott Builders and people like Georgia Lake, I think we’ve created something very unique that is totally us. Without a good decorator and a good builder, it would have been overwhelming,” agreed Barrie and Jack. “Most people, when they see what we did, just can’t believe it’s the same house.”