One of Columbia’s most historic properties 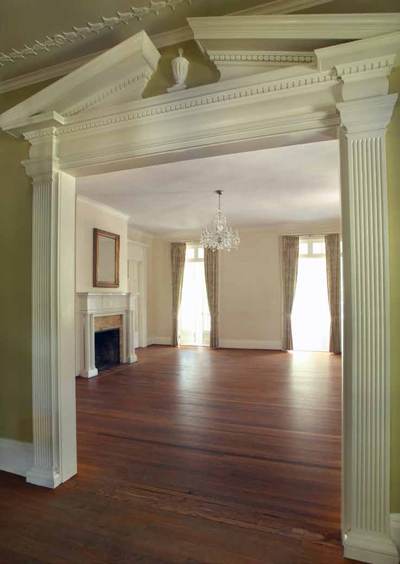 One of Columbia’s most historic properties enjoys the distinction of featuring the city’s oldest standing building, whose fine details belie its former austere character. More than 220 years later, it’s getting dressed up again for its next act.

Walk up to the Seibels House and Garden on Richland Street and it feels substantial, perhaps even aristocratic.  To the casual observer, the former residence looks like a remarkably well-preserved old lady to be well into its third century.  For John Sherrer, Director of Cultural Resources for Historic Columbia, there’s so much behind the façade.

“To me, the building is a constant source of discovery,” he said. “I’ve had the privilege to be one of its stewards since 1996 and one of my responsibilities is to work with other department heads to ensure preservation of this property and its many facets.”

In its more recent past, the Seibels House and Garden has been the site of lovely weddings, celebratory events and special gatherings, an antique store and an upscale restaurant.  Along the way it’s been repaired and restored according to the fashion of the times, tastes of the families who lived here, and the technology available to make life a bit easier.  Think electricity and indoor plumbing – both innovations few would want to live without once they became available.  It was a home and still looks like one, even though Historic Columbia’s offices are on the second and third floors and one of its two old sleeping porches serves as a transcendent conference room.

Years ago, the two-room detached circa1830 kitchen dependency was excavated and remains in that exploratory state, viewed only through shadowy windows.  Another outbuilding is the circa 1895 carriage house, which morphed into an automobile garage with quarters on its second floor for the family’s chauffeur.  A hothouse for wintering plants, a well (long covered up), and hideaways for the garden added to the property’s self-sufficiency and appeal.

“When thinking of the Seibels House, you really have to see it holistically,” says Sherrer. “By that I mean including the important buildings that were historically central to the day-to-day functions of the property, namely the kitchen house and the carriage house-turned-garage, and of course the gardens in addition to the main house. These buildings remain as tangible links to former enslaved people and later 19th and early 20th century paid domestic workers who were integral to the site’s daily functions.”

And as life changed all around Columbia, the homes on Richland Street adapted as well – more or less according to the fortunes of the neighborhood.  Why didn’t it burn during Sherman’s march on the city?  Nobody knows for sure, although it was in an area that was largely spared. (More buildings were burned along Main Street and in what is now known as the Vista.) Another home related to the family was built on the property between 1872 and 1883, but demolished about 1920. Why? Much remains shrouded in mystery.

What isn’t mysterious is the enduring bones of the house and garden – charming and inviting – and for those who know architecture, all of its iterations were worthy of note. In the early 1910s, Columbia architect J. Carroll Johnson added Colonial Revival elements, a solarium, sleeping porches (providing cool respite from Columbia summers), dormer windows, brick veneer and a two story port-cochère on the rear of the house.  A refurbished piazza and improved gardens added to the livable space. 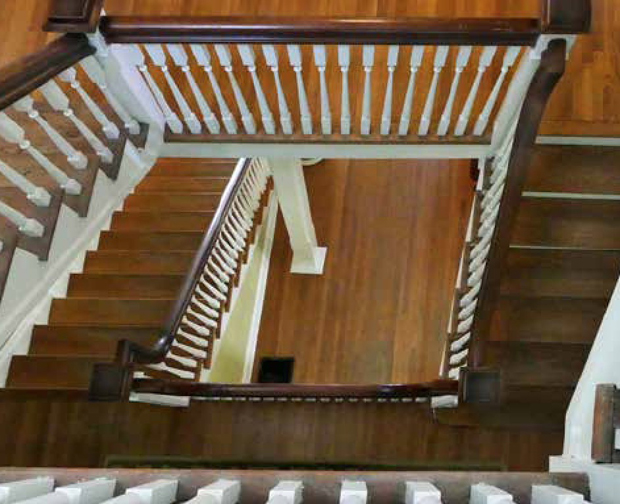 Today, approach the front door via the long porch and peek around to the side, where the outdoor space continues, next to newly planted citrus trees and greenery.  (If you’re planning a wedding, this would be a perfect spot for champagne.)  The brick veneer looks very old, and by our standards it is, but it was added during the Colonial Revival renovations from just before the First World War.

Through the front door, the foyer wows, setting the stage for what’s to come.  The ceiling features a plaster medallion, and accompanying detail from Johnson’s transformation of what had earlier been a relatively plain house into today’s architectural statement.  It was repaired and stabilized by Dillon Construction and it is stunning.  High ceilings throughout the first floor keep the rooms cool and make them look larger. Floor boards are narrow gauge tongue-in-groove oak with a sheen that’s seen thousands of footsteps through the years.

The stairway is grand and even though the upper levels are not open to the public, the stairs evoke imagining of elegant ladies and dapper gents descending to make one spectacular entrance to their guests below.

Fireplaces feature ornate mantels and surrounds.  Casement windows with lozenge-shaped glass panels, chair rails and wainscoting provide architectural details that might be adapted today to beautiful old homes elsewhere in the downtown historic district in need of a facelift. 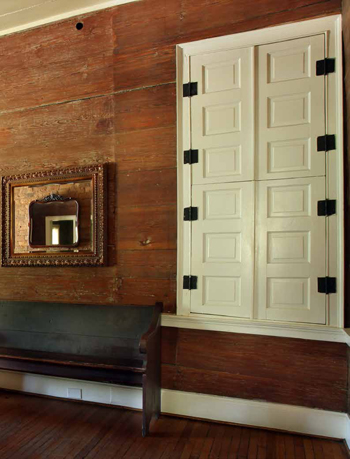 The room behind the front left parlor looks more like it would have long ago, with wooden walls and a staircase hidden behind shuttered windows.  To the right of the foyer, a large front room leads to the solarium or sunroom.  Bright and airy and filled with windows overlooking the garden, it’s been the photo choice of countless brides, and the setting for charming tea parties and soirees. In fact, it’s a great way to access the garden which is an amazing oasis in the heart of the historic district.  Pathways lead through arbors and around fountains, back to seating and historic markers.  Something blooms almost year round.  Two Deodor Cedar trees watch over the landscape.  At 100+ years old, those majestic trees have seen their share of gatherings, trysts and evening strolls in the cool Carolina air.

In 2007, the gardens were transformed with the help of award-winning contemporary horticulturist Jenks Farmer, mixing historic and heritage plants and highlighting the efforts of gardeners through the centuries. Farmer is the former director of Riverbanks Botanical Garden and the founding horticulturist of Moore Farms Garden in Lake City.  His work has been described as showcasing joyful, easy exuberance of hand-crafted gardens, a perfect description of the Seibels property.

Keith Mearns, Director of Grounds, is a steward of the plants and trees that flourish there.  Pecan and palmetto trees as well as banana plants, camellias, Indica azaleas, roses, jonquils, ivy and Pseudocydonia are a few enduring species which co-exist and continue to delight all who wander.  “A few of my favorites are the cedar trees, Camellia japonicas, and the palm trees, which are the oldest in Columbia,” Mearns said. “We also bring new plants into the garden.  A new favorite is an Empress of China dogwood, which is evergreen with white blossoms that bloom later than other varieties.”  Horticulture enthusiasts can find more in the garden database on Historic Columbia’s website.

Today, the work to protect the property continues with the help of master artisans, and preservationists, as well as those who know how to reinforce a foundation and repair a crumbling stone wall.  It’s an incredible resource for those who appreciate the contributions that historical architecture bring to an appreciation of time and place.  It’s also an inspiration for owners of historic properties who want authentic renovations as well gardeners who can see the beauty in the fullness of landscape beds and roundabout pathways. And it’s one incredible venue for a once-in-a-lifetime celebration of love, friends and family.