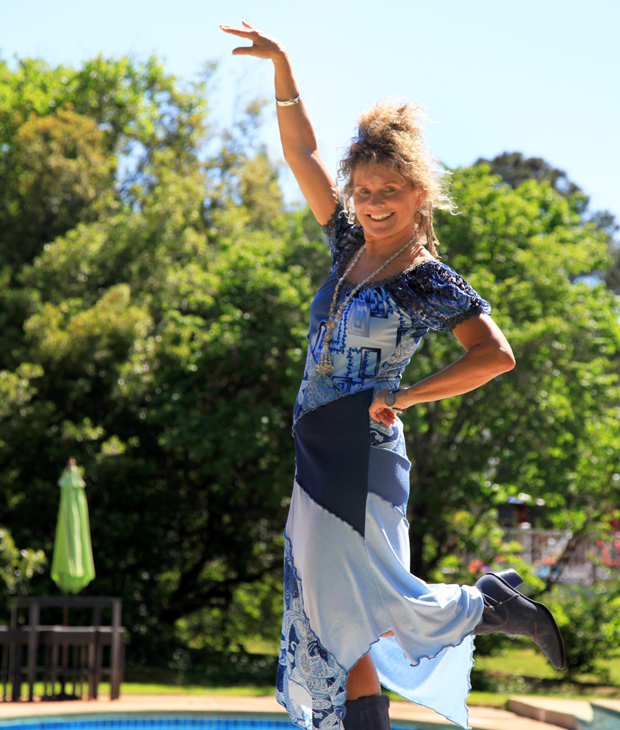 Louise Hudson didn’t start out to go global with her writing, her fashion design and her lifestyle. Maybe she just couldn’t help it. Her indefatigable energy is the first clue that this is a woman one nation could not contain.

Born in Brighton on the south coast of England, she started in journalism in the early 1980s, working for a provincial newspaper in Great Britain. She left to travel around Europe, working in ski resorts in various countries and in the Greek Islands. Since those early years, she has flourished as a fashion designer and clothing merchant, developed a travel blog, written travel stories for newspapers as far afield as the Dallas Morning News and the Calgary Herald in Canada, raised two sons and authored several travel books with her husband.

For the past five years, the Hudsons have lived in a beautiful, individualistic home in Wildewood. Theirs is a house reflecting Louise Hudson’s eclectic tastes, many experiences and multiple interests. The white chandelier in the dining room came in a box. Hudson put it together herself. The batik print on the wall came from India. The leopard-themed dishware dates to the safari-themed home the couple owned in Canada. The grounds around the home illustrate her talent for color and design. Around the home’s swimming pool – once surrounded by weeds – are the beautiful, multi-hued roses Hudson planted.

“We've just put our house on the market,” she explains as her doorbell rings and workers wander from one room to another. “We are downsizing now. The kids have left home - and we also don't want to leave behind a large house (and massive yard) when we are away next year at Semester at Sea.

“We plan to move to downtown Columbia, the Vista, somewhere like that. I will really miss my rose bushes which I have nurtured from babies - as well as our huge pool and gorgeous lake. It's one of the most beautiful, tranquil settings in Wildewood and we have loved living here with our sons. But we’re now empty-nesters.”

Life is never dull. Hudson’s fertile mind and free-flowing conversation skips from one topic to the next and the next and then back again to the first subject. Along the way to her own success and before all her worldwide travel began, Hudson met and married Dr. Simon Hudson. Now a University of South Carolina professor of tourism, he is also director of the Smart State Center for Tourism and Economic Development at USC’s School of Hospitality, Retail and Sport Management. Together, the couple leads a busy lifestyle that takes them on the road most summers.

But ask Louise Hudson the secret to success, and she responds with one word: “Ingenuity.” Her eyes flash, her curls shake and her smile widens. This topic she warms to.

Her business acumen, she says, come from her dad, a successful British entrepreneur. Early lessons from him helped her recognize the importance of branding any skill or product and the essentiality of self- promotion.

“Ingenuity plus business equals success,” Hudson says. “Without the business sense, people need marketing big time. Self promotion is very difficult. It can almost be against the nature of a creative person. They kind of hide their light, keep quiet and let the work do the talking.

“You’ve got to sell it. People may look at it, but if you want to close a sale, you’ve got to have some business, some marketing, some sales training. I get that from my dad. And my husband also knows marketing.”

From a provincial place to a global perspective

After beginning in journalism in Brighton, Hudson left England

to travel around Europe, with her husband. They worked in ski resorts across Europe and at resorts in the Greek islands; returning to Brighton in 1984 to set up a fashion business. “During my journalism apprenticeship and working abroad, I had been designing and making my own clothes – I took my sewing machine with me to France - and started selling them as all the other seasonal workers wanted my designs.

“The boutique I worked at as a sales assistant in La Plagne Ski Resort in France got wind of my designs and had me sell some of them to them, So I ended up selling some of my own 'brand' in the boutique during my evening shifts. They also found out I had a sewing machine with me, so I did all the alterations for them, too.”

When they got back to Brighton in 1984, she began the fashion business with her husband’s encouragement. Brighton was booming. Anita Roddick had recently set up The Body Shop. Simon Hudson used his business smarts, handling all the business plans, financing, marketing and advertising.

In the beginning, Louise Hudson was the designer – and at the start – also the seamstress. The Hudsons hired someone to work in the tiny shop they rented in Brighton's trendy Lanes district. They also hired a team of “rollerblading, young leggy girls to advertise our new shop around town, dressed in my latest designs,” Hudson says.

The shop took off, and soon Hudson found herself training a team of seamstresses in her sewing techniques. Her early work included experimenting with stretch fabrics and lettuce seams -- frilly, serged seams on the outside of a garment.

Six years into the Brighton business, the Hudsons decided to travel again. This time California called so Simon Hudson could earn his MBA. In 1991, he had to write many lengthy papers and a substantial thesis. Over the summer their writing partnership deepened as his wife schooled him in journalistic writing style, working to make his papers more journalistic and more readable.

“Before we left for the U.S, we fitted in another ski season,

working in Verbier, Switzerland, for Crystal Ski,” she says. “At the end of the year in the States, we worked for Crystal again, this time in Meribel, France, for the1991/92 ski season.”

Back in the United Kingdom, she returned to her clothing business. While working his way up the academic ladder, Simon Hudson earned his PhD., studying skiing constraints. His wife continued running her clothing business on a smaller scale over the next six years while also giving birth to their two sons, Rupert, now 22, and Fergus, now 19. Almost as accomplished as their parents, both young men are embarking on odysseys of their own. A USC Honors College student, Rupert majored in international business and minored in Spanish, graduating summa cum laude. Fergus, who is studying geography at the University of Calgary in Canada, has been accepted into the Semester at Sea program for next year.

“In 1999 we got itchy feet again,” Louise Hudson, says. Her husband took a professor’s post at the University of Calgary.

The move meant the couple’s dream of buying a ski chalet – beyond their economic means in Europe – came true in Canada. They stayed in Calgary for 10 years. For the first years, Hudson designed custom clothing from her home.

“Then, after going round the world with Semester at Sea --with kids aged 10 and 13-- I got back into journalism. Diary-type stories of my travels around Asia and Africa morphed into travel articles for the Calgary Herald and a few other newspapers. I then progressed to ski travel writing and was a columnist for 3 years for Snow Scene in the Calgary Sun and canoe.ca network.“

When USC sought out Simon Hudson, the couple once again packed their bags, moving to South Carolina in 2010.

“Since then I have been combining custom design with travel journalism. My clothing designs are for sale to the public at Daff-a-Deals, a consignment and private label boutique on Two Notch Road in Northeast Columbia,” Hudson says. Many women also come to her home-based showroom for individual custom designs, choosing from a cross section of samples that Hudson transforms into “something totally unique” so that the client emerges with a piece that is one of a kind.

She also runs an annual summer fashion camp, teaching local youth how to design and sew their own clothing. And in her spare time? She co-authors academic textbooks with her husband. Their works include Marketing for Hospitality and Tourism, Golf Tourism and Winter Sport Tourism, to be published in the fall.

The Hudsons recently purchased a villa in the Algarve region of Portugal. They plan to live there for a portion of each year and to rent it out in July and August. When they’re in the Palmetto State, Louise Hudson likes the idea of moving to downtown or the Vista, closer to Columbia’s restaurant, arts and culture.

Even though she can always plant more, Hudson will miss her roses. She’s grown them here and she grew up around roses in the small garden at her family home in Brighton. While living in Canada, she went to the home of another faculty member who had planted roses around his swimming pool.

Confronted with the weedy mess around the pool in Wildewood, Hudson sought advice for area nurseries and plant experts who suggested she plant double knockouts, a hardy rose capable of surviving blistering Carolina summers.

Double knockouts are “clusters,” Hudson explains. You get four at once. They start flowering in April, at the end of April. You then have to deadhead them regularly and they flower until we get our first frost in December.