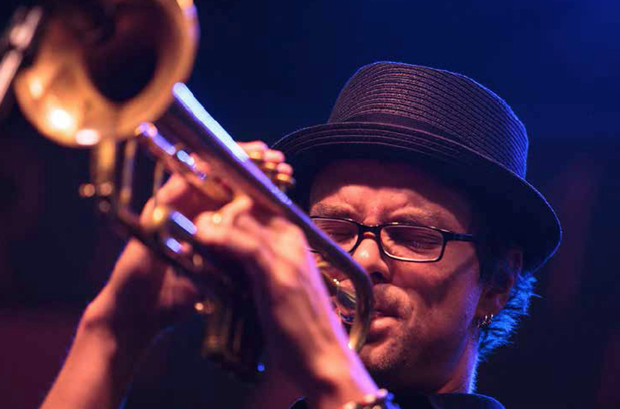 Columbia’s star jazz trumpeter and composer, Mark Rapp, is known for his rapport with appreciative fans. A dedicated artist, Mark often practices alone, to the appreciative ear of his wife – Claire Richards Rapp. Claire is a talented artist herself as a principal ballerina with Columbia City Ballet. Mark observes, “I love the art of making music. We each work on our craft at home. It is inspiring to watch her work so hard, which motivates me to keep at it.”

As founder of the ColaJazz Foundation, his greatest satisfaction is serving the community, performing for others, and promoting his favorite musical genre: Jazz. In these days of social distancing, however, normally packed entertainment venues haven’t been possible. He understandably yearns for a return to normalcy.

Describing the pandemic’s effect on performing arts, Mark says, “Jazz is a living music and is at its best when experienced together. It has been tough to be without the weekly dose of community and togetherness. However, almost immediately, I began producing live stream concerts and creating video collages which brought our jazz audience into the virtual space. We’re able to interact online and support each other.”

“While it's not the same and doesn’t compare with the human touch, it has been a tremendous experience. To date, we have presented over 12 virtual concerts paying out nearly six thousand dollars to our jazz artists during a time when there were absolutely no gigs and no money to be made playing music. ColaJazz stepped up immediately and we delivered. We will continue to deliver and serve as best we can for as long as we can.”

Happily, Mark was able to present a live jazz performance in mid-May at The Joint at 1710 Main, a downtown jazz and tapas bar. “It was far more enjoyable than I expected it to be. The band was on fire and you could tell everyone from musician to listener was bursting at the seams with energy,” he said.

As an avid composer, there is little doubt Mark will be focusing on more original compositions soon, but currently he says, “I've been too busy in service to our jazz community. The inspiration is there, but it hasn’t revealed itself in a compositional project yet. Compositions come to me when they're ready.”

He welcomed the opportunity to arrange several popular songs from the Jazz Age for the premiere performance of “Great Gatsby,” an inspired ballet production of F. Scott Fitzgerald's famous book. It was presented in February by the Columbia City Ballet with original choreography by the company’s Executive and Artistic Director, William Starrett. Mark's wife, Claire Richards Rapp, danced the lead role of Daisy.

Mark views his performance for the production as one of his most satisfying endeavors, an impressive statement for someone who has played from New York to San Francisco and abroad including performances at the Newport, Fillmore and New Orleans Jazz festivals.

“While I had one original composition in the ballet, the majority of the work was to arrange the songs to fit the story. I love arranging. It was a thoroughly enjoyable project to take a well-known piece and make it your own,” he said. Mark also composed and performed a complete original score for Trustus Theatre’s 2019 production of "The Great Gatsby," directed by Chad Henderson.

There is no question when it comes to Mark’s work ethic and passion for jazz. His presence in the jazz scene outside of Columbia, SC is deep. As the Covid-19 Pandemic began to take its toll on jazz musicians around the world, Mark was closely affected.

“Sadly, due to the coronavirus, the world of jazz has lost far more than live performances,” he observes. “We’ve lost a number of jazz greats. It has been very tough to witness. Losing Ellis Marsalis was particularly difficult. He was my mentor and I have so many incredible memories studying under him at the University of New Orleans. Saxophone great Wess “Warmdaddy” Anderson, with whom I've been working these past few years, was in the hospital for two weeks. I was so afraid we were going to lose him too.” In addition to Marsalis, trumpeter Wallace Roney died in New Jersey from the coronavirus after an illustrious four-decade career. “Wallace was Miles Davis’ protege. I am an avid fan of Miles Davis and thoroughly appreciative of Wallace’s work. Losing him was like losing Miles Davis again,” says Mark Rapp.

Having received a master’s degree in jazz studies from the University of New Orleans, Mark is familiar with the funeral march tradition. “When we finally get through this pandemic, the streets of New Orleans will be filled with respectful mourning, dirge-like sounds along with a massive celebration of life. I have no doubt jazz will be one of the most important healing experiences we will have moving forward.”

Mark was inspired to form ColaJazz to promote jazz appreciation in Columbia and to inform audiences on its value as a distinct American musical tradition. ColaJazz accomplishes that goal through events, education, recordings, and advocacy. With understandable pride in the organization’s contributions, Rapp says, “We’re determined to elevate our music scene and create a thriving culturally rich community.” As part of that calling, he also established the annual ColaJazz Festival and ColaJazz Camp featuring nationally known luminaries in the field.

ColaJazz brings performances to the Children’s Hospital, retirement centers, schools, and other groups. As examples, Rapp has presented a “Jazz for Young People” concert for hundreds of Boys & Girls Club members and a “SC Jazz Culture” concert for 2,000 elementary students. He’s especially proud of the foundation’s community summer jazz camp which serves students of all ages and instructional levels.

Those contributions are just among the most recent of his achievements. His celebrated 2009 debut album “Token Tales,” earned him a spot as a “Top Emerging Trumpeter” in Downbeat Magazine. He is also featured in the prestigious Mellen Press “How Jazz Trumpeters Understand Their Music.”  Jazz critics sing his praises. “One can’t help but sense a distinct identity to Rapp in both his composing and playing and for this reason, we will be hearing a lot more from him,” wrote a critic in Jazz Improv NY Magazine.

His fans across the globe are looking forward to hearing him again soon. As far as they are concerned, that opportunity can’t come fast enough.