Fine artist Joseph Byrnes bristles with creative energy. Comparisons between the heft of his recent industrial series and the tranquility elicited by his traditional landscapes tell you that he is a contradiction. Which suits him fine. 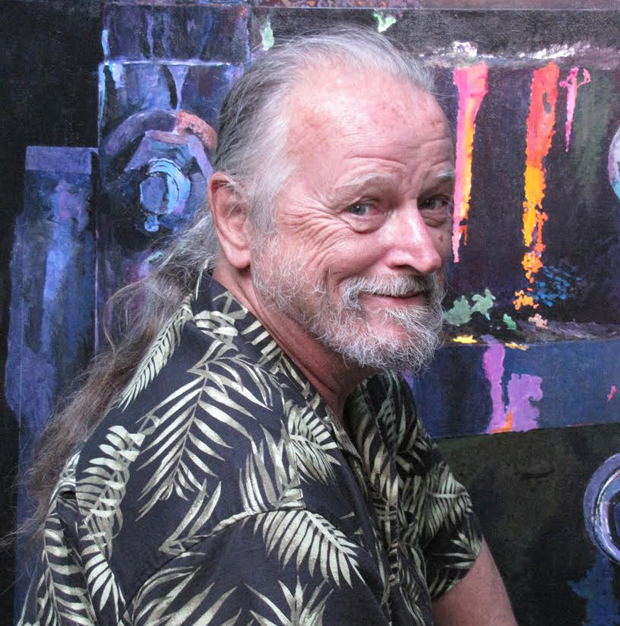 The natural kinetic energy that powers his prolific output drives him to continue evolving as a painter, employing new styles and approaches, reaching for new edges. With decades of experience in the fields of design and art, he can feel when he is gearing up for a new cusp. The most recent cusp involves abstract landscapes. Work from this output will populate his solo show opening September 22 at City Art in The Vista.

Like the first tremors of an earthquake, he “felt this shift toward abstract landscapes a good while before I started painting them.” Byrne said this style of painting is cumulative for him, bringing together nearly five decades of making art. He painted intermittently during 30 years as illustrator and designer, and in the recent 20 years has concentrated solely on painting. By studying abstract landscapes by painters he admires, Byrne inched forward toward his own cusp.

In late summer, Byrne returned to his native New York to visit family and to take in an exhibit on Southhampton, Long Island, by one of his favorite artists, Brian Rutenburg, noted internationally for his abstract landscapes. “I not only like him as an artist; he’s the kind of guy I’d like to have a beer with.”

“I think some painters find it dangerous to leave their comfort zone. For me, that would be detrimental,” Byrne said. “I am taking risks when I leave mine. But I feel I’d take a greater risk not moving toward whatever new cusp is calling.”

In answering the call of this latest cusp, Byrne departs from a recent Abstract Realism period during which his inanimate subjects were drawn from the gritty urban environment of his formative years. Byrne grew up on Eastern Long Island and in Brooklyn, NY, although he has been a Columbian since the late ‘60s. “Line is very important to me.” His attraction for line – as basis for his compositions - often drew him to nearby wharves and industrial areas where he was struck by the kinds of muscular machines that have powered America’s characteristic work ethic. His paintings from that period earned him reviews that used descriptors such as technical precision, intricate, and lifelike.

The new abstract landscapes are, of course, much looser than the highly-detailed industrial pieces.

Their common denominator is rust.

“Mother Nature just lends us this stuff and, ultimately, she wants it back.” Byrne is speaking of iron, and he does his part to restore rust to the earth by putting it into his art. “I’m referring to both the mineral, iron oxide, and the color it leaves. Think about it; it’s everywhere. It’s us. Iron from the center of our planet gives us our magnetic field. Here in the South, it’s in our red clay,” Byrne explained.

As prolific as Byrne is, you might worry that eventually he will run out of ideas of paintings. “Not gonna’ happen,” he assured. “I paint every day of the week, and I already have paintings planned out for at least ten more years, and then some.” Around his studio are posted reference materials, waiting to get onto his easel.

Collecting such material gets Byrne out into nature. “The sheer beauty I find outdoors is layered with emotional levels. I tap into that when I paint abstract landscapes. They are based on my experience with nature.”

Sometimes he goes looking for something in particular; oftentimes, he is surprised by something that catches his eye. “I’ve been told I have an unusually keen sense of observation. If something moves in the woods, I see it.”

Other times a scene he ultimately wants to paint is behind a fence, or posted by a No Trespassing sign. Undeterred, he turns a blind eye. He gets his photo shot off before the gun carrier can.

“To get photographs I’ve needed, I’ve outrun security guards with guns,” he admits, that edgy no-holds barred glint in his eyes. “I knew I could make it back under the fence and to my car before they could get within shooting range.”

He thinks about those close calls when he notes the associated reference photographs from that episode, posted and waiting their turn to be added to his extensive body of work. “I may pull out just a detail of the entire scene. An edited view can be much more powerful than a painting of the entire scene. I have been told I’ve mastered the art of cropping.”

The kinetic Byrne works most often in fast-drying acrylic, although he has – and will work in any medium. He described his process. “I like to do sketches and take color notations on location, then continue working on them after I get back to the studio,” where he works out a composition, applying ancillary skills from his design background. “I know how to make viewers look at what I want them to see.” He said, “Sometimes it was the color field that first captivated me. Sometimes a shadow can be the entire design of a painting. I block in my work before I begin adding any details. I don’t compromise where color is concerned. I know instinctively where to concentrate color.”

In numerous ways Byrne finds himself at a new cusp each time he begins a painting, even though he has thought the piece through – sometimes for years in advance – long before his sketches go down, long before he picks up the first brush or wipes off the first application of pigment. “The public never sees the paintings we artists scrape off.”

Byrne from time to time is asked by patrons observing his work: “Why don’t you paint people?” “I tell them, ‘The people are there; I don’t have to paint the figures. You just know they are there. Represented invisibly are the builders of the machines whose parts I painted, people behind the windows of that New England church I captured, people who vacationed in that beach house now being eaten away by termites. Their stories are all there. You add to their story when you look at the paintings.”

Another question Byrne fields fairly often is: “Who’s your favorite artist?” “I could say that Abstract Expressionist Franz Kline is my favorite, or mention Kandinsky, de Kooning, or Jackson Pollock. I grew up with all those and more at my disposal. New York’s great museums and private galleries were no more than a few subway stops from my home.”

Instead, Byrne takes the inquisitor off guard by answering: “Music. I like all kinds of music.”

Catch his latest work while the current evolution is in force.