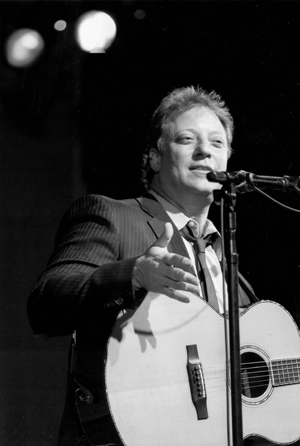 The story of how a Lexington man came to be an Emmy Award winner began decades ago, as most success stories do, when he was just a little boy. Jon Michaels began playing guitar and singing at the age of ten and fell in love with performing music. In time, he added piano to his repetoire and years later, as a young man, he found himself where many aspiring American musicians gravitate – Nashville, Tennessee.

Michaels spent nearly 20 years in Nashville, forging a successful career as a performer and songwriter for household names such as Keith Urban, Ty Herndon, and Clint Black. He performed with or opened for the likes of Michael McDonald, Paul Williams, Keith Urban, B.J. Thomas, The Kingston Trio, … the list goes on.

Michaels had many near breakthrough moments as a performer in his own right and came within inches of his own record deal more than once too, but as he put it, “luck is necessary,” and for him the timing never seemed to be quite right. As is his nature, he took the hand he was dealt with good cheer and jokes at his shows, “I used to think that by the time I was at my age now I’d be a household name. I just didn’t know it would be my mother’s household.”

His name may not be in the bright lights (yet), but fate makes it clear that his journey is far from complete.

In 2001 he booked a show at The Bluebird Café, a legendary and intimate 90 seat venue in Nashville where several famous acts have been discovered including Garth Brooks and Faith Hill. Michaels played his show and offered copies of his self-produced CD for sale to the audience. A few days later he received an email from Christina Pirello, the then star of a PBS cooking show called “Christina Cooks.” She’d been at his show, fallen in love with his act, and had a vision of him performing on her show, simply sitting on a stool and playing music while she cooked. He immediately agreed, thrilled at the opportunity to market his new CD. However, his excitement was to be short lived.

Christina soon called him in tears. Her sponsor had backed out of funding the next season of the show, the one Michaels was to have been featured on. Her attempts to find a new sponsor were failing; hope and time were running out. Little did she know, Michaels had a background in marketing, business, and finance – a former career path he’d forsaken to pursue music. He offered to find her a new sponsor at no cost up front if she would agree to pay him a commission and give him his airtime. She agreed and Michaels got to work, eventually finding her $300K in sponsorship money. He pocketed his commission, got himself out of debt, and was performing an original song for each episode plus the theme song to rave reviews from the television audience.

For his second season with Christina Cooks, he struck her a deal with Whole Foods, and raised almost $1 million in sponsorship money between that show and another PBS show he’d begun fundraising for.


After three seasons with Christina Cooks, things began to unravel naturally, as they sometimes do, and he knew it was time for him to part ways with the show – amicably and with no hurt feelings. “Our time together had come to a pass,” he said. He’d met his now wife, Jeanie Michaels, a road manager for various acts, during this time and they married in 2005. The couple soon welcomed a beloved daughter, Jennings, and with the focus shifting to family life, Michaels determined it was time retire from going on the road, which meant putting music on the backburner indefinitely. It was a decision based in love, but a tough one for any musician to make. Michaels was no exception.

The family moved to Lexington where Jeanie’s parents lived, and Michaels continued to sell sponsorships for PBS from a home-based office until the global financial crisis of 2007-2008. He then, dejectedly, re-entered the corporate world as a stockbroker for Merrill Lynch at the age of 50. “At 50, most guys are looking for a way to get out of the corporate world, not get back in,” he said. It was a stressful job and he got laid off in 2012.

Unemployed and uncertain of his future, music came to the rescue when he received a call from a friend one morning, alerting him that the Today Show was running a contest for viewers to write their 60th anniversary theme song. His knee jerk response was that he “didn’t do contests,” but with not much else going on he said, “what the heck,” and pulled out his guitar. His friend Dianah Brein helped him co-write the song which wound up to be about a minute in length, and Michaels performed it in his kitchen with his wife recording it on an iPhone and sent it in to the Today Show.

He woke up one morning, still unemployed, to a call from a 212-area code: New York. “There was only reason New York could be calling and that reason was the Today Show,” he said. The caller informed him that he and two others had been chosen as finalists and asked him to travel to New York to perform his song live on the Today Show. He did just that, performed the song for judge David Foster on live television, and won the contest.

After this surprise success he played with the idea of writing jingles for a living but soon found the online market was oversaturated and instead went to work selling insurance for the next three years. In 2017, after the economy recovered, he went back to PBS and caught wind of a promising new documentary in the pipeline, “Cyberwork and the American Dream,” which was to document the Artificial Intelligence revolution and needed sponsorship money. After sharing his prior PBS credentials, he was hired as Executive Producer of the show.

Right away Michales knew he wanted to land a big fish for show and his gut said, “Microsoft.” He also knew he would have to go through about a million gatekeepers at the massive company to get to a decision maker and came up with an unconventional plan of action. He did a web search for articles on AI written by Microsoft engineers, found one, wrote the author, asked him to view the show’s sizzle reel (a short promotional video for a television series or film) and marketing materials. “If you like it,” Michaels asked, “will you forward it internally?” 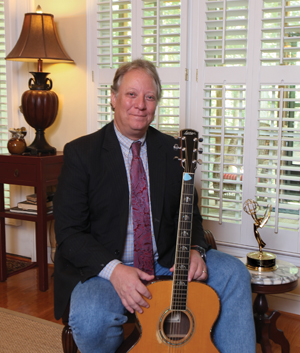 It took some time, but within six months, Microsoft committed six figures to the show’s production costs. The documentary aired in April of 2019 and immediately started winning awards up and down the West Coast, but by then Michael’s work on the show had been long done and he’d moved on to other projects.

Fast forward to fall of the historic year 2020 and he was shocked to receive an email from one of the cast members of the show alerting him that the show had won an Emmy in the category of Education/Information and asked where she should mail his trophy.

It took Michaels some time to accept that he deserved the award, that he’d earned it. But in the realization that without the Microsoft sponsorship the documentary may have never happened, he has come to take ownership of the honor. Another show he fundraised for and wrote the theme song for, Born to Explore, also won 5 Telly Awards this year.

The experience has given Michaels a new lease on life, “Every day is a new day. When you feel like giving up, just know there are things percolating for you out in the universe and you’ve got to stay in the game. So many times I was scared out of my mind, but I took leaps of faith and its’ mind boggling how things have all come together.” He has many nuggets of wisdom to share with dreamers everywhere, but we will leave you with this last one: “Opportunity and preparedness meet at the same intersection and necessity is the mother of invention.”

Congratulations to Jon Michaels on his achievements and safe travels on this journey of his that is far from complete.