From Chile to Rio 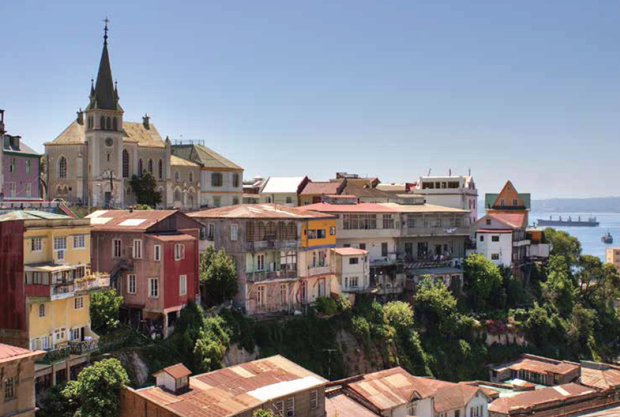 When we boarded the Crown Princess in Valparaiso, Chile, we weren’t prepared for the multitude of colors and diversity of landscapes we’d experience.  Taking this voyage with my wife Karin and son Joseph was on my bucket list.

The first stop, looking out over the Strait of Magellan, was Punta Arenas, a very prosperous and major port before the Panama Canal was completed.  The ship passed an assortment of fjords and channels of Tierra del Fuego, showing its abundant flora, maritime mammals and countless glaciers.

In Ushuaia, Argentina, we traveled to the Ensenada Bay via a short ride in a vintage railroad.  A very romantic moment and fine scenic splendor at the end of the world as we traveled through the fjords and crystalline glaciers of Patagonia during Christmas!  We drank a bottle of Mumm Cordon Rouge Champagne and watched the sunset facing Cape Horn.

The Falkland Islands offered a blend of the Bermuda and Nassau Islands in an environment reminiscent of its British heritage with typical red phone boxes and a handful of English pubs.  No English draft beer, to our disappointment.  The war that lasted just 74 days between Argentina and Britain in 1982 left many major battle sites that can be visited.  And like Bermuda, the Falkland Islands have a large graveyard of ships, including the Lady Elizabeth, built in England in 1869.  The 228-foot vessel, declared unseaworthy, can be found in the back of the bay.

Afternoon tea was original.  On our balcony, we enjoyed a small bottle of Chateau d'Yquem 2000 as we looked over the majestic bay of Stanley, the Capital City of the Falklands.

Buenos Aires was not our favorite stop but had its moments.  We took a bus to the magical Recoleta Cemetery to pay respects to the legendary Eva "Evita" Peron, then passed through the imposing city square and Casa Rosada, and ended in the Boca district, with its multi-colored houses that gave birth to the tango.

The next day we woke up in Montevideo, Uruguay.  I visited the memorial of the "Graf Spee."  The German ship sank just outside of the harbor of Montevideo.  A small flea market was next. We returned in time to attend a private wine-tasting.  Chateau Quintus 2012 from the Clarence Dillon Estate in the Bordeaux region was by far the winner!

Our final stop was Rio de Janeiro.  Hugo, our private driver, took us on a tour, which included the iconic St. Sebastian Cathedral, with a unique pyramid design capturing the visitor's attention with its energy and interior magnitude.  The Copacabana was our base, with sweeping views of Rio and the white sand beaches.  The top of Corcovado Mountain, with the statue of Christ the Redeemer, is truly one of the 7 Wonders of the World!

If you go, sample the city’s best churrascaria, Brazilian style BBQ, located at the Iberostar Hotel when you enter Copacabana Beach.

The VIP lounge of American Airlines was a welcome respite before flying home.  The food easily rivals that of a 3-Star Michelin in Paris.  Complimented with exquisite Brazilian wines, it was a moment fit for a head of state and a fitting end to an exotic and visually stunning getaway.