Wander through Ron Weathers’ gallery, and you’ll discover the places he’s been and the themes that stir his soul.

It all began with a little boy’s frequent asthma attacks and the paint-by-numbers kits his parents brought home to keep him occupied.  “Even though that’s the process which got me started, I soon decided I didn’t need the numbers and lines and began painting scenes on my own,” Ron said. “Later, I was encouraged to take art classes in middle and high school, and I still thank those first teachers – Mrs. Webb and Mrs. Rowe – who inspired me.”

Raised in Cayce, Ron graduated from Airport High School, graduated from Midlands Tech with a degree in Architectural Engineering, and went to Clemson University, where he graduated from the College of Architecture.  He was still attracted to visual creations but from another perspective.

“I started Weathers Construction Company and married Carol,” he said.  “We moved to the Lake Murray area near Chapin and had two children, James Allen and daughter Ashley.  Painting took a back seat while I grew the business and helped raise our family. I still had the desire to paint but didn’t have the time to pursue it.”

Twenty years passed, and Carol encouraged Ron’s art by signing him up for Ed Crews’ watercolor class taught at Chapin Recreation Center.  “I had never painted in watercolor but decided to give it a try,” he said. “My love of painting was reignited, and I took more classes from local artist Tommy Thompson.”

The more he painted, the more he wanted to learn, so he began to seek opportunities for workshops with a variety of watercolor artists, including Charles Reid, Tony Couch, Don Andrews, Margaret Martin, Tony Van Hasselt, Tom Lynch, Sterling Edwards, Steve Rogers, and Alvaro Castagnet.

“After more than 18 years, I was inspired to revisit painting with oils, my original medium,” Ron said. “I watched a local oil painter, Rob Shaw, complete a piece with a palette knife, and I was intrigued.”  He joined the artist’s class and compared how different oil and watercolor painting and outcomes were.

“It took some getting used to, but I found it easier to paint with more of an impressionistic focus,” he shared.  “So, of course, I sought workshops and classes to learn techniques.”  His instructors included Roger Dale Brown, Patrick Saunders, Marc Hanson, Kim English, Cindy Barron, and Bill Davidson.  However, he didn’t leave watercolor work. “I love the transparency of the colors, allowing the white of the paper to reflect through the paint.”  Ron says that the mixing of colors on paper often brings unintended results that can be beautiful accidents.

Before beginning a painting, he chooses a subject, usually from a photograph he has taken.  He likes to create a thumbnail sketch of the scene to determine how to position and crop the image. “I determine the big shapes and decide what will be light, medium, or dark in value,” he said. “I draw a pencil sketch of my scene on the watercolor paper and place the first wash of paint on the paper, being careful to protect what will remain white. “ While the first wash is still damp, he adds additional layers of colors to allow them to blend.

More layers of color are added, and after the paper is dry, he uses paint with less pigment to create hard edges. 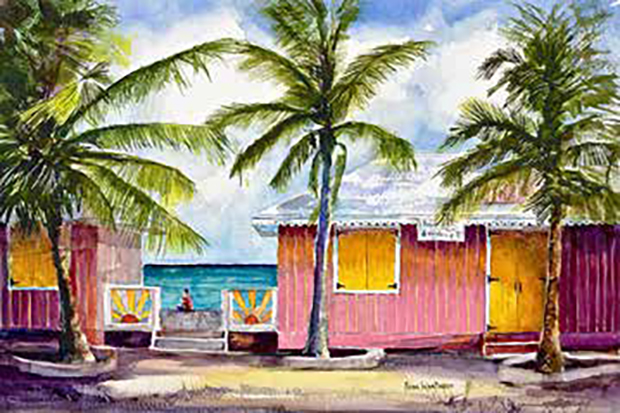 Painting with oil is completely different, but after going back and forth and continuing in both mediums, he thinks that, perhaps, he prefers oil.  “Oil painting is a bit more forgiving, mistakes can be covered more easily, and portions of the work can be altered and adjusted on the canvas,” he said.

Traveling gives Ron more subjects, and he has recently begun to paint outside, “en Plein air.”  Once a year, he travels with a group of fellow painters and instructor Bill Davidson to Pawleys Island for a week.  “I have met artists from throughout the United States,” he says.  “It’s like art camp, with great southern food and wine.” He usually returns home with eight to 10 paintings, making it a very productive week.

As wife Carol says, “He doesn’t stick to any one type of painting because he enjoys it all.”

“My art has become a visual record of my life,” Ron says. “I hope my work points to the One who gives my life meaning and value – the great creator, the maker of beauty and life, and the ultimate artist.”

Ron Weather’s work is on display at his gallery in West Columbia at 2543 Morningside Drive. Open by appointment and Monday-Thursday, 8 am-5 pm. Friday 8 am-12 noon. Paintings can be viewed and purchased online at ronweathers.com