The abstract portraits of Bonnie Goldberg 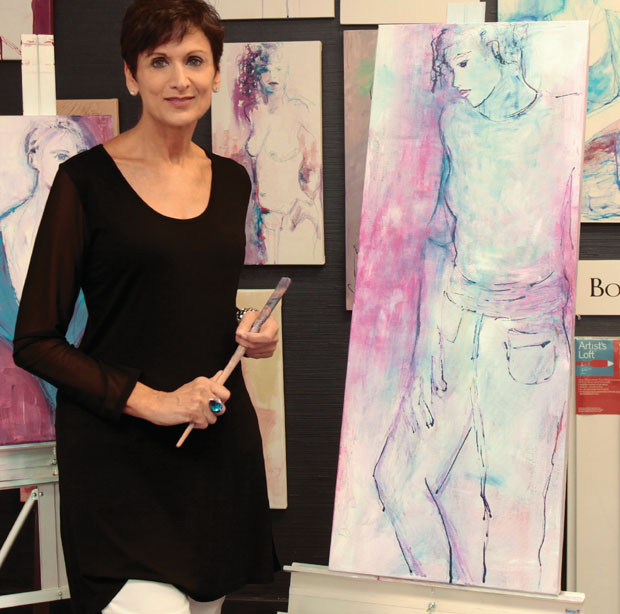 Acclaimed for her gestural brushstrokes, painter Bonnie Goldberg captures the inner self of a subject by applying her most revealing gesture to the canvas – often with a colorful stroke of attitude – making it a key element of the painting.

Creativity and technique – self-taught and learned at the elbow of renowned artists – flow from her brushes, bringing to her surfaces subliminal messages. With only minimal marks on her canvas, and with minimal paint, Goldberg somehow fully introduces her subjects, and allows viewers to know her nuances, even though face and form are abstracted in such a way that only intimate acquaintances would recognize the identity. “I believe it is important to engage the viewer in a work of art. I see a portrait as collaboration among the subject or model, the artist and the viewer,” the painter said.

But even before a viewer sees the portrait, the subject knows right away, upon her own first glance at the finished piece, that Goldberg has “gotten” her, has seen into her quirks or vulnerabilities and interpreted them as strengths. As beholder first and painter second, this artist finds beauty within, and once the portrait is done, the subject then must own up to being beautiful. From such an inner source, strength and confidence arise. From such a portrait, proof is evident.

An internal eye allows Goldberg this extra dimension – of seeing beneath the fabric of skin. “I don’t know where it comes from, but I recognize that I have this gift,” Goldberg acknowledged. She coaxes it to the plane in ways she has learned over decades of painting from life. “When a subject arrives at my Arcade studio, we get acquainted by walking around, looking at other paintings I’ve done, and talking.”

Because Goldberg’s work takes her to the figure as it moves in space, the painter breathes in what the subject responds to “and, at the same time, I immerse myself in her gestures. That is what is important to me in my work - the gesture of her.”

In an attempt to describe her indelible process, Goldberg says: “I take out the detail and try to capture - in the smallest lines - the spirit of the movement. That’s what I try to achieve as I draw; that’s what I feel the pose is about. From the subject’s gesture, I try to translate the essence of who she is - in that moment in time. I say “her” because throughout most of my painting life, subjects have been female, although I enjoy painting the male figure as well, and am accepting more of those commissions lately,” Goldberg said.

When the painter is satisfied she “has” the subject, the two settle into decisions: a comfortable pose – and what music will play softly in the background. “The subject chooses both.” Goldberg’s intuitions about her subject come into sharper focus as those choices are made.

“It seems that subjects respond to music, just as I do. To me, music is the ultimate art. When someone creates something ethereal like that, it informs and feeds the art, pushes it out. I know my work is shaped by music – or is it the other way around?” Goldberg wondered. “When I am working alone in the studio, I choose music that matches how I am feeling on that day. Although my musical tastes are very eclectic, I sometimes play one song that I love over and over again, and my response to what’s playing comes through in the painting I’m working on at the time.”

So, it’s only natural for Goldberg to expect the same synergy, times three, when the subject chooses music for the painting session. “For a recent session, I had on Billie Holiday when the subject arrived; I had her turned down so low you could barely hear her, but the energy was palpable.” Goldberg senses music “focusing my work and motion from a different part of my brain.”

Within the last year, music that feeds her art also has touched her heart – especially when a ballad or some other love song came up on the play list. “Since my granddaughter Olivia was born, a lot of music I listen to has made me think of her. I was not prepared for this new form of love that I feel for her. A friend told me having a grandbaby is like having a love affair, and I now agree with her. It is so satisfying to be in this place in my life that I can give myself over to adoring this child and creating this art.”

The two – art and love – are inseparable for this painter. “As artists and as lovers of art, we understand that it is art that teaches us what is important in life and defines those moments we all have when beauty becomes reality.” That’s why Goldberg finds it so rewarding to show a woman her finished portrait. “When I have painted her, she wants to see what I see. And I see beauty.”

Having her unique beauty discovered and presented is reinforcing, empowering for a subject whose abstract likeness is caught and immortalized by Goldberg. So, naturally, the painter was drawn to a concept conjured up by poet Al Black as a way to empower and appreciate women via a multi-arts series entitled “Sense of Self.”

For more than four years Black has organized and hosted weekly poetry and music events as his specialized recipe for Mind Gravy. He chose October for a creative event to synthesize art, music and poetry – with the appreciation and empowerment of women as catalyst for all mediums.

“October is Domestic Violence Month, and I wanted to tip the month-long observance on its ear by uplifting women in these complimentary ways,” Black said. “Sense of Self'” will open at Anastasia & Friends Gallery during Main Street's October First Thursday event on October 2. “Twelve female artists, selected by Bonnie and Anastasia Chernoff, will create original works reflecting or representing the topic. I will select three female poets and three female singer/songwriters to perform original works in response to the topic.

“For the next element of this series, I will select three male poets and three male singer/songwriters to perform original and topical pieces for the Tuesday, October 14 observance.

“And, for the final performance, Tuesday, October 28, I will select several female and male poets and singer/songwriters to create new pieces based upon their responses to the exhibited art and previous two performances.” Black said he is finding collaborations inherent in this series “exciting and humbling.”

Goldberg already has completed her entry for this exhibition. “I borrowed the title of this piece from Emily Dickinson. It’s called ‘I’m Nobody. Who are you?’”

More of Goldberg’s work can be seen in Columbia at her Arcade studios, at Paul D. Sloan Interiors, at Ellen Taylor Designs and also at wwwbonniegoldberg.com