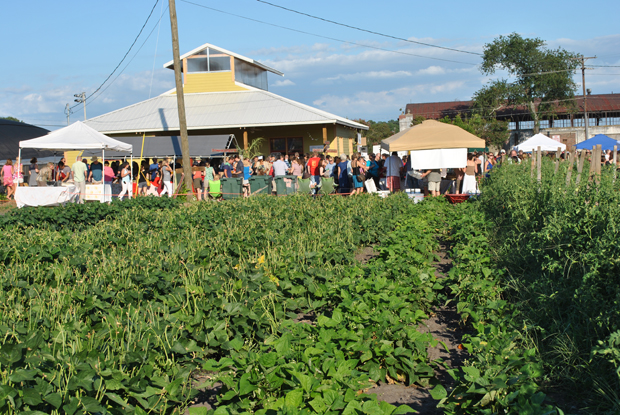 Imagine biting into a banana not flown in from Latin America but grown right here in famously hot Columbia. It’s already happening, but not yet on a wide scale. A number of area urban farming enterprises are enabling people to purchase a variety of fruits and vegetables that they once could not find locally.

“We are actually growing dwarf bananas, papayas, and pineapples in our greenhouse,” said Matt Kip, manager of the University of South Carolina’s Sustainable Carolina Farm and Garden.

USC hired Kip to launch its first community garden on campus about 10 years ago. Since then, the operation has doubled in size. Yet it’s still quite small in relation to more commercially oriented agribusinesses. Sustainable Carolina only sells produce on campus to university chefs and through the Healthy Carolina Farmers Market.

“What’s popular depends on the time of year,” Kip said. “Carrots have always sold very well. We also do specialized items like fava beans, which are hard to find in quantity locally. We grow different types of basil – things chefs have a hard time finding. For now, we are growing only small quantities. We would hope to ramp up production eventually. … One day we could be the only grower of local bananas!”

Sustainable Carolina is staffed mostly by student volunteers, and many of them devote their time to urban farming even after leaving USC. “I always tell people to watch out. You can catch the urban farming and gardening bug,” Kip said. “Students from all walks of life end up at the garden for different reasons. A lot of students have worked for our garden and moved on to intern at City Roots.”

City Roots is perhaps the best-known urban farming operation in the Midlands. Established in 2009, it has gained a lot of popularity through the special events and public festivals it hosts on its original property near Owen’s Field Airport in the Rosewood community. Robby McClam founded City Roots, and his son, Eric McClam, manages it. Both share a resolve to educate and involve members of the community in propagating fresh, wholesome, sustainable organic crops.

“Urban farming is important because of the direct connection to the customer,” Eric McClam explained. “They can see where and how their food products are grown. It’s a unique opportunity to see a working farm and to know their farm and their farmer.”

City Roots produces more than a dozen types of microgreens — the youngest, most tender shoots of vegetables such as arugula, kale, Swiss chard, and watercress — which are coveted by fine-dining restaurants for their robust color and flavor. In fact, microgreens are City Roots’ most widely distributed product.

Festivals such as the annual Palmetto Tasty Tomato Festival, Mardi Gras festival and parade, the Cream of the Crop Beer Festival, the Rosé Festival, and others, have brought many people to the farm who might not otherwise have been compelled to visit.

While on the site, visitors can tour greenhouses, step across rows of growing plants, see free-range chickens, view the aquaponics system —which combines fish production (in this case, tilapia) and hydroponics (grown in a water medium) — and even photograph giant sunflowers when they’re in season.

Early on, City Roots entered a three-way partnership with local restauranteur and chef Kristian Niemi and the Farm to Table Event and Catering Company, which conducts a monthly, often sold-out Harvest Dinner series at City Roots and other locations. The dinners bring together local chefs and local farmers.

“When we started, there was not a tight community of chefs that worked together, and the farmer-to-chef gap was pretty wide, with a few pioneers trying to use as much local as possible,” explained Vanessa Driscoll Bialobreski, managing partner with Farm-to-Table. The city was just beginning to embrace sustainability and local food with the first local farmers market at 701 Whaley Street. “Since then, we have brought over 50 chefs out to the farm to meet the community and work with other chefs on events.”

Farm-to-Table is completing work on a certified catering kitchen where it will prepare market meals and offer cooking classes to help people learn how to use the products they buy through Community Supported Agriculture (CSA) memberships and at the farmer’s market.

“At every event, we ask the attendees how many people were experiencing their first time on the farm,” Bialobreski said. “Usually it is about 50/50 on who has never been to the farm or to a Harvest Dinner. So with each event, we are still bringing new people out to the farm.”

“Farm-to-Table is our signature event,” McClam said. “It’s also my favorite. There can be as many as 100 people, but the gathering still feels intimate. People get to experience the farm and hear both the chefs and farmers speak.”

The initial three-acre City Roots farm in the heart of Rosewood has expanded to five acres and, only a few months ago, added some serious real estate with some 30 acres of land off Bluff Road. “You could say we’re now urban and rural,” McClam said. “We harvest the bulk of our vegetables on the rural site and produce our high-dollar, intensively cultivated products here at City Roots.”

With education always top of mind, City Roots this year offered its first Summer Camps for Kids, where children can see firsthand how a working farm operates and learn about such things as composting, which not only enriches the soil but reduces waste sent to landfills. They learn how local products support the local economy and are gentler to the environment because they don’t have to be trucked or shipped anywhere.

“The majority of urban farms have an educational component,” McClam said, adding that he loves to see the light bulbs go off in children’s heads. “It’s really neat when children visit, especially when we pull a carrot out of the ground. They can’t believe that it didn’t come out of a bag from the grocery store. It opens a lot of eyes. The kids really enjoy seeing where their food is coming from.”

McClam says there isn’t really much competition. It’s all about community and mentoring one another, with everyone supporting one another’s ventures. When Robbie McClam was starting out, he structured his planning around the business model advanced by Growing Power Inc. and received local support from his friend Ben DuBard of Walter P. Rawl and Sons, a very successful, longtime farming operation headquartered in Pelion.

The McClams, in turn, pass along their guidance and knowledge to others coming behind them. Scott Harriford, owner of Jah Roots Consultants, says the McClams helped him develop his first hydroponic project. Now he has a firm that consults in hydroponic enterprises and offers grant-writing services.

Harriford plans to launch Urban Fresh Farms, a hydroponic farming operation, within two years in downtown Columbia. “The main issue is funding,” he said. “The other issue we have is the need for community education. People tend to negatively associate hydroponics with growing illicit plants.”

He envisions Urban Fresh Farms producing mostly organic lettuce grown hydroponically indoors. Once up and running, the facility will supply local groceries and restaurants and have a retail operation as well.

“The main advantage of hydroponic farming is the ability to repurpose your space,” Harriford explained. “For the farmer, there is a shorter life cycle with hydroponics. A regular crop of lettuce may take 30-90 days. The same lettuce grown hydroponically could take 27 days or less, and it’s independent of season.”

Hydroponic urban gardening is catching on in Northeast Columbia as well. Urban Garden Hydroponics has been quietly operating on Two Notch Road across from Sesquicentennial State Park for almost six years.

“Our business is mostly for the home hobbyist market,” owner Gary Birchfield said. “We support hydroponic and organic gardening. This can be done indoors or outdoors. We carry gardening products that you can’t easily find in big box stores like Lowe’s or Home Depot.”

Birchfield said he has seen a marked increase in interest in hydroponic and organic gardening in recent years. “I think people are realizing that we are what we eat,” he said. “People want to know what’s in their produce and what’s on their produce.”

Clearly, urban farming in Columbia is prospering without conflict associated with competition. There’s a common sentiment that everyone is in it together.

“We all have the goal to get locally grown food in the hands of families,” Harriford said. “We are all working for the greater cause.”