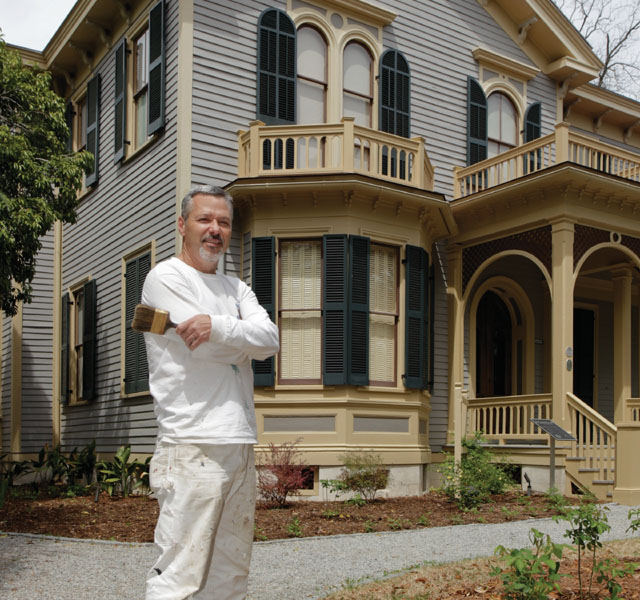 As a history lover, Charlie Flake knows details often bring a story to life far better than a broad overview. His hand in re-telling the story of South Carolina’s only presidential site was a steady one. The paintbrush he wielded in restoring the faux-grain woodwork at the Woodrow Wilson Family Home was sure and steady – and informed by history pre-dating, by many centuries, the late 19th century Italian villa-style home recently re-opened by Historic Columbia (HC) at 1705 Hampton Street.
Determined to get the artisanal details just right, Flake returned to the recorded beginnings of faux painting. “Decorative painting has been highly regarded since at least as early as the 15th century,” said Flake, whose artistic wife, Joy, often surprises him with books about his favorite painting form and its long history.

“Before we started the job of returning the woodwork in this home to the finishes in popular use in 1871, there was a lot of research to be done,” said Flake, whose recreational reading enhances his work: restoring historic paint finishes with Palmetto Decorators.

“The foundation brought in Christopher Quirk, an architect who specializes in historic preservation at John Milner Associates, Inc. A scientific paint analysis determined not only what paint colors had been applied originally but also that faux graining had been used extensively in the home.” Flake pointed out a research spot, left visible to visitors in a bedroom upstairs, showing many layers and colors of paint, applied over years of occupancy.

“Christopher verified what colors would have been used in 1871, but for the woodwork, doors and mantels, I did extensive study on my own so I could replicate the techniques early painters would have used to get the effect of fine wood grains,” Flake said.

Fielding Freed, Historic Columbia’s director of historic house museums, explained: “Although the Wilsons built a grand home – the Italian villa design they chose was as stunning then as it is now – the family was not wealthy. However, they wanted their home’s pine wood millwork – window sashes, wainscoting, doors and doorframes – to look like a more expensive wood, and faux graining allowed the Wilsons to have that without the high cost.”

So that the original pine wood, used in many places throughout the home, took on the rich color of mahogany, Flake patiently dry-brushed a fine grain onto the surfaces. Freed repeated a compliment Quirk paid when he saw Flake’s meticulous work: “Christopher said Charlie’s work would stand up and show well in any historic house with which the firm might be associated.”

Flake’s allegiance to detail is owned in part to his former military experience, working on mechanical objects. “Before I touched my brush to any surface, I had to practice and test. Any small piece of wood that had to be removed, even if it was damaged, gave me a little surface to test my pigments and graining on. I was constantly picking up broken pieces to test on; the workmen saved me anything that had to be replaced.”

Flake said testing his combination of gel stains, oil and latex glazes on surfaces comparable to one they were to go on was critical to restoring the finishes Jessie Wilson, mother of the future president, surely told the home’s original painters she wanted.“The base color for everything is papaya, a fruit that would have been exotic to Americans in those days,” Flake said.

Research HC conducted indicated the Wilsons’ intention to remain in Columbia, but Dr. Wilson was re-assigned to Wilmington, North Carolina about three years later. This was the only home the family ever owned.

When Flake got to the mantels – every room in the house has a fireplace – he employed techniques from the trompe l’oeil school of art more so than from faux graining. “The original homeowners would have wanted marble, but what they had was slate. I used a turkey feather to marbleize the downstairs mantels,” said Flake, who hunts turkeys in the Swansea area where his family has lived for generations.

To complete the fire surround, “We really got lucky when it came to replacing a few tiles in the hearths,” Freed remarked. “The English company that made the originals is still in business, so we were able to purchase the few needed. We all were amazed at how that worked out!”

Being part of an historic restoration is an effective way to learn history, according to Flake. “I certainly learned a lot about Woodrow Wilson while working on this project,” Flake said. “Hearing the HC staff referring to our 28th president as Tommy soon had me calling him Tommy as well. You get to know a good bit about people and their taste – and the styles of the times – by the choices they made for their homes.”

The home had only three owners in its 130-year history, a point Freed says partially accounts for the relatively good condition of the original lathing and plaster. However, years of water leaks in the roof resulted in HC embarking upon the restoration effort that spanned nine years.

“This property has operated as an historic house museum celebrating the early life of Woodrow Wilson since 1933. Structural issues brought about the close of the house in 2005.  What we have for the public’s renewed appreciation is the only home owned by the Wilson family, the home of the man who became the 28th president of the United States and the world’s first modern international statesman,” Freed said.

Because the residence was built during the Reconstruction era, its 21st-century interpretation mirrors that period of sweeping social change. “This is not your traditional presidential site,” said John Sherrer, Historic Columbia’s director of cultural resources, who led the nine-year restoration project. “Once these doors re-opened for President’s Day weekend, the public has been taking a renewed look at Wilson’s experience, what life was like for his family and friends, and the cultural, social and political landscape that shaped those experiences.”

For information on visiting the Woodrow Wilson Family Home and its gardens, go to www.historiccolumbia.org/woodrow-wilson-family-home.