At this innovative eatery, it’s time to forget everything you may have thought about old-school vegetarian and healthy foods. 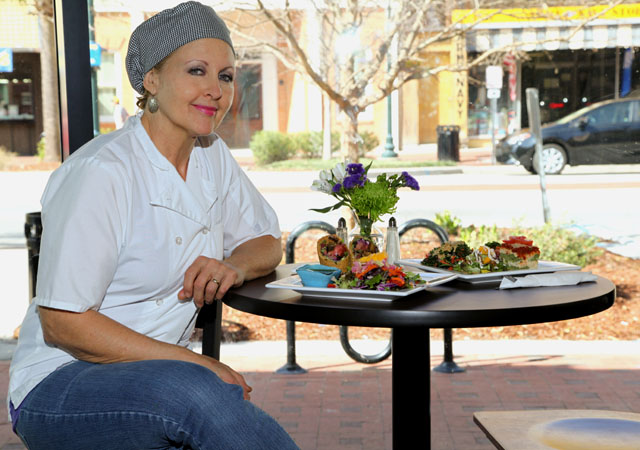 These days, creative culinarians like executive chef Sharon Wright are pushing the boundaries to devise plant-based dishes that are flavorful and satisfying, using only raw, minimally-processed ingredients.

That’s right. Everything at Good Life Café is not just vegetarian, it’s vegan, made without any animal products whatsoever. That means no cholesterol. But more uniquely, all of the dishes are raw. This means no baking, steaming, grilling, or sautéing.

Proponents explain that cooking can destroy many of the nutrients in food. Raw foods retain them. It’s a compelling concept, but how does it work?

Here are the rules: A vegan diet excludes any and all animal products, even those such as eggs and milk that are obtained without killing the animal. A raw food diet excludes foods that are processed with heat exceeding a temperature that ranges from about 115 to 120 degrees. (Dehydration is allowed.)

Even with these restrictions, there’s much, much more to vegan and raw food cuisine than simply salad. Where others might see limits, chef Wright sees opportunities.

The most popular menu items – and the ones she recommends for newcomers – are the Good Life tacos. Mild and creamy cashew nuts are ground and seasoned to replace dairy ingredients, then topped with lettuce, tomatoes, salsa, and guacamole in a flax shell. Tacos can also be ordered as part of a sampler plate that can feature tastings of entrees and side dishes from around the world. Pad Thai vegetable noodles and zucchini lasagna with dried tomatoes and pesto are just two examples of a diverse menu that also includes curry and Middle Eastern inspirations.

Spring rolls capture traditional Asian flavors and are served with spicy dipping sauces, but instead of the fat-laden preparation of their cooked counterparts, the raw versions preserve the crunch and color of red peppers, carrots, mangoes, cucumbers, avocados, kelp noodles and lettuce, all rolled together.

When they are dehydrated, slices of eggplant take on a pleasantly smoky and chewy texture reminiscent of bacon. Here, chefs roll these around chopped veggies that are dressed with a basil vinaigrette, and create a tasty, wrap-style sandwich.

Of course, the restaurant does serve salads, even a simple lettuce-and-tomato plate, if that’s what a diner desires. Favorites here include the chopped vegetable salad known as fattoush; an Asian noodle salad with mango and coconut; and a tangy, arugula salad dressed with apples, pears, and candied walnuts.

For Wright, the journey to a raw-food lifestyle was personal. A Columbia native, she grew up eating traditional Southern fare but as a child was often sickly. In her teen years, she ate junk food the way most kids do. In adulthood, she struggled with post-pregnancy weight. Eventually, she found her way to experimenting with a macrobiotic diet, back in the ’90s during a time her grandfather was battling cancer. A few years later her father became ill, as well. That was when she started juicing. Those losses, combined with a new energy she was beginning to feel, motivated her to learn more, put her knowledge into practice, and share it with others. “It was part of a shift,” she remembers. Now, the self-taught chef has been following a raw food eating plan for 24 years.

It’s important to note that not all vegans follow a raw food diet, and not all raw food adherents are vegans (think sushi). However, Good Life Café follows the rules of both. As a result, the entire menu is appropriate for anyone who follows kosher or halal dietary rules.

Smoothies and juices play a big role on a raw food menu. At Good Life Café, fruits and vegetables are cold-pressed with a device that exerts nine tons of hydraulic pressure. The flavors are intense, the colors are jewel-like. “Lusciousness” is a deep magenta that comes from purple cabbage combined with grapes, oranges, and limes. Green lemonade is emerald-bright with apples, cucumbers, kale, ginger, and lemons.

But just because something is good for you doesn’t mean it can’t also be enjoyable – even a bit indulgent. Naysayers will become fans after tasting a Funky Monkey smoothie made with bananas, chocolate, almond butter, and vanilla. Wright says, “I do all the desserts; that’s my baby.” Her sweet treats include a cherry “cheesecake” made with cashews and lemon glaze, a carrot cake, and a raw chocolate adaptation of the famed Moon Pie.

Good Life Café has a full bar offering infused vodkas and cocktails, including martinis made with fresh watermelon, cilantro-lime, or other fresh juices. A “Light My Fire” cocktail is hot and spicy.

Even the kitchen is different: There’s no stove or oven, and as a result, diners will never catch a whiff of stale cooking oil or burned foods. In fact, the restaurant smells fresh, like a cool, inviting forest or a shady garden.

Raw food isn’t just a passing trend, Wright asserts. Although the health impact on an individual can be difficult to measure, there’s something appealing and empowering about paying more  attention to what we put on our plates. “Food is what people are coming back to. This lifestyle; people want to prevent illness,” she says.

The original Good Life Café opened three years ago in West Columbia and it’s still going strong. In March, 2014, Wright and her business partners opened their second location, a pleasant room on Main Street that overlooks the revitalization taking place downtown. Being situated across the street from Mast General Store and the Nickelodeon has expanded the café’s reach. “People have told me,‘We’ve been waiting for you,’ ” says Wright. “I tell them, ‘We have arrived.’ ”